It's either incompetence or apathy. Either way, it's another example that both State and Federal officials truly are incapable of fully protecting the air we breathe here in Colorado.

Yesterday, 9News reported that the Suncor oil refinery in North Denver released a "thick grey-yellow cloud." Suncor wasn't abashed in admitting that "the release violated the regulatory threshold for opacity." Opacity, otherwise known as the thickness of air pollution, is used as a surrogate to measure how much harmful particulate matter is being released.

For those that don't know, the Suncor oil refinery is one the biggest sources of poisonous air pollution in the Denver metro area. According to the U.S. Environmental Protection Agency's most recent inventory, the refinery releases more than 60,000 pounds of toxic air pollution, including 20,000 pounds of sulfuric acid, 5,000 pounds of propylene, and 700 pounds of benzene, and more. To top it off, the thing spews 7 pounds of lead and 6 pounds of mercury into the air every year.

That's just what they release into the air. Together with water pollution, the refinery ejects more than 84,000 pounds of poisons into the environment.

And the amazing thing? That's not the half of it.

In the last two years, according to the State, the Suncor oil refinery has been fined more than $500,000 for clean air violations. This is on the heels of citations for violating clean air laws in 2007 and a slew of excess emissions, as well as a settlement in 2002 with the Environmental Protection Agency where the company agreed to major upgrades at its refinery to resolve ongoing air violations.

Data from the Environmental Protection Agency also shows that the refinery is what's called a "high priority violator" and that even to this day, there are air violations that remain unresolved.

This same data shows the refinery has violated water quality standards and waste disposal requirements. And to top it off, the company was slapped in 2009 with more than two dozen health and safety violations by OSHA.

So I have to say, I was a bit shocked to see how our state Department of Public Health and Environment responded today to yet another clean air violation at Suncor's refinery. According to their PR officer quoted in today's 9News story:

"It is 'highly unlikely' the emission caused a danger to public health."

And the Environmental Protection Agency? Well, according to the article, they're deferring to the State.

Normally, I'd be inclined to agree. Like when there's actually been an analysis to determine what kind of pollution released, who might have been exposed, and at what levels. You know, if there's logic and reason behind such a finding.

But "no danger to public health"? At a refinery that spews poison and regularly violates health and safety laws?

This is where the problem really comes into focus.

The Department of Public Health and Environment and even the Environmental Protection Agency approach our public health like this: Unless we show that we are actually getting sick or dying, it's just assumed there's no health risk.

Look at it this way. The whole concept of safeguarding public health is about keeping people from getting sick or worse in the first place. It's about precaution. It's about presuming that a health risk exists unless it's been proven otherwise. Yet our health officials? They seem intent on waiting for things to hit the fan.

It turns the entire concept of public health protection on its head. Worse, it puts real people at risk. Real people with jobs and families. Real people who firmly believe that the government is protecting their interest.

The reality is the Department of Public Health and Environment and Environmental Protection Agency are defending what might be the Denver metro area's most dangerous polluter. A known "high priority violator." Worse, they're putting the burden on kids, minorities, and those in poverty to prove that health risks exist.

I'll believe our health is being protected when I stop seeing clouds of gas escaping from the Suncor oil refinery. Until then, folks, don't count on things getting better anytime soon. 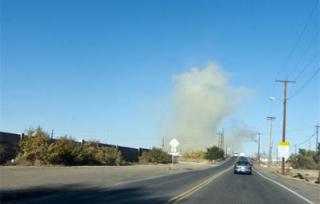