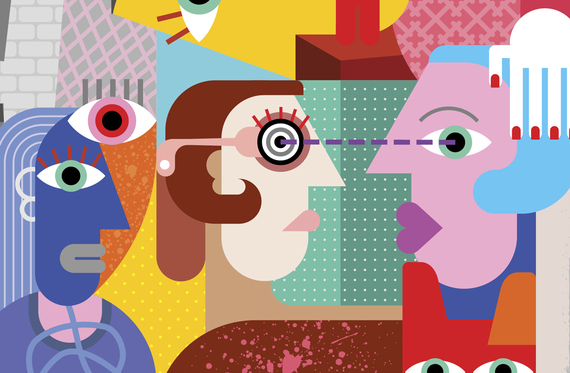 When we believe our thoughts, we divide reality into opposites. We think that only certain things are beautiful. But to a clear mind, everything in the world is beautiful in its own way.

Only by believing your own thoughts can you make the real unreal. If you don't separate reality into categories by naming it and believing that your names are real, how can you reject anything or believe that one thing is of less value than another? The mind's job is to prove that what it thinks is true, and it does that by judging and comparing this to that. What good is a this to the mind if it can't prove it with a that? Without proof, how can a this or a that exist?

For example, if you think that only Mozart is beautiful, there's no room in your world for rap. You're entitled to your opinion, of course, but other people think that rap is where it's at. How do you react when you believe that rap is ugly? You grit your teeth when you hear it, and when you have to listen (maybe you're a parent or a grandparent), you're in a torture chamber. I love that when mind is understood, there's room for rap as well as for Mozart. I don't hear anything as noise. To me, a car alarm is as beautiful as a bird singing. It's all the sound of God. By its very nature, the mind is infinite. Once it has questioned its beliefs, it can find beauty in all things; it's that open and free. This is not a philosophy. This is how the world really is.

A judging mind makes the world very small and dangerous.

If you believe that anyone's action is bad, how can you see the good in it? How can you see the good that comes out of it, maybe years later? If you see anyone as bad, how can you understand that we are all created equal? We're all teachers by the way we live. A blind drunk can teach more about why not to drink than an abstinent man in all his piety. No one has more or less goodness. No one who ever lived is a better or a worse human being than you.

A mind that doesn't question its judgments makes the world very small and dangerous. It must continue to fill the world with bad things and bad people, and in doing so it creates its own suffering. The worst thing that ever happened exists only in the past, which means that it doesn't exist at all. Right now, it's only a stressful thought in your mind.

Good vs. Bad
Good things, bad things; good people, bad people. These opposites are valid only by contrast. Could it be that whatever seems bad to you is just something you haven't seen clearly enough yet? In reality -- as it is in itself -- every thing, every person, lies far beyond your capacity to judge.

Once you no longer believe your own thoughts, you act without doing anything, because there's no other possibility. You see that all thoughts of yourself as the doer are simply not true. I watch the hand that I call mine move toward the teacup. It has such intelligence, glides through the air so purposefully, arrives at the cup, fingers close around the handle, hand lifts cup, brings it to the lips, tilts it, tea flows into mouth, ahh. And all the time, no one is doing it. The doer is quite another, the one beyond the story of "I am."

Things seem to arise, and someone with a clear mind lets them go because they're already gone. This apparent letting-go is not some saintly act of surrender. It's just that nothing ever belonged to her in the first place. How could she not let go of what doesn't exist except as the story of a past or a future?

The clear minded person has only what she believes herself to have, so she has nothing, she needs nothing. She acts and waits for the miracle of what is, expecting nothing that would spoil the surprise. When her work is done, she forgets it, because there's nothing to remember. It's done. It's gone. She can't see what doesn't exist. Was her work good or bad? How ridiculous! Did it penetrate deeply or have no effect whatsoever? As if that were any of her business! Will it last forever? Did it last even for an instant?

More:
GPS For The Soulbyron katieequality
Newsletter Sign Up
An essential daily guide to achieving the good life
Subscribe to our lifestyle email.
Successfully Subscribed!
Realness delivered to your inbox