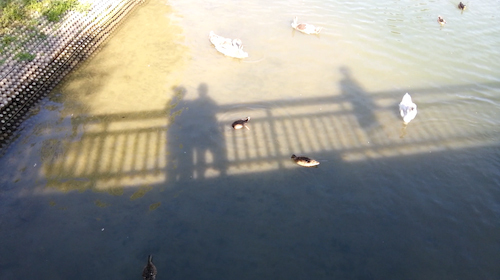 On a recent trip to France, my husband and I walked along a tiny and adorable bridge in the thousand-year-old town of l'Isle Adam, situated 20 miles north of Paris. Upon stopping to look down at the sun-dappled waterway beneath us, I noticed a pair of elongated shadows, along with the unexpected sight of three velvet white swans, elongated necks in artful, question-mark repose.

"Whose shadows are those?" I asked my husband.

"That's us," he said, waving to prove his point.

I chuckled embarrassingly. "Oh, right!" Why hadn't I recognized myself?

I've been pondering that question ever since. Right there in that same pond, ducks swam, dipped their heads in the water, shook off the excess and preened; large goldfish swirled about, grazing at plant life, routinely surfacing for stray scraps. But without warning (cue music from Jaws) appeared a speeding whale of a water rat -- brown with scraggly fur, at least two feet long with a reedy tail long enough to wrap around my waist. Ugly as ugly can be, it seemed to be aiming for one of those cute preening ducks. To my surprise, the duckling barely reacted; the rat kept on moving. As for the swans, they simply ignored the beast.

My reaction? "Ooo, look at that creature!" I pulled out my phone and recorded the whole thing. Let me explain that I live in deadly fear of rats, deem them horrid and loathsome. I know rats are God's creatures and all, but isn't God the same one who invented pedophiles? OK, different discussion. But just to make the point about my aversion to rodents, Mickey Mouse is creepy to me. Just go to Disneyland, and there he is -- a six-foot vermin who smiles a lot. Am I wrong? My point is the water rat did not repulse me, as it should have -- at least not totally. Again, I didn't recognize myself.

On Sept. 16, 2015, I engaged in strange behavior. For the first time in my life, I watched a Republican presidential debate, and hosted a gathering for the viewing in my living room! It'll be fun watching the clown parade! THREE HOURS LATER, appropriate sneer on face, I remained shocked, just shocked, I tell you, at the media's hunger for ratings over authenticity. Since when do I willingly subject myself to bad television? Who was that conspicuously smug woman?

As I've watched the greatest human migration crisis of our time unfold before our bulging eyes, with great hesitation, I began to consider a solution: that the United States and its allies march in and annihilate those raping, beheading ISIS assholes so that people can go back to their imperfect, hopeful and messy lives in their own homes, like the fortunate among of us. I, the peacenik, earnestly debated this notion with friends, who did not treat me as they might a lunatic. And then I came to my senses. Right! Send in the drones; while we're at it, kill the remaining half of Syrian citizens there, create a few more ISIS recruits, and sit by while Bashar al-Assad gets asylum in a cushy palace somewhere in Russia. America always gets it so right in the Middle East! I sure don't have the answer to this developing catastrophe, but I know that scenario won't bring the fix we seek. I fail to recognize the woman who walked around, however briefly, in bullet-scented skin, indulging in war-tainted deliberations.

At times, it is our friends who become unrecognizable. You will observe a kind, supportive and loyal person, whom you love fiercely metamorphose into a blanched shade of her former self. Or, the shade darkens to impenetrable black until only confusion and suspicion remain.

We all fluctuate as we live, at times evolving, at others regressing. The perilous act of self-examination can be daunting, exhilarating, frightening and complicated, usually all at once. As I age, I often wonder Who is that woman in the mirror! But when it gets to the point where you don't recognize your own shadow, it's time to tackle the deed head on.

Photo and video by Carine Fabius