A few years ago, shortly after moving to South Korea, I found myself in a very challenging relationship.

Communication problems. Arguments over petty things. On and off. Fight, then make-up.

The relationship was in a continuous state of struggle and conflict, where I, in the midst of these constant storms, was trying to find some kind of peace.

The relationship left me so broken and damaged that the only thing I really wanted to do at that point was to figure out what the f*** I was doing wrong in my relationships and find out some way to fix that.

And so, for several months I limited the amount of relationships I would really participate in. I basically just associated with my co-teachers at work, students, and some friends I already had. I really didn't want to start out any kind of new relationship out of fear that I would "mess it all up".

I was fed up with being hurt. I was tired of being let down over and over again. I now found myself in this place where I feared to let anybody in again because I was scared they were just going to let me down and leave again like so many others had.

Though I managed to benefit from taking a few months to focus mostly on myself, it's certainly not something I would recommend to everyone. Though it can certainly challenge us to really get to know ourselves, it can become very lonely and cause bits of depression.

In addition, the act of isolating ourselves -- especially when its out of fear of being hurt again -- isn't very healthy. When we isolate ourselves or stop "putting ourselves out there" due to fear, it only creates more fear. It only makes it harder for us to get ourselves "out there" when we finally decide to do it.

The simple motivation behind it is also flawed: To isolate ourselves because we fear being hurt. By accepting this idea and allowing ourselves to be controlled by fear, we cut ourselves off by reality. The reality is: That the people we attract to us are meant to give us the maximum opportunity for growth. 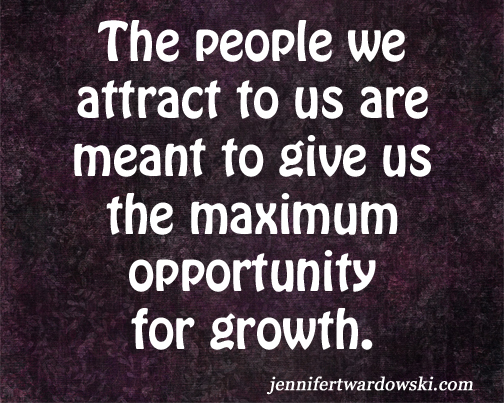 These people teach you what you need and don't need. They teach you who you want to be and who you don't want to be. They have influence you to become stronger and more confident in yourself. They teach you the importance of taking care of yourself and being true to you.

And, for that, it's worth taking the risk of being hurt. It's worth being vulnerable. It's worth getting "yourself out there." Because without it, we may never really grow. Our lives may never become as rich and fulfilling as they could be.

So if you're holding back, take the plunge. Take the risk -- and the growth you'll ultimately gain will be so much more than the pain you may have to endure to get it.

What have you learned through the pain in your past relationships? How has it allowed you to grow and become a stronger person? Share your thoughts in the comments below!

This blog was originally published on JenniferTwardowski.com.

Jennifer is a self and relationship coach and teacher. She helps women worldwide create fulfilling relationships with both themselves and others so they can live happy and joyful lives. Click here for her Free Self and Relationship Healing Meditation.