"My love life will never be satisfactory until someone runs through an airport to stop me from getting on a flight." -- Teenager Post #14029 featured here.

He drove us all home 18 hours over two days.

Three kids and hundreds of miles and potty breaks and princess pull-ups, the car covered in the markers I'd bought for window art. Turns out the soft beige ceiling of a mini van makes a perfect canvas. Rainbow swirls color the door panels and there are goldfish crackers crushed so deep into the seats that they will likely be there come next summer and this same road trip all the way to Northern Michigan and the lake that his family have been coming to for decades.

Three times he's held my hands, my shaking legs, my head, my heart as I've bared down and groaned a baby into being. He has run for ice chips and doctors and night shifts and laid himself low to help me hold on through the hard rock and roll and push and pull of labor and I've never drowned holding onto his hand.

There is a rumor, an urban myth, a fiction, a fantasy, a black-and-white screen cliché that love looks like the mad, romantic dash through airports for a last chance at a flailing kiss.

And then the credits roll.

And the lights come on.

And we must go back to our real lives where we forget that love really lives. 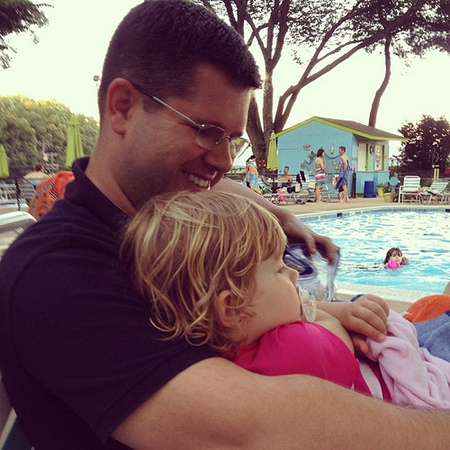 I threw up so hard and fast and often one night in a farmhouse in Pennsylvania that I couldn't stand come morning. He moved over and out and gave me the bed. He went out for crackers and soda and mind numbing games to keep the three kids occupied and away from mom.

I looked in the mirror and there was nothing romantic looking back at me, but around the wrinkles in my eyes, the parched, white cheeks, there was the deep romance of being loved beyond how I looked.

He's gone out for milk at 10 p.m., he's held our children through bouts of stomach viruses and told me there is nothing about his kids that disgusts him. He's carried us on his shoulders when we were too tired or too sad or too done to keep doing the every day ins and outs that make up a life.

He's unloaded a hundred loads of laundry and put the dishes away.

He lays down his life and it looks like so many ordinary moments stitched together into the testimony of a good man who comes home to his family in the old minivan, the one with the broken air conditioning.

It undoes me every time to look around and find him there, having my back in the day to day and the late night into late night and then next year again.

He's run a thousand times around the sun with me and we hold hands and touch feet at night between the covers even when we're wretched and fighting we're always fighting our way back to each other.

He runs on snatched sleep and kids tucked into his shoulder on both sides of the bed.

He is patient and kind.

And we come running to him. When the battered white minivan pulls into the driveway his children trip over themselves, their abandoned Crocs and the pool bag to be the first to open the door and spill out their day into the hands of the man who can catch them. 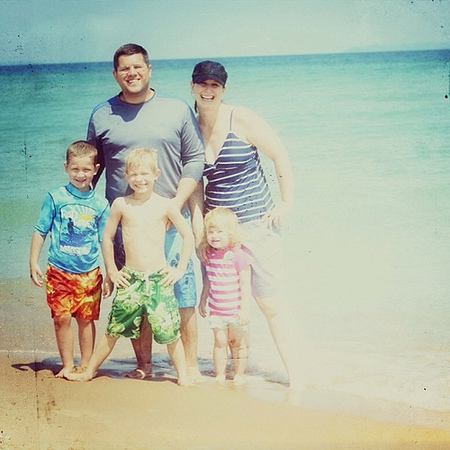 This ordinary unremarkable love walks slowly every day alongside. One step, one day, one T-ball practice at a time.

One permission slip signed, one Lunchable, one school play, one art project, one Lego box, one more night time cup of water delivered at a time.

This ordinary love that wakes up with bad breath and crease marks on its cheeks and is the daily bread that sustains across time zones and countries and cultures and the exhaustion of trying to figure out how to be a parent and a grown up and somebody's forever.

And this is a love life -- to live life each small, sometimes unbearably tedious moment -- together.

To trip over old jokes and misunderstandings. To catch our runaway tongues and tempers and gift them into the hands of the person who was gifted to us.

He lets me warm my ice cold feet between his legs and the covers at night.

He has never run through an airport for me.

This is love with the lights on and eyes wide open. This is the brave love, the scared love, the sacred boring, the holy ordinary over sinks of dirty dishes and that one cupboard in the kitchen with the broken hinge.

Author of Surprised by Motherhood and blogger at LisaJoBaker.com