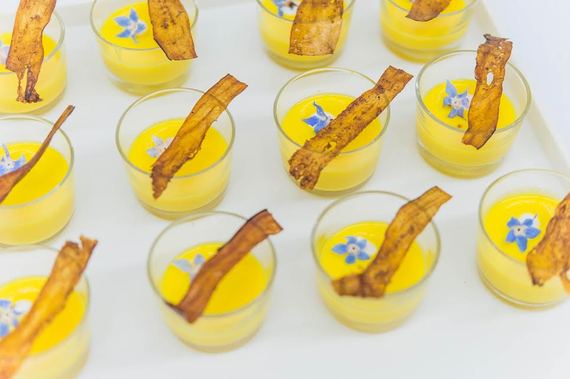 Two of the best dinners I've had recently were not in restaurants. One took place at an art gallery in New York's trendy Chelsea area; the other in a lovely apartment in Bronxville, New York.

The first, for forty-two people seated around one long table, was served and eaten in total silence. Created by chef and caterer Jay Astafa on behalf of the New York Zen Center for Contemplative Care, it was a ten-course study in mindfulness. The second dinner, no less thought-provoking, featured six-courses with spot-on wine pairings, orchestrated by CIA student George Musho. Both menus were prepared with poetic sophistication that belied the ages of their chefs. Jay is 23 and George is 20, and both started cooking in their early teens.

Although I was first chef to New York Mayor Ed Koch at 24 and performing my own culinary handstands, my repertoire did not rise to the ambitions of these young men. I say men because they are; it is not dialectic about gender in the kitchen. Toques off to them -- for their stealth execution (both cooked their meals in slivers of kitchen space) but, more importantly, for their sure-handedness in menu progression and the harmony of flavors and textural contrasts.

They've absorbed what's essential in the gastronomic zeitgeist without being seduced by mish-mash grandstanding, and both dinners exhibited surprising levels of maturity. Jay's career was launched when, at age 16, he added vegan dishes to his father's otherwise traditional pizzeria on Long Island, a trajectory that has passed through the Natural Gourmet Institute and ICE (Institute of Culinary Education), culminating in his own catering company. George, still a CIA student, has interned at four-star Del Posto, at Oceana (with chef Ben Pollinger), and ran a tempestuous summer kitchen at Oakland's Restaurant and Marina in Hampton Bays, New York, where he worked sauté by himself doing 1000 covers a day.

Jay's vegan menu was an excursion into varying intensities of umami -- with the room's silence allowing us to focus on the innate qualities of each ingredient before considering them as a complete dish. It included a purple cabbage kimchi dumpling with soy-ginger sauce and edible porcini-pumpernickel "dirt"; an astonishing "tuna" tartare fashioned entirely from watermelon with a "yolk" magically made of mango; congee with ramps, english peas, asparagus and morel tempura; black sesame soba in black garlic dashi with grilled king oyster mushroom, and green tea matcha cheesecake with white chocolate gelato. Each course came in a curated selection of elegant bowls, adding to the overall aesthetic.

(I often make a point of "cooking in silence," a ritual that allows the food on hand to talk to me -- water announces when it is boiling, the fish tells me when it is ready to turn. This effect of concentrating on nuances over everyday consciousness is equally as Zen as dining in silence.) 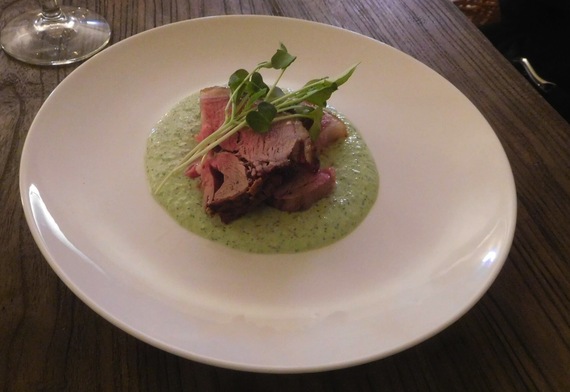 George's menu was conceptually as expansive, built around the mating dance of wine and food. It began with ahi tuna, guacamole and daikon sprouts on homemade tortilla chips (with Cremant d'Alsace). Then onto cultured butter-poached shrimp in a thyme-infused artichoke-caper broth; now we all know how artichokes and capers can wreak havoc with wine, but not the Greco di Tufo that George chose. Perfectly cooked spaghetti with anchovy, white wine and Parmigiano-Reggiano waltzed with a surprisingly aggressive Sancerre. It was followed by roast saddle of locally pastured lamb with tzatziki and Chateau La Mission Haut Brion 1981, our contribution to the evening; and then a warm salad of heirloom tomato, faro and arugula to finish the wine which, after 35 years, was remarkably robust. A bracing lemon bar with blueberry compote came with Jorge Ordonez No. 2 Victoria, a Spanish muscat from Malaga also served to Queen Elizabeth II to celebrate her 88th birthday.

When George was invited to spend a day at 11 Madison (his dream is to work there), he anticipated being asked to make an omelet - an old-school test of a chef's mettle. For practice, he bought 30 flats of eggs (30 eggs per flat, you do the math) and cooked hundreds of three-egg omelets in a stainless steel pan until he could make ten perfect ones consecutively. Jay, winner of Vegan Iron Chef in San Francisco in March, 2014, has appeared on the Food Network's Rewrapped, styled food for television and movies, and now runs Long Island's only vegan restaurant. This summer he has created a bounty of impressive vegan dishes for the trendy Surf Lodge in Montauk.

In food-crazy America, being a chef is a great pop-culture seduction. Sometimes we wonder (as international restaurant consultants) if such hype will lead to satisfactory lives for so many smitten with the industry. As cooking has become a ludicrously competitive sport, and when food shows extol all things bizarre, I'm comforted by the purposeful level of proportion, technique and esthetic sensibility of these two young men. There's hope yet.