One of the true ironies of parenting is that if you've done your job right, your kids will leave you. At 18, or 21, or 26, they'll realize that they don't want to live under your roof anymore, and they'll pack up and go. Sometimes, your angry words will trail after them... "You could have stayed if you had just followed the rules!" Sometimes, you'll drop them off in a strange dorm room, surrounded by strange people with wide eyes and trepidation. And sometimes you'll just say goodbye because you know it's time, even though every part of you wants to grab them and hold on and keep them by your side.

I've said goodbye to my son in all of these ways: with anger, with anxiousness, and now, just this week, I'm saying goodbye with a bittersweet acceptance that he's 22 and ready to begin life on his own, a thousand miles away from me. It's different this time. It's permanent, and we all -- my husband, myself, my daughter, and my son -- know it. When he accepted the job that will take him away from us, it was different from all of his other departures. Before, I knew he'd be back. There were college breaks and summers. There was the job that took him just a half hour away. But this time, everything is different. He's leaving, and I don't think he's coming back.

I would love to tell you that I'm handling it beautifully, that I stoically smiled through the job announcement and immediately began collecting boxes and newspapers for packing. That I got excited for his new adventure and couldn't wait for it to begin. That I was selflessly happy for him. When you're the author of a parenting book (my kids' favorite reminder: "Mom, you literally wrote the book on parenting") you try to have higher expectations for yourself. Which is why I consider myself to be an abysmal failure when it comes to handling my kid's departure with dignity.

Five minutes after he got the job offer and announced it to our family, I started crying. Mind you, I'm not a crier. I'm a smiler, an optimist, a gung-ho supporter. I managed to make it through two kids leaving the nest without missing a beat. So this time, everyone in the family was speechless as tears rolled down my face, my nose reddened and filled, and my eyes swelled. "I'm so proud of you," I told my son through stuffy nose and wobbly voice. "I'm happy for you, but I'm incredibly sad for myself."

He nodded his head. "I love you too, Mom," he said softly.

Since that moment three weeks ago, he's shown up at the house each weekend to spend time with the family he needed distance from just a year ago when he took an apartment. We shoot pool, we sit in the hot tub or around the fire pit and reminisce, we fall asleep watching bad movies. We're holding on to every moment. All I can think to myself is, We're finally at the point where we can be friends. I really, really like you, and you're leaving. The injustice of it all kills me. All those years of teenage angst and rebellion, and now that my hard work has paid off, my reward is moving to another city.

It hasn't escaped me that my son will likely meet his wife in that new city. I won't know her. I'll hear about her, see pictures of her, and spend the occasional visit with her, but I won't get to know her slowly and thoroughly, over shared time and varied circumstances. I see little ones and wonder if my grandbabies will live five states away. When I irrationally share this with my son, he reminds me that he's only 22 and not remotely ready for all that. But I know better. I was 22 once. I know how quickly you can fall in love at that age, how your life can change overnight and all your plans can fly out the window. My son is moving his adult life to another state, and that's where he'll make adult decisions that will change that life. I can't imagine watching a child leave for a permanent destination halfway around the world. And I can barely wrap my brain around the thought of sending a child off to war. This is child's play to those parents, but it's momentous to me.

So what will I do next week when I say goodbye? And why am I writing this now rather than after the fact, when I can tell you how it all played out? Because I want to hold the goodbye moment only in my heart, privately, where I can play it over and over to an audience of one. I want to hug him without analyzing it. I want to feel the emotions without putting words to them. He deserves that. I need that. 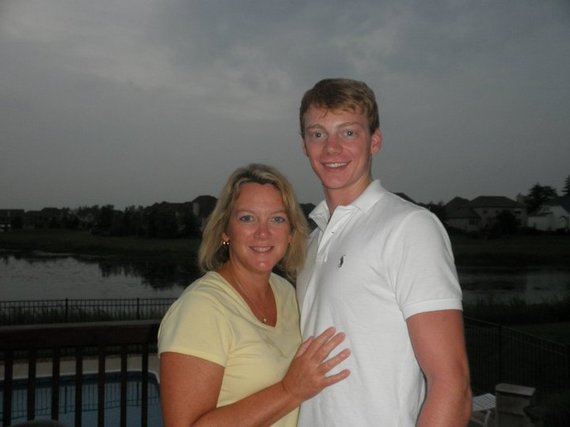 When Your Kid Leaves Home For Good
Celebrity Empty Nesters