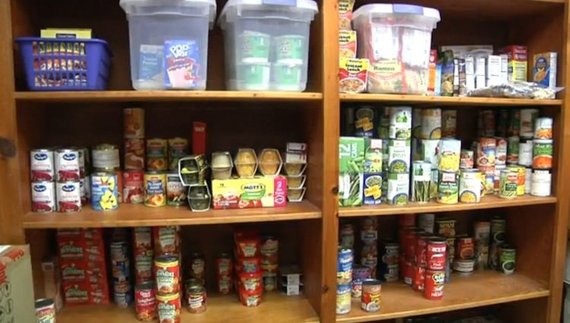 Despite financial and administrative hurdles, growing attention is paid to good nutrition for students of all ages, starting from kindergarten all the way to college. Never enough, but the approach is certainly changing. Many universities have launched initiatives to ensure good food in their cafeteria, such as Menus of Change: The Business of Healthy, Sustainable, Delicious Food Choices spearheaded by The Culinary Institute of America and Harvard T.H. Chan School of Public Health. Also the Dining Services of the university where I teach, The New School, are moving towards healthier and more sustainable offerings.
However, the attention to diet risks to hide food insecurity, a widespread but often invisible problem among many students, both graduate and undergraduate. While many programs are in place for elementary, middle, and high schools, college-age youth are often on their own. Especially in large cities, where the cost of living is high and education is increasingly expensive (not surprisingly, student debt has turned into a hot political issue), some students have to choose between paying their rent or buy groceries. However, something is moving also on that issue. For instance, thanks to the initiative of the Food & Housing Security Work group and Student Health and Support Services, my university has recently designated a space and appointed funds to open a pantry within the university, in collaboration with the Food Bank for New York City.
However, we realized that many students have no idea that some of their peers are food insecure. For this reason, we want to experiment on pedagogical approaches that break the barriers between what students learn in the classroom, their material life (in this case, food), and the community in which they live.
In this pilot project, which we are developing with the Food Bank for New York City, thanks to grants for our Provost's Innovation In Education Fund and from our Tishman Environment and Design Center, we will focus on the activity of the university food pantry to help students engage with food insecurity and the complex problems that surround it, from the social, economic, and political points of view (all aspects that are central to Food Studies). Students will be invited to work in The New School's food pantry with their peers and members from the Student Health and Support Services. At the same time, we will launch food demos and nutrition education focusing on how to eat healthily on a limited budget. Such demos will contribute to the development of a nutrition education curriculum targeted toward university-age populations, which our external partners could also integrate in their programming and outreach.
Furthermore, through lectures taught by experts from the Food Bank from New York City in the format of a short course, students will also reflect on food banks and their functioning. Topics will range from the political economy of food insecurity to its nutritional and health implication, its connection with community dynamics, as well as and its interaction with government regulatory processes. At the same time, the School of Design Strategies within Parsons, the school of design, is developing a course focusing on design issues, including system design, service, and climate change as impacted by the agricultural food system and distribution networks..
By filming the lectures, posting them online, and spreading them through social media, we hope to draw attention to this very serious and too often unacknowledged problem, hidden in plain sight in our classrooms, workplaces, and communities. The videos will later constitute the basis for a massive online open course, used to enrich future iterations of the initiative and to provide educational material that not only our external partners, but also any group or institutions interested in the issue could access.
We hope that by participating in a transformative educational experience grounded in the tenets of social justice, students will acquire greater awareness of the implications and pervasiveness of food insecurity.
Photo Credit: GoodNewsNetwork