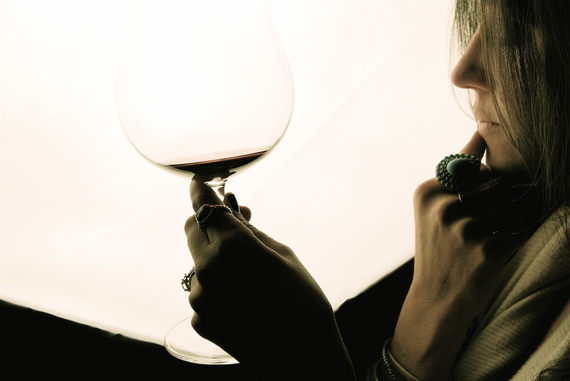 When I got sober, I didn't ask my then-husband to quit drinking. In the foggy, shame-filled logic of early sobriety, I felt guilty. After all, he had moved the booze from a locked cabinet (which I easily picked open with a kabob skewer) to some other super secret place in support of my recovery. Underground bunker? Mars? A few months in, though, he wondered if it would be okay to bring it all back home.

The cabinet was reassembled with the delicious clutter of scotch, gin, vodka, ouzo, tsipouro, brandy, kahlua, rum, tequila, and wine.

It was mostly fine, except when it wasn't. At night, over dinner, he would pour himself a glass or two or a third splash of wine, and sitting beside him on the couch, I could smell that dark promise, just like the little vial marked "Drink Me" in Alice in Wonderland, filled with "not-poison" liquid that smelled of cherry-tart, custard, pine-apple, roast turkey, toffee, and hot buttered toast. I scrambled to remember that what he was drinking would indeed kill me. Maybe not right there on the couch in front of the blazing fire and the big screen TV broadcasting The Walking Dead and its rotting, zombie bodies, but in a few drinks, a few days, a few bottles. Alcohol flips the suicide switch in my brain. I might be sitting on the couch eating an arugula and egg pizza, but after a bottle of cabernet, I want to cut my wrists with the crusts.

I believed that my recovery was my fault, my business, my responsibility. It was and is. But in a marriage or relationship, recovery is pursued together. I believed this even as we sat on the couch pretending that our marriage was also healing. Even as I fetched him a scotch glass at the end of the evening so he could pour himself a snoot or two. After all, he had the difficult job of living through and with me. It was the least I could do. Even as I gathered up the wine glass and scotch glass and hand washed them. I hated scotch, but in the last days of my drinking, took swigs straight from the bottle, swallowing fast and hard, trying to obliterate myself. Still, I reasoned, this was my just dysfunctional penance.

Some nights, fewer in the end of our marriage, we had sex, a sign that we were still bound to each other (though, he was already, by this time, bound to another woman). Since sex necessitates bodies against each other, mouth against mouth, breath against cheek, I had to hold my breath when he moved close. Not out of distaste for him, but for the booze. I couldn't taste his scotch and wine in my mouth, couldn't breathe in the potential for damage. Sex shifted from (fraught) pleasure to my fending off a longing for drink and drunkenness, and my turning away (staring at the wall, the dresser, the knobs on the dresser) to stay intact.

Alcohol always made sex easier for me; I was less barbed with the thorns of insecurity and disconnection. By extension, alcohol made it easier to forget what I'd done while drinking alcohol which would then, once again, make me do shameful things which I would need to again forget. The ouroborus. The snake eating its tail. At one of our very drunken Christmas parties (think guests throwing up in the bathroom or passed out on the couch), I batted my eyelashes at my husband (who thought maybe I's had enough to drink), and wooed him into sex on the back steps. Thrilling because we could be discovered, but it was my way to deflect his attention. He would be agog at my daring and I could continue with vodka cranberries. The next morning, hungover, I could only feel shame. That wasn't me, not really.

What was becoming clear, too, was that the "me" who had married my husband, who had spent years and years drinking at ports of call all over the world, and waking up hungover and ashamed in these places, was no longer able to sit on the couch and pretend that his drinking with me was okay. Alcohol muddies intentions. Did he want to have sex with me, or, like my plastered performance on the stairs, was his desire fueled by booze? Beer-wine-scotch goggles? Was he interested in authenticity and integrity with me, something I was trying to practice in recovery? (Apparently not, evidenced by his secret, several-years affair).

I don't know if a future partner will have to be a sober partner. Perhaps my now-ex-husband's drinking was troublesome because we had spent so many years ritually drinking together. We clinked glasses on balconies and in vineyards and on beaches in Italy, France, Greece, and Turkey. Many of our loveliest and most poisonous memories are strung together by booze and its accompanying love and anger and betrayal and regret. How do you come out from under that weight? How does one partner summon the hopeful promise (writ small: soft unwinding of a day) of Laphroig in a crystal Tiffany snifter while the other is trying not to guzzle the bottle (that same hope, writ large: this will finally make me okay).

Now that I live on my own, in a house without booze, I am less vigilant. Maybe I'll binge on mandarin oranges or handfuls of Lucky Charms, but there's nothing (barring a slip on a dog squeaky toy or impalement by Legos) that can kill me. When I need to blot myself out, I call friends and talk until empty. When I'm feeling insecure, or unhappy or unfunny or unlovable, I write my truth, hug my kids and dog, and expend all that prickly energy at CrossFit or on the track. And sober sex? With its clear intent and active choice, it is dangerous and thrilling because it is full of feeling.