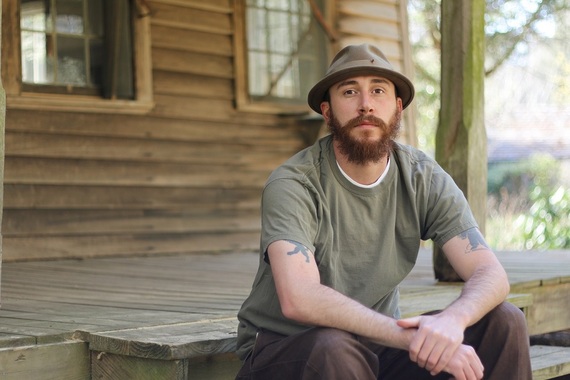 David Joy was born in Charlotte, and has lived in the Blue Ridge Mountains of North Carolina since he was 18 years old. At Western Carolina University, he received a BA in Literature and a MA in Writing, mentoring under Ron Rash, Deidre Elliott, and Pamela Duncan. His stories and nonfiction have appeared in various literary journals.

David's debut novel, Where All Light Tends to Go, is a propulsive, "Appalachian noir" story about 18 year-old Jacob McNeely's attempts to transcend a family legacy of crime and violence. His father is a meth kingpin in a small North Carolina town. His mother is an addict. A high school dropout, Jacob has worked in his father's illicit business for years. As the situation with his father spirals out of control, Jacob must decide whether he can escape his blood-soaked criminal circumstances by leaving with Maggie, the girl he loves; or staying with the violent, crime-ridden legacy he's inherited.

In today's publishing environment, how did you get an agent and how long did the process take?
I got an agent fairly quickly. I shopped the manuscript around and it generated a lot of interest. There was one agent I really had an eye on, but she passed on it. It was also with two other agents, and one of them is now my agent. I was very lucky to find representation so easily.

How have you been supporting yourself?
When I got out of college, I taught for a while. Then, for three years, I worked for a newspaper. When I was writing the book, I worked at a historical society during the day and at the front desk of a fitness center at night. Now, I'm writing full time.

First novels are often semi-autobiographical. How much of your life has seeped into Where All Light Tends to Go?
Some of Jacob's characteristics are similar to mine. For instance, his unwillingness to trust people or his sense that things won't turn out well are characteristics we share. His story however, is not mine. But, it is a story with which I'm familiar, having grown up around people who, very early on, were surrounded by drugs, and whose lives were pretty much determined from an early point. It wasn't on a level like Jacob's, but in Charlotte, North Carolina, there were a lot of kids I knew whose parents weren't around. They grew up on the streets where drugs and violence were everywhere. Drugs were the economic means of survival.

In reality, I grew up in a privileged household--not from a monetary standpoint--but in the sense my parents loved me, and would have done anything to ensure my success. That just wasn't the case for most of the people I knew. So Jacob's story, while having some roots in my own experiences, is really a product of my imagination.

Some people have compared your novel to the TV series, Breaking Bad and to the film, Winter's Bone. Are there any connections?
There are definitely connections to Daniel Woodrell and his novel, Winter's Bone. I was really taken with him for a long time, and just before I wrote this book, I'd read his novels, Tomato Red and The Death of Sweet Mister. Much of what I'm trying to do on the page reflects his work.

When I wrote Where All Light Tends to Go, I'd never seen Breaking Bad. After I heard the comparisons, I watched the series. It's brilliant. A bookseller told me he thought my novel was like Breaking Bad, but if that story had been told from Jesse Pinkman's perspective. I think if you liked that TV series, you'll like the novel.

Absolutely. Where All Light Tends to Go says a great deal about circumstances and fate. Will you talk about that?
I think it's true of the people I knew, and those with whom I still associate: for impoverished people, their circumstances weigh far more heavily than hope. Many are born into dire conditions, and their fates are set in stone. They don't have the mobility or options others do. That reality makes life very hard. There's not much room for hope in those environments.

Jacob McNeely is a complex character. How did you create his unique voice?
For a very long time, I lived with the image of Jacob. I kept trying to write his story, but I just couldn't get it right. At one point, I'd written 40,000 words; knew it was all wrong; threw the script away; and started over. Then, finally, it all became as clear as day.

Is it accurate to say Where All Light Tends to Go is a character-driven novel?
Definitely. The limitations some critics have pointed out are, in my opinion, the result of the novel being a first-person narrative. We never leave Jacob's mind. The great thing coming out of that is his voice; I don't think you can have that kind of voice in a third-person narrative. But, of course, it limits what you can do on the page. You can't be inside Maggie's mind or inside Jacob's father's head.

The language in the novel might be called "Appalachian lyrical." Surely, the novel is Southern, in the best sense. Who are your most important literary influences?
As an Appalachian writer, it would be Ron Rash. My major influences have been Larry Brown, Daniel Woodrell, Harry Crews and George Singleton. We have a very rich literary tradition in parts of the South.

What's a typical writing day like for you?
I have strange sleep habits. I get up and read in the mornings. I'll nap after lunch, I'll work until dinner and then take a nap. After that second nap, I'm energized. My best writing efforts seem to come in the hours between midnight and six in the morning. It may be a pattern established from when I was working at those two jobs. I got up at 6:30 in the morning; didn't get home until 10:30 at night; so, I had to write in those in-between hours.

What's coming next for David Joy?
I've got one novel finished; it's being edited right now. It'll come out next year. The title has yet to be decided. It's similar in location, and involves a criminal element. The novel is about three characters dealing with traumas from the past; the things we carry with us in this life; and how those things govern our decisions.

Congratulations on having written a savagely moving novel that will likely become an important addition to the great body of Southern literature.