Two weeks ago at the annual National Restaurant Association show I ducked into what would turn out to be one of the most popular talks of the weekend: Mobile Restaurants -- Restaurants Get Rolling: Chefs Take It to the Streets. 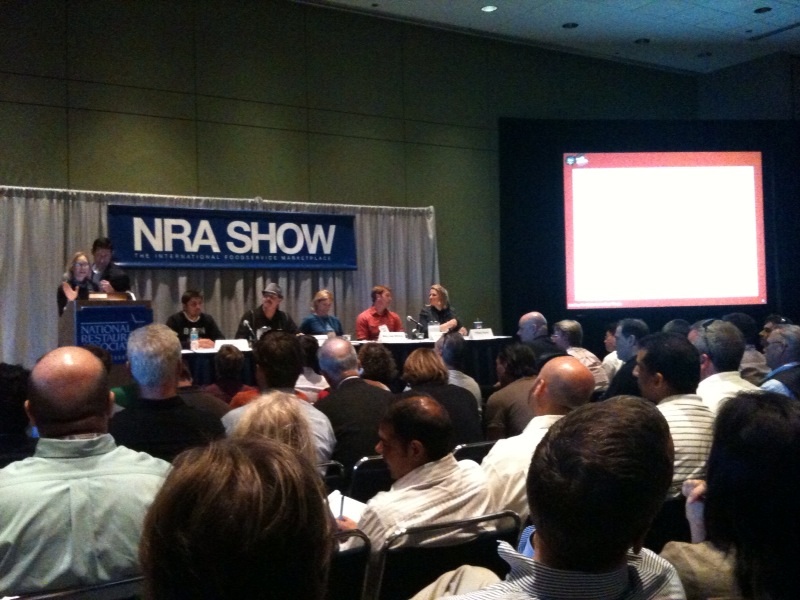 The room was packed with Chicago chefs and restaurateurs, all listening carefully as the panelists described their success running food trucks in America's biggest cities. On the stage sat Ludo Lefebrvre, of pop-up restaurant fame Ludo-Bites in Los Angeles, Mary Sue Milliken of Border Grill also in Los Angeles, and San Francisco's Aaron Noveshen, co-founder and director of culinary development for The Culinary Edge/Mobi Munch/Pacific Catch. Heading up the talk was Ray Villaman, founder of MobiMunch mobile food trucks, whose bright red floor model also happened to be one of the most visited attractions at the NRA this year.

Also on the panel was Tiffany Kurtz of Chicago's Flirty Cupcakes truck. Flirty Cupcakes can pretty much be considered Chicago's first gourmet food truck. Chicago's tough laws state that for a food truck to be in operation no cooking, cutting or food prep of any kind can take place on board, but Tiffany was able to skirt around that by baking and packaging her cupcakes off-site and transferring them fresh to the truck each day. With over two thousand followers on Twitter, Flirty Cupcakes sells out their supply almost daily.

Listening to Tiffany and the others talk about the mobile food revolution, it was easy to feel hopeful. In a city that can easily be considered one of the top food destinations in the country, it's embarrassing that we haven't yet embraced the food truck phenomena. Rick Bayless has said that he dreams of a food truck off of which he can serve surprise tacos, announcing later via Twitter what was in them. Lockwood chef Phillip Foss wants to start up a meatball truck and Bill Kim would love to do Korean rice cakes. Yes, yes and yes.

As of this week a proposal to change the strict laws is going before city council. The proposal was researched and written by Chef Matt Maroni, founder of Chicago Food Trucks, an organization aimed towards bringing the mobile food movement to life in Chicago. Maroni is also owner of Gaztro-Wagon, a 13-seat sandwich shop that opens this week in Edgewater. Serving "naan-wiches" with fillings like braised shortrib or chicken confit, Gaztro-Wagon is named after the mobile food truck that Maroni hopes to get rolling once the laws change. About the movement he says, "I took it on knowing that it may pick up steam or it may fizzle, but I know that as of now it is full of steam and Chicago is headed in the right direction."

There is no doubt that Chicagoans are ready for mobile food. Just look at the success of Flirty Cupcakes as an example. "The people of Chicago have been so receptive and supportive," says Tiffany Kurtz. "We get high fives, fist bumps and 'you go girl' everywhere we go and we love it. I have people finding my phone number and calling me to say they love the cupcakes and the idea."

She adds that the food truck movement is, "a trend that is not going away, because people like having access to things they might otherwise not have access to. It will be a new way of doing business. We are a big city that should be on the cusp of innovation that meets the needs of the folks of Chicago."

Cities like Los Angeles, New York, San Francisco and Austin have long embraced the mobile food truck phenomenon, and the more I learn about it the more it sounds like a win-win situation. Restaurants get to expose their product to a larger audience, chefs who can't afford to open a restaurant can do something like this instead, and in today's economy the trucks have become a way for customers to experience food that they might have been able to afford were they to visit the restaurant.

If there's a downside to Chicago embracing the food truck revolution, I have yet to see it.

What can you do to support the movement?