As the Nobel Prizes are being handed out this year for Physics, Chemistry and Physiology/Medicine, many people are asking the question, "Where are the Chinese Nobel Prize winners in science?" Before digging more into this question, it's worth stating that using Nobel Prizes in science to measure national science skills is akin to using Olympic gold medals to measure national athleticism -- it cites extreme individual/small group performance and ignores the general population's performance. More generally, winning a Nobel Prize in science reflects a combination of strategy, intelligence, luck, perseverance, training opportunity, research opportunity, funding availability, as well as politics, both academic and national. 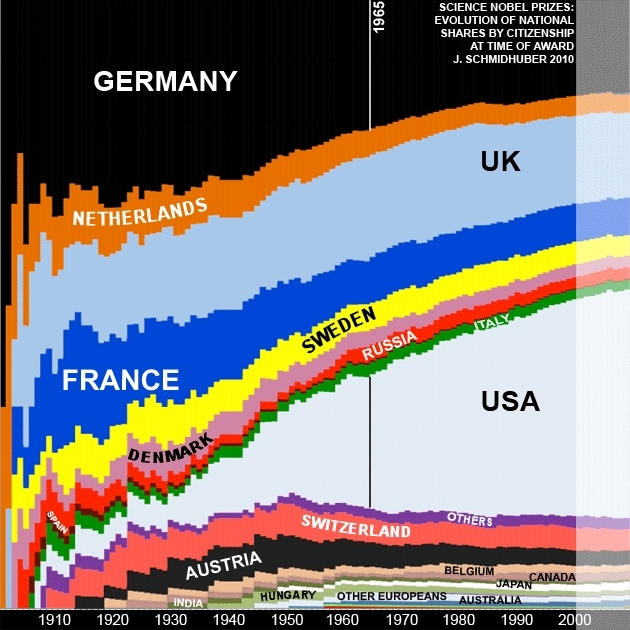 No one born in the mainland China has won the Chemistry or Physiology/Medicine until this year, and all four of the mainland China-born winners of the Physics prize (Charles K. Kao, Daniel C. Tsui, Chen Ning Yang and Tsung-Dao Lee) received their graduate training and did their prize-winning research outside of China (three in the US, one in the UK). The one Taiwan-born Chemistry Prize winner, Yuan Tseh Lee, did his graduate work in the US and has remained here for his prize-winning research. The US has historically benefited from top foreign talent being drawn to our strong academic programs, with many of these foreign-born scientists staying after they graduate. Continuous investment in our undergraduate schools, graduate schools and research institutions will help keep this pattern vibrant, though an increasing number of foreign-born scientists perceive that the career opportunities outside the US are starting to outshine those inside the US.

So when will we see a Nobel Prize winner in science who was trained in China and did their prize-winning research in China? Not for a long time. Although the Chinese government has been investing in its science technology as well as luring established scientists of Chinese descent back to the mainland, it will take years to build a strong infrastructure for cutting-edge research. Additionally, Chinese academia will need to modify their teaching styles to emphasize more creative problem solving, rather than the traditional approach that values wrought memorization. Delays will also be due to the typically decades-long lag between when research occurs and when an award is granted (though this year's Physics prize was an exception). This lag, which allows for validation of the scientific merit and importance, means that great scientific discoveries that occur now will most likely not be awarded until 10, 20 or even 40 years in the future. Lastly, the glaring political influences that have marred some of the recent Peace Prize awards and the early Eurocentricity of many of the awards will need to be avoided so that greatness is recognized fairly, regardless of national origin.

Nobel Prize Winners in Physics, Chemistry or Physiology/Medicine that Were Born in China