For the first time since I can remember I went to bed with a smile with on my face last night. Why? Because Congress knocked down the Public Option despite public opinion polls showing that 76 percent of people in this country not only want a public option - they'd be willing to pay for it.

I was hoping that today would be the type of day that makes my adrenaline rush and my head explode. One of those days that everything I read on the blogs and in the news is filled with crazed outrage. That maybe, just maybe, people would take to the streets the way those wimpy cheese eating French surrender monkeys and the rest of the socialist fascist Europeans do when they are denied crucial benefits like a federal holiday, jobs, and band-aids. The next thing you know rocks are being hurled through windows, cars are on fire, and they've taken a hostage.

All I've seen though, reading through the blogs, are more wimpy posts from people whose support for Obama ended in November with an "Obama '08" button and a blue t-shirt. As for continuing that support and the fight for why they showed up - forget it, right? He'll figure it out on his own. It's hard enough to whine about how unfair things are, how it's the same old same old, and that we never win. No sense in causing a scene. We wouldn't want to bother anyone. And certainly don't want to look ridiculous. 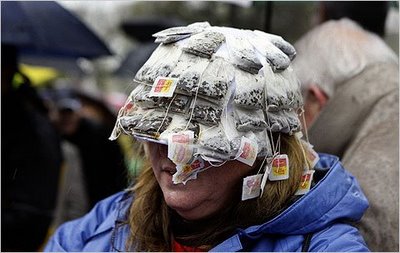 Meanwhile the right has throngs of screaming loons (most of whom would benefit most from health reform) mobilizing, protesting, tea-bagging, and screaming with full backing, support, and mobilization from the very groups who stand to lose it all if there were to be a public option. Max Baucus, who receives $2.3 million a year from health insurance companies, has a plan that's been called a gift to the industry by former health insurance executives.

I got an e-mail from a conservative friend (hey, I read Sun Tzu) a few weeks ago that said,

... sorry to say this but reading the stuff that is posted on your site and the welfare mentality that those on your site have. I have no use for it and really believe this country is gone beyond repair. Gone our (sic) the values of friends, family and self taking care of each other. Everyone now seems to think the government owes them something or should take care of them.

My friendship ended shortly after that e-mail. People like him see Democrats and liberals as sandle-wearing, tree-hugging, vegan freaks who lay down and expect to be taken care of but won't lift a finger to fight for what they want.

I've always been intrigued at the left's inability to fight. That when the right gets loud and mean, the left poo-poos them as if they'll just go away or as we saw yesterday, cowers in the face of adversity.

Jim DeMint, Eric Cantor, and John Boehner (he pronounces it "Bayner") have worked hard to bring us the Rovian town brawls with the "say it loud and say it enough it becomes true" tactics. But the real truth is out there and the left is silent, trusting naively that the truth speaks for itself. Boehner and his buddies know that if they block this bill it'll bankrupt Obama's political capital for the rest of the items on the agenda. It's not about health care or health reform or us. It's about winning.

When they say, "we don't want illegals to have health insurance," show them a sign with Section 246 of the bill in big bold letters that even they can understand:

H.R. 3200: Sec 246 NO FEDERAL PAYMENT FOR UNDOCUMENTED ALIENS Nothing in this subtitle shall allow Federal payments for affordability credits on behalf of individuals who are not lawfully present in the United States.

When they say, "Do you want to end up like France?" show them that France is #1 in the The World Health Organization's ranking of the world's health systems and hit them with a baguette.

When they puke back the lies they've been told to tell by people whose sole motivation is to run the country and run it into the ground, don't sit down and calmly inform them of the facts. Grab them by the back of head and shove their face in a book until they beg for mercy.

And when they say the World is 6,000 years old, throw a fossil at their head and walk away.