The question "where are you from?" is a difficult question to answer.

"Yes, of course, sir. If your daughter is Egyptian, then your granddaughter is also Egyptian."

The immigration officer greeting us at Cairo airport warmly assured my father that neither my daughter nor I needed a visa to enter our country of origin. He handed back the crinkled copy of my birth certificate - a document which, despite me having only lived in Egypt until I was three and a half, and despite the fact that I had not set foot on Egyptian soil in over 18 years, was all that was required to legitimise my, and apparently my daughter's, claim to Egyptian heritage.

My husband and I had decided to surprise my parents and accompany them on a trip to Egypt, my place of birth and my first nationality, in October 2014. Our first daughter was 7 months old at the time. It was a significant trip for me, not only because it had been so long since I'd been back, but more so because I found myself constantly asking the question:

Am I really Egyptian?

It started with the gentlemen at the hotel reception who were trying to rectify an error with our booking. And then the waitress at breakfast. The cashier at the supermarket. People that crossed my path who, before deciding to speak to me in English instead of Arabic, hesitated for a moment because they couldn't quite ascertain whether or not I was Egyptian. After all, I spoke to my German-born, Australian-raised husband, and our daughter, in English. I didn't naturally or confidently initiate a fluent conversation in Arabic. I hesitated, too. I didn't know which part of my identity I was supposed to tap into.

My family left Egypt when I was a toddler. I spent the rest of my childhood in Macau, and then my high school, university, and early adult-hood years in New Zealand. I went to an international school in Macau, and was taught English by predominantly American and Canadian teachers. We spoke Arabic at home, but as my siblings and I got older, English started to take over as our native language. By the time we moved to New Zealand, my pseudo-American-Canadian accent was relatively fixed and only occasionally will you now hear a faint Kiwi twang. I married my husband in Vanuatu. Since being married, we've lived in New Zealand, Singapore and now Indonesia.

While I was in Egypt, I realised then that in one sense, I didn't know who I was. I didn't know how to relate. I so strongly felt like this was my country, my culture, and these were my people, and yet, I felt like an outsider. As I stumbled through poorly-crafted sentences in my broken Arabic, I felt like a fraud. I looked at my baby and felt like I was depriving her of something to which she should have been entitled.

Since that trip, I've been trying to understand how my own daughters will process the question: where are you from? 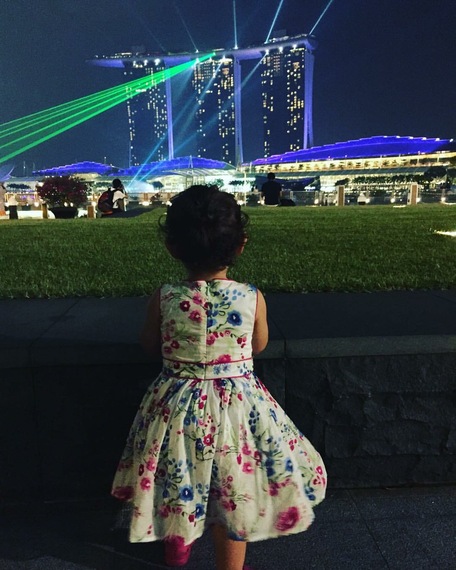 Sure, you could keep it simple and attribute that part of your identity to the nationality stated in your passport. Or perhaps where your parents are from. Where you lived the longest. As nice and neat those solutions seem, they don't always work. Certainly not in our case.
Both of my daughters have New Zealand passports. They're also entitled to Egyptian, German, and Canadian passports. The eldest has only been to two of these countries as an infant and the youngest has been to none of them. They don't speak Arabic or German because my husband's and my default language is English. They will, however, very likely be fluent in Bahasa since we're now living in Indonesia.

When I first started thinking about this, I wondered whether we were making a mistake by gallivanting around the world with them while they were so young. Were we depriving them of a sense of belonging? Were we creating a blurry, uncertain haze where there should be clarity and confidence about where they come from? Were we confusing them? Leading them down a path that would result in them feeling like they had no home and no community?

I thought about how my answer to the question "where are you from?" always contained some sort of a caveat. I could never give a tidy, clean-cut answer. Growing up in Macau, I would say I was Egyptian. That was when it was easiest, I suppose, since I was young, both of my parents were Egyptian, and we spoke Arabic at home. But then in Egypt, I would say that I was originally Egyptian but then feel the need to explain why my Arabic was limited and why I defaulted to English. In New Zealand, despite having been a citizen for the past 13 years, I would essentially have to explain my entire life story because I didn't look or sound like a Kiwi. There was always a need to justify and elaborate on my answer.

As distant as my memories of it were, Cairo felt like home. The sights, the sounds, the music, the food, the laughter, the simple, warm courtesies that punctuated every interaction I had - it felt like home.

When I visited Macau after being away for 8 years, and walked through the cobblestone roads sprawling through the San Malo markets and talked to shopkeepers in Cantonese or Mandarin, it felt like home.

When I was in Auckland, sipping on a flat white at a cafe along Mission Bay on a brisk Saturday morning and having a poignant conversation with the barista, it felt like home.

Now that I'm settling into my new life in Indonesia, the idea of walking down Singapore's famous Orchard Road, or riding a bike through East Coast Park, or feasting on kway teow and iced kopi at a hawker centre, feels like home. And in time, Indonesia will feel like home, too.

And so I've made my peace with the question I asked myself. No. We are not making a mistake. My fears of dooming our children to feeling displaced and unanchored have been replaced with the reassurance that, in fact, this is good for them. The "third culture kids" (TCKs) of this generation, many of whom were born to parents that were TCKs themselves, will change things. They will move mountains. They are the generation that is accustomed to experiencing the richness and beauty of diverse cultures, languages, and traditions as part of their everyday life. They are the generation of multilingualism, of bridging cultural gaps, of walking in another's shoes.

They will not see themselves as tied down to one place, one label, one box. Instead, in every city they discover, they will see a potential home, because my hope is that they will have learned, early on, how to learn to observe and appreciate the community around them, and to seek to relate to others by trying to find common ground. I hope that their experiences will teach them that you will always find some common ground, no matter how different you think you might be to another person. I hope they learn that there will always be some element of sameness and universality in all human experience. I hope they see what traditionally have been reasons to divide, to fear, to hate, as motivations to learn, to understand, to unite.

The generation for whom the more appropriate question is:

"Where aren't you from?"

*This article first appeared on Sassy Mama Singapore on 19 May 2016.

Mother of two little girls who hasn't slept since 2014.