I thought that when I grew up I would vote Republican. I had an idea that when I got older, I would have "valuable stuff" to protect from taxation and I would support those people who would let me keep my valuable stuff. I became eligible to vote in the Reagan/Bush years and as my Democratic candidates were steadily defeated, I consoled myself with the thought that one day, I too would vote Republican, worry about my tax rate and yell things like, "Hey kids! Get off my lawn!" while I drank martinis and listened to Sinatra.

Enter 2016. I am almost 50. I finally have some stuff to protect. I like Sinatra and a good martini. And I am much more interested in taxes than I used to be. To be 100 percent transparent, I actually believe that paying taxes is a small enough sacrifice in order to live in a country that is comfortable and healthy for every American. So even though I haven't shifted ideologically as much as I expected I would, this still should be my time to at least THINK about voting Republican. But the reality is that I don't think the Republican Party is committed to my taxes anymore, and worse, they don't seem to be committed to women in general.

There was an article in the Washington Post that suggested the Republican Party in the House and Senate has polarized more quickly and more decisively than the Democratic Party, contributing to a widening gap in the moderate center. Some people theorize that this hole is partly what has given Donald Trump a firm base. I wondered if this shift was driven by an "official" Republican Party platform change, or if it was more organic. So, I grabbed the Republican Platform Statement from 1984 and the Republican Platform Statement from 2012 and fed them each into their own, plain text Word documents to look at word usage as an indicator of a possible shift in focus.

Shift in Talking about Taxes

I started with the concept of "tax" to see if there was the same focus on taxation as I thought there used to be. Wasn't the Republican Party all about smaller Federal Government and less tax? I started by searching the string "tax" in both the 1984 and 2012 Republican Platform documents. I chose that word as it would pick up not only the word "tax," but also the words "taxation" and "taxes" and might deliver a true read of the concept.

At this point, my husband, who is often a voice of reason, noted that there had been (*ahem*) a few changes in our country over the past 30 years and perhaps this wasn't the "apples to apples" comparison I was looking for. So, I made a martini and pulled up the 1984 and 2012 Democratic Platforms. My thought was that if the issue itself was no longer as much of a focus because of a changing environment in the U.S., perhaps the Democratic platforms would show a similar shift. 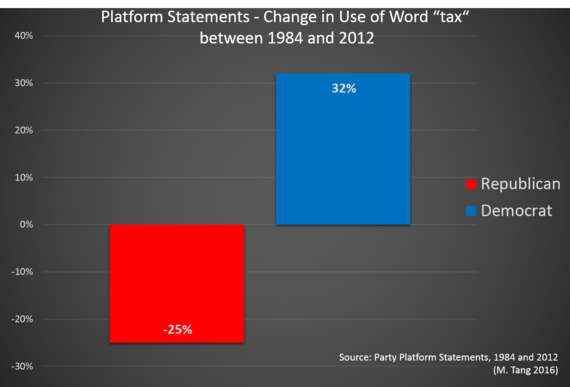 It could be that the change in the number of mentions on taxes between the two Republican Platforms reflects an audience that is no longer interested in concrete discussions about math-based things and are instead more interested in volatile and emotionally-charged discussions about non-math-based things. This article from The Nation states that the Republican Party made a specific decision in 1968 to change their platform in order to attract the Southern White voters. But regardless of the reason, the rough numbers seem to indicate that the Republican Party has less of a focus on taxes today than they did 30 years ago and that while the Democrats still talk about tax less often than the Republicans, it appears they are picking up their mentions. Super bad news for me and my itemized deductions.

Shift in Discussion of Women

As frequently happens when researching stuff, something else jumped out at me in the Platform comparisons. There was a disturbing change on how the Republican Party approached women.

I'm no fan of Ronald Reagan (I was one of the 12 people in 1984 who voted Mondale/Ferraro) but while I was actually reading the 1984 Republican Platform, I realized that, bless their hearts, they made a huge effort to draw in women and advocate for their advancement. Sure, there was a paragraph stating that the Republican Party opposed abortion, but there were also almost 1,400 words in the 1984 Republican Party Platform talking about mostly economic issues for women. This was, after all, the era of yuppie women in a short skirt and a long jacket.

Lately, I don't recall hearing a lot about what specifically the Republican Party wants to do in terms of women, so I decided to apply the same technique to the word "women" in the 1984 and 2012 Platform documents. I took out mentions of the phrases "men and women" and "women and men" to avoid counting mentions of our "men and women in the military" and the like. The upshot is that while Republicans might say that they are all about women, at least in 2012 women didn't get much press except in terms of eliminating abortion.

This represents an 83% decline in even throwing women a bone and mentioning a women's issue of any kind, even if it is a uterine-based issue. Compared to the roughly 1,400 words used in 1984 to talk about programs for women, in 2012, there were just 257 words devoted to women. Just over half of those words pertained to eliminating abortion and the remainder was mainly about women in the military. 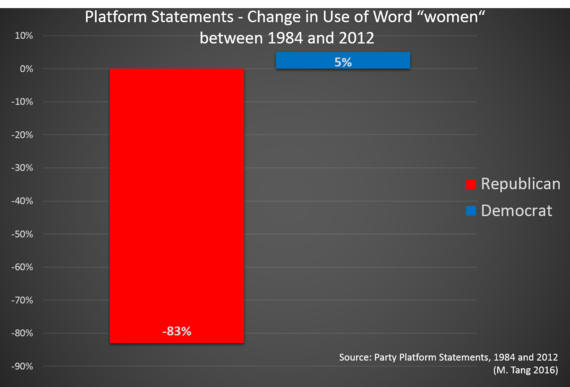 Again, the voice of reason in my head (which sounds a lot like my husband) urged that perhaps it was a universal change. There has definitely been progress made in women's roles between 1984 and 2012, and maybe it wasn't a Party-specific change. So I looked at the 1984 and 2012 Democratic Platforms to see if they also showed an overall decline in the use of the word "women". However, the Democratic Platforms showed a 5% increase in mentions of women -- 40 mentions in 1984 and 42 in 2012. In the interest of fairness, let's call it flat. Therefore, a decreasing focus on women's issues between 1984 and 2012 does not seem to be a universal trend.

But perhaps the thing that bothered me the most was the overall tone of the content about women. You can't easily quantify it with graphs, but in 1984, the Republican Party spoke with strong words in regard to women. They said things like "We are creating an environment in which individual talents and creativity can be tapped to the fullest, while assuring that women have equal opportunity, security, and real choices for the promising future."

OK, that sounds like a lot of "blah, blah, blah" rhetoric. But I still prefer it to 2012, where the tone is much more about protection, not enablement. For example, in 2012 the Republican Party Platform states "... we affirm our moral obligation to assist, rather than penalize, women challenged by an unplanned pregnancy." Doesn't this sound like women need some help to meet their challenges because they can't figure it out alone? And doesn't it seem like women are expected to just go with whatever approach the Party decides to adopt? But thank goodness women will not be penalized for unplanned pregnancies, at least in 2012!

All of this analysis will probably help delay the early onset of dementia and it helped clarify my nostalgic confusion about why I can't vote Republican. The conclusion that I walked away with was that as a woman, I would be cutting my own throat to vote for anyone running under the Republican Platform because they don't care as much about my financial well-being as they used to, and they care even less about supporting progress for women. So unless the 2016 Platform (which will probably come out in August or September) has some major changes, I guess I will just have to vote the Democratic ticket, suck up the tax bills and let the kids play on my lawn until someone can send me a more moderate option to endorse.