I was attending an event with students, teachers, and educational officials at a hotel in the city of Querétaro in México earlier this month, when I noticed something curious. The point of the event was to bring people from Querétaro and the state of Zacatecas together to engage in relaciones tutoras, personalized tutoring sessions where people teach each other material from the various subjects in school -- math, Spanish, history, and so on.

While the rest of the event's attendees were seated, bent over their work, one boy from Zacatecas in his third year of secondary school was bouncing from table to table. I sidled up next to him to find out why.

His name was Luis and he was being tutored by a boy at one table while he was simultaneously tutoring a girl at another table. I asked him why he was doing both at once, and he replied in Spanish (my translation): "Tutoring, without doing anything else, you lose a lot of time. So when she starts investigating her work on her own, I can advance along a problem that someone else is tutoring me in."

His response was pretty shocking. As a middle school teacher in East Harlem, I tried my hardest to initiate that kind of independence in my students. "Independent learning" was such a buzzword when I left New York: According to the theory, students should be able to use their peers, books, and the internet to investigate topics for themselves. Forget "frontal teaching" -- teachers gabbing behind a desk went the way of the "un-smart" blackboard years ago.

Starting out in the classroom, I knew intellectually that I was not the only one with valuable intelligence to share. I knew that my middle-schoolers would learn more from each other and from personal investigation than they would from me, and that I had to "set a culture from day one" -- as the catchphrase went -- that would express this attitude. I believed in that pedagogy. But budding teachers don't get a whole lot of practical training about how to translate that message into behaviors. In my first year, as many first-year teachers do, I gave everything to my students -- pencils, notebooks, hints that skirted the border with answers. By the time I realized I was fostering dependency, in some ways it was already too late to turn the ship around.

I left the classroom with a burning question: How do we develop independent learners?

I knew that in Mexico, an academic and a teacher, Dr. Gabriel Cámara had begun to bring to scale a program he had developed with colleagues in the backwoods of the Sierra in Chihuahua, the aforementioned relaciones tutoras, or tutoring relationships, a methodology which shows children how to learn on their own. In the schools that have adopted these tutoring relationships, someone with deep knowledge of a process tutors someone who wants to learn that process. A good tutor never gives out answers. He or she asks questions and provides examples so that the learner can create the knowledge for him or herself. Today, Cámara and others at a federal government program called the Integral Strategy to Improve Academic Achievement (or EIMLE, for its Spanish abbreviation) visit the lowest performing public schools around the country, show off the methodology and help it take root.

The hallmark of the program is in its principle that students learn in order to tutor each other (or their parents and teachers). The act of vesting a student with the responsibility for teaching someone else, I thought before I arrived, must push him or her to really master the material, to become an independent learner.

Once I got to Mexico, I found evidence to support this hypothesis -- but only part of the way.

In Querétaro, I listened as a female secondary school student from that state tutored a teacher for the first time in a bit of Spanish prose. The student spent about 15 minutes reading and talking with her teacher-tutee and then closed out the session. When I asked whether she was satisfied with her tutee's work, the young tutor said, "she understood perfectly what I was reading. I asked her what it was about, and she was able to answer." I asked the young tutor how she knew that she herself had mastered the material. She said that at first, she was confused, but then, her teacher explained what the poem meant, and she understood.

The student no doubt had the courage and motivation an independent learner needs -- she was tutoring a teacher, after all! But Querétaro has been working with the methodology for only a few months, so it makes sense that her tutoring session would be a bit superficial. She had not yet had enough experiences to notice what she and her tutee lacked and had yet to investigate. It became obvious to me that to make someone an independent learner, it wasn't enough to just give the student the responsibilities of a teacher.

Something more has to happen. Eduardo, from Zacatecas has studied dozens of topics in this way for the last couple of years. Eduardo spent three days tutoring his tutee from Querétaro in just one problem. I spotted him quizzing her on all of the terms she had learned. He explained how he subtly guides his tutees to their answers: "You have to tell him something, but without telling him."

So, aside from more experience and practice, what makes Eduardo more of an independent learner than the student from Querétaro?

The missing puzzle piece is the teacher. Experienced teachers are needed to catalyze and nourish these learning communities. They need to model habits like patience and curiosity. But teachers can only do so if they believe students can show off these qualities too. And where does that belief come from? It can't only be an intellectual understanding, as mine was when I began teaching. Teachers need to see and experience independent learning in action, firsthand.

I came to this realization when I met Carlos Valentín Córdova Serna. Córdova is an adviser from Zacatecas, and he works with Luis, Eduardo and their classmates and teachers. I watched him tutor a short story by Kafka to five teachers at once, in a rigorous session that had the tutees writing, reflecting, and researching. He talked to me about the first time he was tutored by a student. Córdova approached the situation thinking: How is a student going to teach me? I am the teacher. He explained how the middle-schooler presented the problem, which at first glance seemed easy, a matter of finding the area of a shaded region. But then, as Córdova took a closer look, he realized it was an irregular shape, and he froze.

He told me: "The student, with a lot of patience, sent me to some books to investigate. He had strong command of mathematical language. He really trusted me, he was really centered, his indications were sharp." Córdova's schema was changed, but only because he saw an independent learner at work, saw it with his own eyes.

He remarked: "I decided in that moment that I needed to learn from him so that I could teach my students better."

The teachers in Querétaro were in good hands.

Where Do Independent Learners Come From? In Mexico, Teachers Experience Them to Foster Them
Tutoring Relationships in Mexico 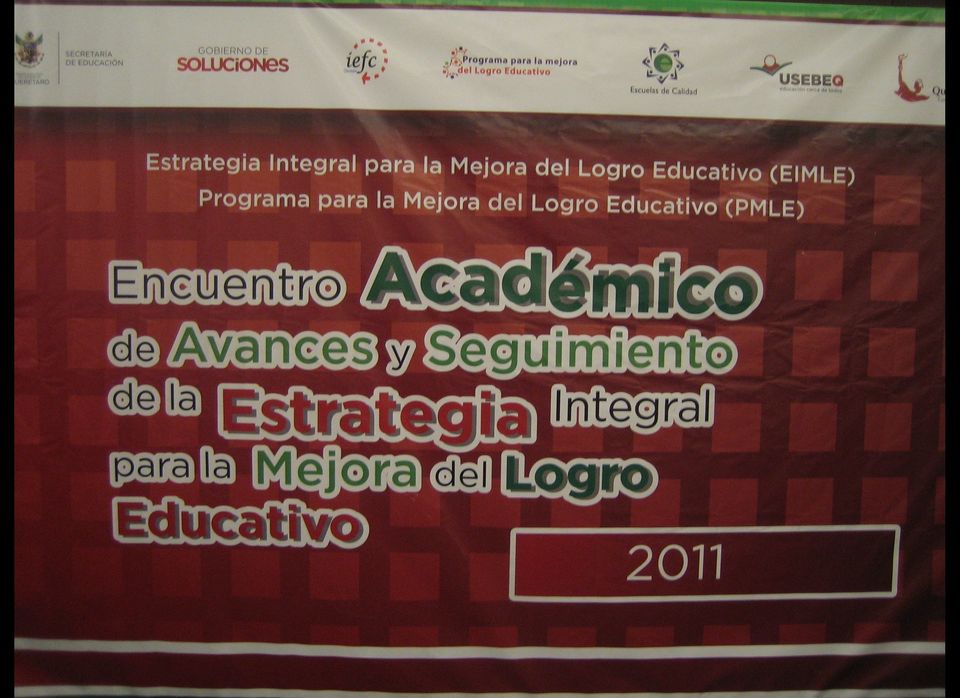 1 / 4
At an Academic Encounter in Querétaro
This month teachers, students, and educational officials from two states, Querétaro and Zacatecas, met up in Querétaro to tutor each other. The proponents of this new methodology hope it will reform schools across the country.