People always ask writers where they get their ideas, because the process seems like such a mystery. I think finding an idea has everything to do with being open to whatever the world is throwing at you. It's as if your brain is flypaper. Your job is to see what sticks. Writer Neil Gaiman has a great blog post on this concept, in which he says, "You get ideas from daydreaming. You get ideas from being bored. You get ideas all the time. The only difference between writers and other people is we notice when we're doing it." I love that. Over time, a writer comes to trust that process and to trust the ideas that come their way. As Alice Munro said in a Paris Review interview, "I never have a problem with finding material. I wait for it to turn up, and it always turns up."

In the case of my new idea, what stuck is a newspaper article about the violinist Joshua Bell. It came out in 2007, and I didn't read it until it won the Pulitzer Prize the next year, but the second I read it, I knew I would write about it. That article was instantly noisy in my brain. It took up room. It put down roots.

I have no idea why it should have done that. I'm not a musician. The truth is that I don't really like to listen to music. I find it distracting when I'm editing or writing. I find it slightly aggravating if I am just sitting there, listening to someone else play. I want to be the one playing, but since I don't play an instrument, I sit there stewing in my own discomfort and jealousy. But I have an enormous respect for the process of music - for how it's made. My sister Laura is a professor of music theory at Fairfield University and what she knows about music blows my mind. I like to listen to "Fresh Air" when Terry Gross interviews musicians, because I love to hear the way they think and work. The Joshua Bell article wasn't even about these things, though. It was about the perception of beauty. The Washington Post asked Bell to play anonymously in the subway to see what the reaction of everyday commuters would be. Bell played a famous piece of music on a famous violin and, for the most part, no one noticed. I thought it was fascinating.

I keep thinking about the movie Amadeus in relation to this article about Joshua Bell, and also the movie The Red Violin - which makes me think about 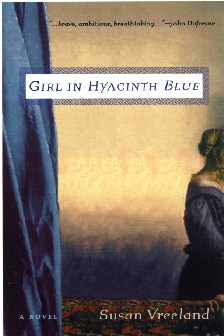 Girl in Hyacinth Blue, a book I really enjoyed. Both The Red Violin and Girl in Hyacinth Blue are stories in which things are passed down, by accident or theft or desperation or generosity, and there's something about that is very resonant to me. Amadeus was about genius and jealousy, two topics I have written about before. Maybe I'm not really writing about music? Maybe I'm writing about creativity, ambition, jealousy, people trying to hold onto things that can't, in the end, be theirs.

This is hardly a surprise. All my novels somehow end up being about the same thing. On the one hand, this is comforting. But on the other hand? Planning to write another book on the same theme as my last two or three or four makes me feel a little bit like it's all I know how to do. In any case, this idea became THE idea because of the noise it made. That's how writers get their ideas: they listen to what's making noise in their head.

Illustration of nasturtium seedlings from http://chestofbooks.com/gardening-horticulture/Commercial-Gardening-1/5-The-Stem-And-Its-Functions-The-Seedling-Stem.html