At a panel at the Los Angeles Times Festival of Books this year, I sat on while three distinguished authors discussed their work. After about 45 minutes of talk of craft and inspiration, the panel was opened up to questions from the audience. One by one the readers and writers (you are either or both if you hold a ticket to this panel) stood up from creaking UCLA lecture hall seats to inquire about character development or how to query an agent.

Toward the end, a twenty-something man popped up from his seat and, in a tone of pure desperation, asked the three fiction writers where they did their writing. He asked as if these published authors would reveal an enchanted garden or some other sacred location, the knowledge of which would change the course of his writing career from then. If only he could know where they write, he could go there as well and produce his magnum opus at last. At that moment, I sat at the edge of my seat as well, pen and Moleskine ready to capture the secret. And then Elizabeth Crane, author of the story collection, You Must Be This Happy to Enter, said that she writes at home, often on the couch with the T.V. on. "It's not very exciting to the onlooker," she said. She went on, however, to explain that it is exciting to her because she is creating her stories in these places. Crane's refreshing answer was at once slightly disappointing (what, no cabin in the woods?) and utterly encouraging because it taught this young writer a lesson in comparing my experience to others'. I can only write what I write from where I write it.

However, inquiring minds such as mine want to know more, so I have asked a few writers whom I admire to talk about where they write. Here are their responses. 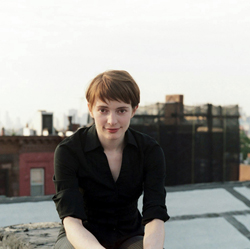 "I do most of my writing in my home office, at my unbelievably messy desk. It's by far my favorite place to write--my cats and my music are there, and it's a very peaceful room. I live in Brooklyn and work at a university in Manhattan, and I get off work in the mid-afternoon. Often if I have theatre tickets or some other plans that require me to be in Manhattan that evening, I'll linger at work for a few hours. When that happens, I go to the library at the university where I work and write there for a while. Often, very often, I'll find myself writing in the subway. I spend two hours a day on the F train, five days a week, and I always carry a notebook with me." (photo: Kevin Mandel) 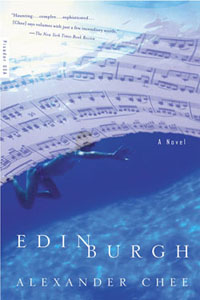 Alexander Chee, author of Edinburgh (Picador, 2002) and the forthcoming The Queen of the Night:

"Usually it's trains where I get the most writing done--I wish I could get a residency from Amtrak on a sleeper car, or an office booth in a cafe car. I recently had a residency at a colony in Florida, where I had two days of writing 17 pages a day, and it would have continued if I hadn't had to leave. I think anonymity and displacement help me no matter where I am--I need to feel like I've vanished and no one can find me." 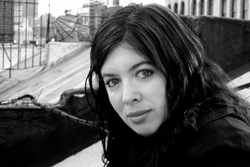 "I live in a tiny apartment in New York and can sometimes be found writing first thing in the mornings at a cafe, if I can find a good table, but I don't stay there for long. There are the crowds. The noise. I can't control the music on the stereo. The real place where I get most of my writing done is called the Writers Room. Billed as an urban writers' colony in New York City, it's a place for writers of all genres to go for space, quiet, and uninterrupted time to work. At various desks in the giant loft space of the Writers Room, I've written, no exaggeration, thousands of pages. When you pay for an 'office space' like this and have a dedicated place to go, one filled with other working writers typing up their own pages, it makes you all the more motivated to do your own work." (photo: Erik Ryerson)