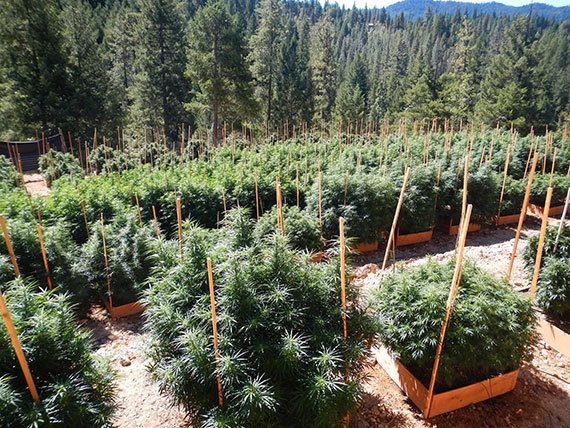 We have a lot of names for it, but where does it come from?

Not to be a buzz kill, but if you light up a joint or unwrap that edible, chances are your weed came from an illegal grow farm in Northern California where forests were cleared, rivers were sucked dry or tainted with chemicals and animals were poisoned.

California grows 60 to 70 percent of all the marijuana in the U.S., and the harvest leaves behind trash and lethal rodenticide that seeps directly into our water supply.

With legalization on the horizon, and demand for weed growing, we need to get a handle on this before the "green rush" leaves California high and dry.

Whether it's in one of our once-pristine national forests or on private lands throughout California, growers suck up around six gallons of water per plant, per day, according to estimates from the Humboldt Growers Association. With not enough funds to enforce laws protecting wild lands and watersheds, marijuana growers are illegally diverting water during the worst drought in California's recorded history. 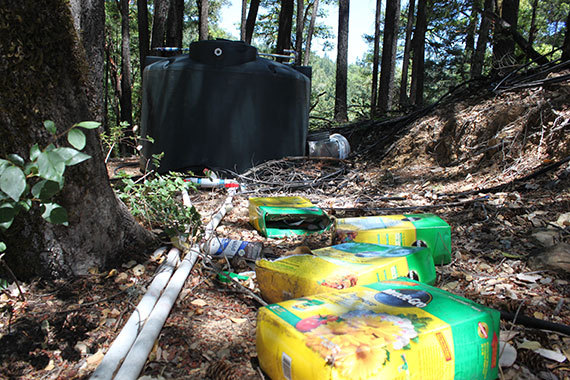 Take a hike
Illegal marijuana is dangerous, and I don't mean in that 1930s "Reefer Madness" way. It's dangerous because growers go to great lengths to protect their crops. Imagine going for a hike in a national forest and encountering people armed with military-grade weapons and booby traps. It's happening, and it's pretty scary. It's become risky for people to get outside in nature, for people to protect and preserve public lands, and for scientists trying to better understand what needs to be done to fix the environmental damage. A recent study in BioScience begins to quantify the impacts.

On that hike, you might find dead animals. Consider the Pacific fisher, a member of the weasel family that looks more like a bear cub, which dies when rodenticide liquefies its insides. Pot growers use pounds of this stuff, flavored like bacon or apples, and other poisons, which have killed animals as big as a black bear. Many creatures, including the endangered spotted owl, are dying from eating smaller animals as the rodenticide works its way through the food chain.

You might find clear-cut forests, pools of chemicals, toilet pits and mounds of trash -- anything it might take for a group of squatters to live for a few months. This is a big mess. There are an estimated 50,000 grow sites in California, and we're finding more all the time.

Consider your vices
Marijuana is thirsty -- it takes twice as much water as wine grapes. Agriculture use of water is heavily regulated. Winemakers often take water when it's plentiful and store it for use in dry months, while marijuana growers typically suck water straight from rivers and streams during the dry and hot California summers, precisely when nature needs it most. U.S. grown tobacco and crops used in beer and spirits also abide by these strict guidelines for water use, chemicals and growing practices.

Yet, in terms of dollars, marijuana is California's largest crop. Estimates show marijuana brings in about $16 billion a year, which is more than dairy, almonds and grapes combined.

Lighting up
Pot has been kept in the shadows for a long time, and the dangers associated with its cultivation have made it easier to look the other way than to deal with the environmental devastation that it leaves behind. It's time to shed light on the problem, and we need help. The California Department of Fish and Wildlife has seven scientists and wardens dedicated to tackling this problem, but needs closer to 70.

Legalization for recreation in California seems inevitable and could generate between $650 million and $1.5 billion in sales tax revenue. With legalization, are we going to crack down on this problem? Or will it get worse?

The legalization debate gives us an opportunity to prioritize how we spend that green. We should restore the damage already done by marijuana cultivation, regulate the industry to protect nature and enforce environmental laws already on the books.

We need to be as demanding about pot as we are about other crops and land use. California grows the majority of the nation's pot, and we can demand it be grown in sustainable ways. Imagine a day when the windows of pot clubs are lined with environmental superlatives. "Drought-tolerant blunt" anyone?

Learn more at conserveca.org/marijuana and follow Mike Sweeney at @mppsweeney