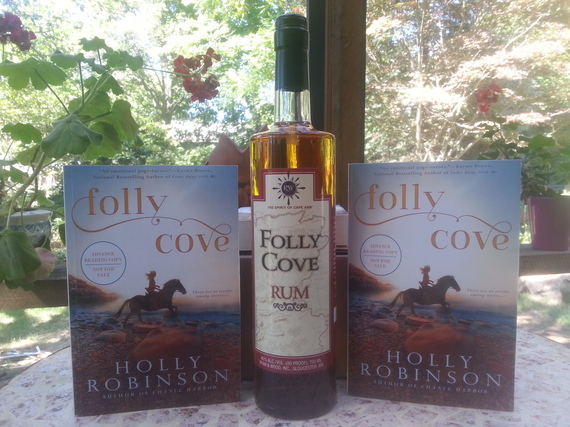 I came downstairs just as my husband returned from our local liquor store, where he'd gone to buy wine for dinner. He brandished a bottle of rum at me. "They made it specially for you, I guess," he said.

I looked, and blinked hard to make sure I wasn't reading the label wrong. Nope: "Folly Cove Rum," the label said. It was produced by Ryan and Wood Distilleries in Gloucester, a port city located on Cape Ann in Massachusetts. As it happens, my new novel, Folly Cove (due out October 4 by Berkley/Penguin Random House), is also set on Cape Ann, in an historic inn run by several generations of the same family.

Folly Cove wasn't the name I originally chose for the novel when I proposed it to my editor. The first title was Birch Point, but I decided the name wasn't lyrical enough and went fishing for a new one. I find inspiration for titles in all sorts of ways: Google, highway billboards, TV commercials, you name it. In this case, I thought of the name Folly Cove because I love the word "folly" and what it means--the primary definition is "a foolish act or behavior"--and each of the main characters in the novel had certainly been guilty of foolhardy mistakes. (Hey, you have to have a plot.)

Because the inn featured in my novel overlooks a cove in Rockport--a small historic town at the tip of Cape Ann, where the original settlers made a livelihood through timber, fishing, and hauling giant blocks of granite out of quarries--calling the novel Folly Cove seemed not only lyrical, but logical.

To my delight, Folly Cove turned out to be a real place--something I didn't know until after the novel was nearly complete, even though I live locally and have driven by it hundreds of times. That was my first happy coincidence.

A second happy coincidence was my discovery of the Folly Cove Designers during a visit to the Cape Ann Museum in Rockport after my novel was complete. Between 1938 and 1969, the Folly Cove Designers--nearly all women--created designs in their own homes that were then transferred onto linoleum blocks, carved out, and used to print on fabrics. The Folly Cove Designers sold their designs to some fairly illustrious retailers, including Lord & Taylor and Skinner Silks. I love the idea of these women working on their designs, then getting together to give each other feedback and inspiration, just as I do with my writer friends when we swap manuscripts.

My favorite aspect of this happy coincidence, though, is that the Folly Cove Designers were created and led by Virginia Lee Burton. Burton wrote and illustrated several children's books beloved by my family, including Mike Mulligan and His Steam Shovel and The Little House. I must have read those books more than five thousand times: one thousand times to each of our five children, plus on my own when I was growing up.

And now this: the happy discovery of Folly Cove Rum, created by Ryan and Wood Distilleries right here in Gloucester, by people who grew up near Folly Cove. What can I do, but drink a toast to creativity and happy coincidences, as I wait for my novel to launch this fall?