As I type this entry, there is just enough time before a big speech that I want my mind to be occupied with something productive: hence this blog post. I don't get nervous for my speeches, and I shouldn't as since the start of August, I've had nearly 70 audiences to address. Still, I need a little encouragement these last few minutes, and I am finding it by reflecting on a football team and a butterfly.

Last week, through a fortuitous set of circumstances, I had the magnificent chance to speak to the Purdue football team, struggling through a tough losing season. As I stood in front of that room full of sweaty athletes just finished with practice, what struck me the most was their resilience. From the head coach to the youngest freshman player, that group was faultlessly polite, respectful and determined. For me, it was thrilling to share my gift of motivational speaking with a group of athletes and coaches from one of my favorite sports. Still, I thought over their situation later that night and wondered if I would have the same resilience if I faced losses and criticism as much as they do. Honestly, I cannot say my attitude would be as positive as theirs. Actually, I bet I would have crumbled, probably even quit. But something keeps them there, working out and pouring themselves into their next game. That is resilience.

Then there is the butterfly, this one in the form of a lovely pin that 2012 Indiana Teacher of the Year Melanie Park gave me for Christmas. I wore it during the interview for National Teacher of the Year, and I wore it again on the gown I donned for the gala in Washington DC after I met President Obama. It is very special to me, and thus, I chose it for today as I'm somewhat worn and battered right now with such a hectic schedule that my mind, body, and spirit are struggling. I needed a dose of Melanie's joy and courage just now.

When she gave me this pin, Melanie read me the story of the butterfly effect, a philosophy that shows how interconnected everything is, how one small gesture can influence some outcome that is miles or years away. We must trust there can be a positive effect to the little things we do and say, even if we never see it. I love the story and the pin. Touching its elegant texture calms my spirit.

I think of the thousands, perhaps millions of words I have shared thus far during my nearly 70 speeches in less than three months, including to the Purdue football team. I pray that some of those words have been a substantial force of change for someone in my audience. I can picture those words spoken in the past and those that I will utter tonight floating forward on a gentle breeze, as soft as that made by the flutter of a butterfly's wing. May I be aware of the purpose and potential of my words, and may that awareness give me renewal when I myself forget my own purpose and potential. 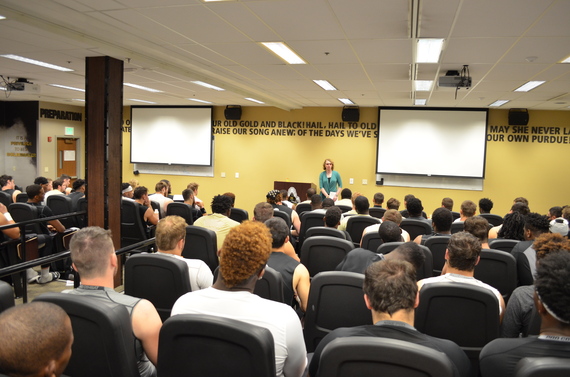 Photo of me speaking with the Purdue players and coaches.