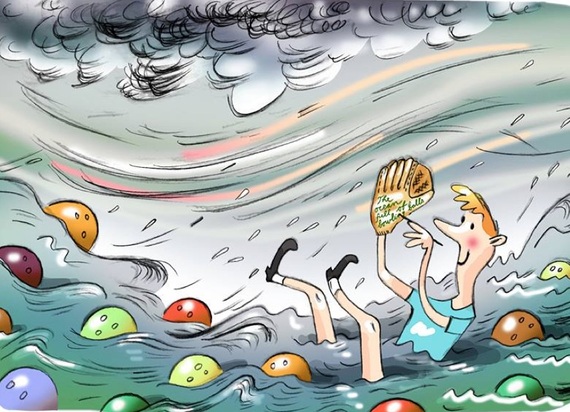 I have come to see a manuscript at the Princeton University Library. But asking to see this particular manuscript is like asking to see the Ark of the Covenant. I need to make a prior appointment, produce two photo IDs, register for a special library card and sign a sheaf of legal disclaimers. I will not handle, copy, reproduce, photograph -- and most especially will not quote directly. I am soon directed to wash my hands at a restroom I find down a labyrinth of corridors. Everything in my pockets and bag is placed under lock and key to make sure I do not furtively photograph anything with a mobile phone.

Finally I enter the cathedral-like reading room of Princeton's Rare Books and Manuscripts Collection. It is more hushed than most churches. Before me is a skinny woman who peers at me over the tops of her glasses. The story I seek to read is brought out and placed reverently in front of me. It is the most-requested manuscript Princeton University owns, receiving more visitor requests every year than Princeton's original manuscript of The Great Gatsby.

What is it? It is "The Ocean Full of Bowling Balls," a virtually unknown and unpublished short story by J.D. Salinger, the reclusive author of one of the definitive novels of the 20th century, The Catcher in the Rye.

Salinger wrote this story around 1945 as part of a writing course. His agent, Harold Ober, sent it to Story Magazine, where it was refused. Other magazines, including The New Yorker and Collier's, likewise gave it the brush-off. Frustrated, Salinger decided to go the other way. He decided that absolutely no one -- no one -- would ever read this story again. It has never been published legally, even online. And Salinger's literary trust makes sure it will not be. Pirated versions face lawsuits. Princeton owns the retyped manuscript only because the archives of Story Magazine ended up there.

None of this would be so startling it if did not involve the author of The Catcher in the Rye. It has sold more than 65 million copies and, for millions of boys 17-22, it has been s the quintessential coming-of-age novel for more than a half-century. Who could not relate to the confused 16-year-old Holden Caulfield? How he runs away from school, his obsession with his deceased brother Allie, and his dreams that he has to save the thousands of children playing in the rye, before they fall into the abyss. It does not say in so many words, but it's clear he catches them with Allie's baseball glove.

Salinger published no more novels after Catcher and gave only one interview before he died in 2010. So everything we know about the genesis of Catcher in the Rye owes to this single story.

"The Ocean Full of Bowling Balls" is a prequel, a forerunner of The Catcher written by Holden's older brother, the 19-year-old Vincent. He describes their youngest brother, 12-year-old Kenneth, re-named as "Allie" in Catcher. Vincent describes Allie so lovingly that it hurts. Kenneth is so curious that the tips of his shoes curl up, because he was always bending over to study things on the ground. He has two loves: literature and baseball. Kenneth is left-handed, and scrawls his favorite phrases from literature in green ink on the fingers and the palm of his baseball glove.
One day, when Kenneth decides to go swimming, Vincent is alarmed and afraid, because, as he says, the clouds and waves are like bowling balls. As he watches, they swallow the redheaded Kenneth. Vincent drives Allie's body back to the house, where Holden has returned from summer camp and is sitting on the front porch.
The story grabs me by the throat. On the table in front of me are two more unpublished stories by Salinger. But I've read enough for today.
"Will it ever be published?" I ask the curator of the manuscripts collection.
"No idea," he says. "The heirs are very secretive. They will make their own judgment. Anyway, not until 2060. Maybe never. "

As I walk out of the library, I think of a famous remark by Salinger: "There is a marvelous peace in not publishing."