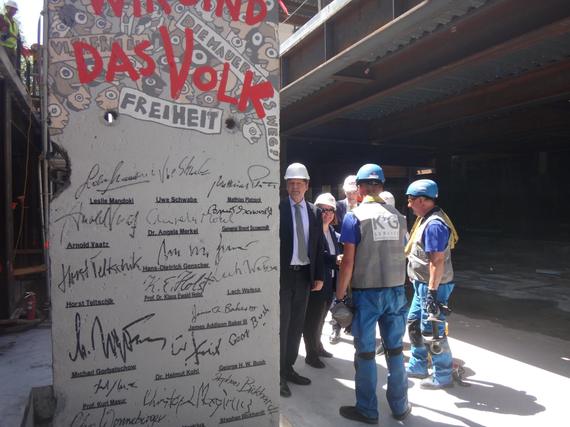 Thursday, August 13, a very special segment of the Berlin Wall was unveiled at the U.S. Diplomacy Center in Washington, D.C. (above), presently under construction.

It is one of approximately 54,000, 2.6 ton reinforced concrete slabs, each measuring over 10 feet high and four feet wide, that were used to construct the infamous Wall.

On the 25th anniversary of the night when "the Wall came down," I wrote:

The Wall did not physically come down during that long night 25 years ago. It would take several more weeks and months for the massive, reinforced concrete wall to be chipped, pickaxed and, eventually, bulldozed down. However, it soon became clear that, symbolically, the wall of oppression, fear and death had already fallen -- forevermore.

The entire 20-mile-long* wall that ran through the middle of Berlin came down by the end of 1990* -- a monstrosity, complete with anti-vehicle trenches, guard towers and mined "death strips" that resulted in the deaths of almost 200* people who were only seeking freedom. That Wall could not keep another 5,000 from escaping tyranny by climbing over or crawling under it through hand-dug tunnels. 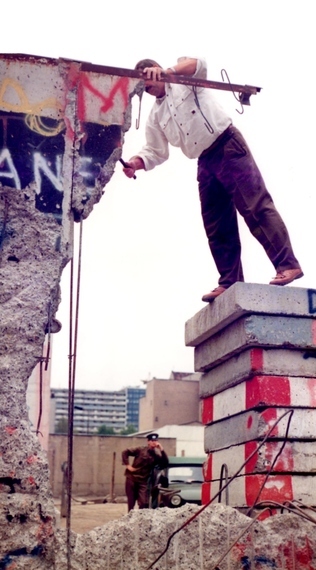 Unidentified man hacks away at the Wall while an indifferent East German guard looks on. (Photo by author)

But what happened to the massive 20-mile long wall?

Immediately after the Wall came down, at least symbolically, thousands of euphoric Berliners and tourists, like this author, flocked to the wall and, armed with hammers, chisels, even sledgehammers -- mostly rented from young entrepreneurs -- hacked at the wall and collected small chunks of concrete, reminders of the "Wall of Shame."

But, no matter how many of these Mauerspechte -- "wall (wood)peckers" -- "pecked" at the Wall, it would take much, much more to take down the massive relic of the Cold War. 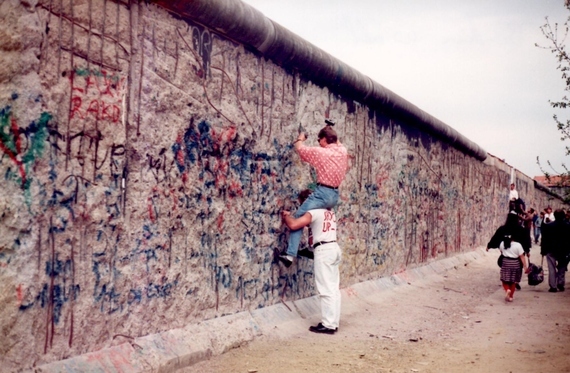 Enterprising "hackers" reach for "choice pieces" of the Berlin Wall. (Photo by author)

Serious demolition of the Wall -- using the military and heavy equipment -- started the summer of 1990 and most of the Wall was gone two years later. The majority of the slabs that were demolished were used for highway gravel.

One can still find short and longer segments of the Wall in and around Berlin that have been left intact or have been reconstructed for commemorative and historical purposes -- some segments have even been returned to Berlin from abroad.

The longest stretch -- almost a mile long -- can be found at the Eastside Gallery in Friedrichshain and other long segments can be seen at the Topography of Terror memorial and at a memorial on Bernauer Strasse.

In my article on the Wall, I admiringly wrote about the entrepreneurship of young West Berliners who not only rented the hardware to tourists to hack at the Wall, but also made sure that, overnight, the coveted graffiti mysteriously reappeared on parts of the wall where the original graffiti had already been hacked away.

And it is that entrepreneurship that accounts as well for the final destiny of other parts of the Wall.

According to Philip Oltermann at The Guardian, a man named Volker Pawlikowski "snapped up" 30 wall segments from a recycling yard while the German government was "still working out what to do with the wall."

Small pieces from those segments were selling last year for about $5 a piece at a souvenir shop at Berlin's Checkpoint Charlie Museum. According to Oltermann, "Museum shop manager Wieland Giebel insists that Pawlikowski's wall pieces are still genuine, though he makes no secret of the fact that they've been recently touched up with a spray can."

Interestingly, while a few segments of the Wall are still in Berlin, the vast majority of remnants of a wall built by a Communist regime to forcefully and cruelly keep its citizens in captivity are now scattered throughout the free world, prized as reminders both of the price of freedom and of the irrepressible human yearning for that freedom.

Estimates of how many Wall segments are in how many locations vary, but according to Oltermann:

Around 600 segments have found a new home outside Germany, making up over 140 memorials worldwide, in places as far flung as Australia and the Bahamas. There are five pieces of the Berlin Wall in Uijeongbu, South Korea, 30 kilometres from the North Korean border: a symbol of the hope that the two countries may one day be peacefully united.

In the U.S. alone there are more than 50 locations where parts of the Berlin Wall are displayed.

Among them, the John F. Kennedy, Ronald Reagan and George H. W. Bush Presidential Libraries; the National Infantry Museum, Fort Benning, Georgia; the Virginia War Museum, Newport News, Virginia; the gardens at the United Nations headquarters in New York; at the Hilton Anatole Hotel, Dallas, Texas (below) and in many towns and cities throughout the U.S. 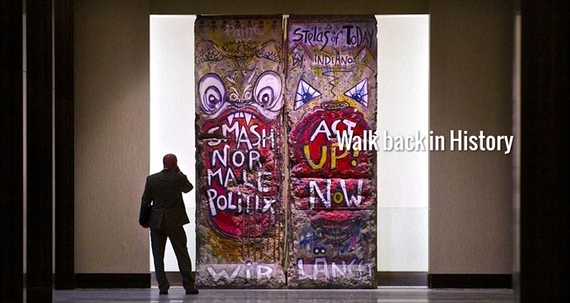 Ironically, even Russia, the Godmother of the abomination, is reported to have one segment of the Wall.

On the other hand, much more befittingly, a segment of the Wall has now found a home at the U.S. Diplomacy Center. 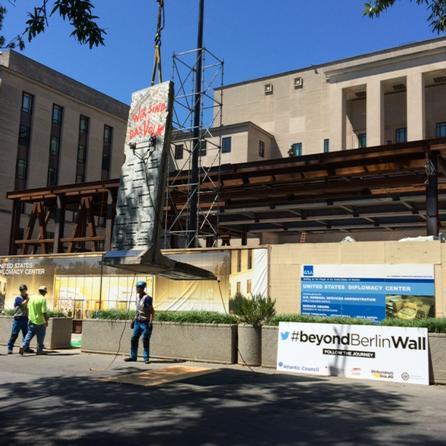 The Berlin Wall segment was hoisted over the State Department's historic flag pole before being lowered into the construction site of the U.S. Diplomacy Center. (Photo: U.S. State Department)

This unique segment of the Wall is personally signed by individuals who played key roles, including former U.S. President George H. W. Bush, former leader of the Soviet Union Mikhail Gorbachev, former German Chancellor Helmut Kohl, former Polish President and Solidarity leader Lech Walesa, current German Chancellor Angela Merkel, and former U.S. Secretary of State James A. Baker. The Wall serves as a permanent reminder of our shared history and the indispensable role of our transatlantic bond for the future.

My small chunks of Wall are not autographed by celebrities, they do not have the original graffiti, yet these pieces of almost indestructible concrete are a treasured and constant reminder of how fragile freedom is.

1. Reported lengths of the Wall vary depending upon several factors. Among these: location(s) of wall being discussed; time period of construction (the "fourth generation" wall dividing East and West Berlin was the most sophisticated and strongest section of the Wall); whether the eastern part of the double wall, the so-called "hinterland" wall, is included, etc.

2. Estimates of how many people perished attempting to escape over, under or through the Wall range from 136 to well above 200.

3. In 2014, Anna Kaminsky published, on behalf of The Federal Foundation for the Reappraisal of the SED Dictatorship, the book, "Where in the World Is the Berlin Wall?" The book tracks down more than 240 Wall sections throughout the world and highlights "some exciting and strange, but also few tragic stories behind these pieces of the Wall... the many ways in which the Berlin Wall has been used to commemorate itself and the Cold War."

1. The Guardian: "Where on Earth is the Berlin Wall?"

2. The DailyBeast.com: "What Happened to the Berlin Wall?"

Lead photo: Segment of the Berlin Wall that arrived at the U.S. Diplomacy Center on August 13, the 54th anniversary of the closure of the border from East to West Berlin.(Photo: U.S. State Department)