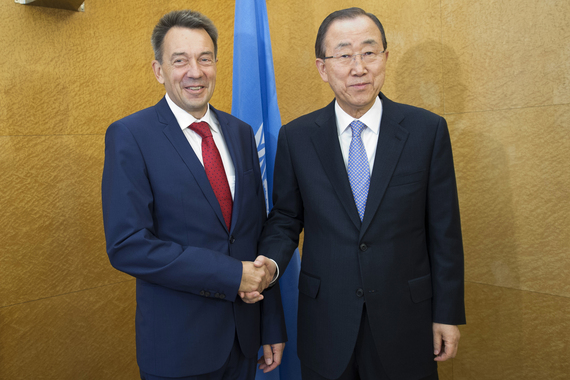 Families at a wedding party killed mid-celebration by airstrikes.

Patients at a hospital burned alive in beds set aflame by bombs.

Women and girls in war zones abused and sold as sexual slaves.

Monuments that stood for millennia as proud emblems of culture and civilization, reduced to rubble.

These are only the latest examples of a brazen and brutal erosion of respect for human rights and international humanitarian law in the world's conflict areas.

In the first seven months of this year, 95 per cent of the people killed or injured by explosive weapons in Yemeni towns and cities were civilians.

More than 90 per cent of civilians killed in today's conflicts are dying in densely populated urban areas.

In all wars, fighters and those who control them are responsible for protecting civilians, sparing them the effects of conflict and making sure they have access to food, water and medical services.

The presumption of respect for ordinary women, men and children caught up in conflict is the cornerstone of international humanitarian law, formalized after the world wars of the last century and underpinned by our shared humanity.

More than 190 governments have signed up to the laws, conventions and principles that protect civilian lives, from the Geneva Conventions to the Responsibility to Protect.
When Governments do not act to enforce these rules - or are themselves the perpetrators of violations - the resulting impunity breeds even more violence, generates vast disillusion and eats away at the foundations of international order.

The time has come for more determined efforts to save civilian lives and ensure adherence to international humanitarian law. Today in Geneva, I will join with Peter Maurer, the President of the International Committee of the Red Cross, to take a stand against the crimes and cruelty that define the current moment.

The international system has tools and mechanisms to push for greater compliance and accountability when national governments cannot or will not take action. It is time to use them.

All governments must publicly condemn violations, and work together to exert maximum pressure on those involved in the fighting.

Parties to conflict should stop using heavy explosive weapons in urban and residential areas, where most civilians are killed and injured.

Domestic and international investigations have an important role to play, and we make greater use of the International Criminal Court and special tribunals such as those that were established to pursue justice for abuses in Rwanda, the former Yugoslavia, Cambodia and Sierra Leone

And we must publicly identify and hold accountable all those who give support to governments, armed groups and terrorist organizations that commit crimes. In Iraq, Syria, Ukraine, Yemen, South Sudan and elsewhere, states outside the conflict zone are providing political, material and financial support to military forces and armed groups that are inflicting harm on civilians, who are paying the price for regional rivalries and proxy battles.

Protecting civilians in wartime is a cornerstone of the international system and the United Nations. Indifference will only make our world far less secure. Our continued failure to act is a disgrace and a stain on the conscience of the world. Even war has rules; it is time to enforce them.