Stocks and bonds are rallying at the moment, as there is very little inflation, allaying investor fears that it might rise, according to the latest inflation measures. This is good news for investors (money is cheap), but not household incomes and jobs, as there isn't enough inflation to boost economic growth. Boosting inflation seems to be the central challenge for both US and Europe, in particular, as they attempt to recover from the Great Recessions -- two for Europe, and still counting as EU's collective GDP is turning negative for a third time.

Though prices are no longer falling, they are not yet rising overall, either. And the reason is clear. Household incomes aren't yet rising above the current low inflation level of 1.9 percent, which means they are barely keeping up with rising food, housing and services prices. If the CPI consumer price index seems suspect, then we can look at the various other indexes, including the Personal Consumption Expenses (PCE) deflator followed by the Fed. 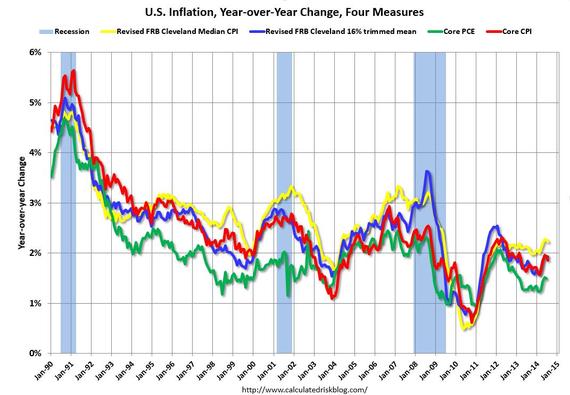 One can see from the graph that inflation has struggled to even reach 2 percent, the Fed's stated goal. Whereas during the 1990s, the longest growth cycle in our history, it remained closer to 3 percent. So we know that low inflation is a sign of slow growth, just as in Europe.

Yet policy makers do know how to boost inflation -- raise household incomes by supporting policies that create more jobs, of course. Yet Republicans and conservative Demos resist any kind to government expenditures that would create jobs -- such as public infrastructure maintenance and repairs, boosting education spending, and the like.

This is when government expenditures are still at a post-recession low as a percentage of GDP, while some $10.8 trillion in cash and cash equivalents sit in financial institutions driving up stock and bond prices, according to Marketwatch's Rex Nutting. "Data from the little-noticed financial accounts report show the American people have $10.8 trillion parked in cash, bank accounts and money-market funds that pay little or no interest," says Nutting, most of it at the top of the wealth ladder.

Private businesses should benefit from this cash hoard, but aren't investing sufficiently in new plants and equipment domestically. They are investing overseas, of course, where costs are lower.

That leaves governments and consumers to boost economic growth, and as during President Roosevelt's New Deal, consumers can't save and spend more if they can't find jobs. It's a pity, since the long term unemployment rate is still 12 percent, including part time workers. So there is plenty of work to be done if we want to pay forward our economic growth to future generations.

It's a pity more of those "inflationistas," as I call them, who cry wolf at the slightest hint of rising prices, haven't visited the FDR Memorial where some of his most telling words are engraved, such as: "The test of our progress is not whether we add more to the abundance of those who have much, it is whether we provide enough for those who have too little."