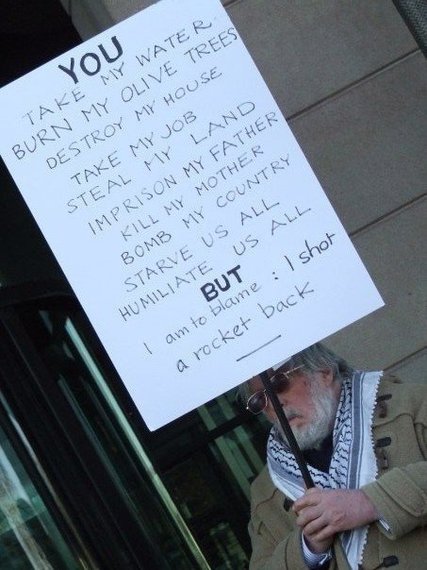 The international community could not care any less about justice. This is the unfortunate conclusion I have come to after watching the death toll rise day after day during the latest wave of violence to strike the Holy Land. By Friday, 100 Palestinians, mostly civilians and including women and children, had been brutally murdered and over 500 injured by Israeli airstrikes as part of "Operation Protective Edge," an unbounded response to Hamas's increased rocket attacks into Israel after "Operation Brother's Keeper." The latter involved the killing of at least 10 Palestinians, over 500 arrests, and the raiding and trashing of thousands of homes as the IDF searched for three kidnapped Israeli teenagers. The discovery of their bodies culminated in a horrific revenge killing, the gruesome beating of an American teenager, and countless other egregious human rights violations against Palestinians living under occupation.

In regards to the current conflict, the United States has largely defended Israel's actions. "No country can accept rocket fire aimed at civilians and we support Israel's right to defend itself against these vicious attacks," White House spokesman Josh Earnest said. The same right clearly does not apply to the Palestinians, who are left to fend for themselves without the $9.9 million dollars of military aid Israel receives each day from the U.S. Unfortunately, there seems to be no end in sight for Israel's blatant violations of international law, as Noam Chomsky writes, "As long as the United States supports Israel's expansionist policies, there is no reason to expect them to cease."

As for the UN, Secretary General Ban Ki-moon condemned the violence and urged Israel to show restraint, but if the UN's track record on Syria is any indication, these words are mere rhetoric and will most likely do nothing to halt the violence.

The Muslim world, which loves to lament the Palestinian cause for its own convenience, has also offered little beyond some harsh words against Israel. Saudi Arabia, which cited the failure of the Security Council to find a "just and lasting solution" to the Israeli-Palestinian conflict as one of the reasons for rejecting its seat at the Security Council last year, has since continued its economic and political alliance with the U.S., making it clear that mutual interests, such as energy production and fear of Iran's expansion, supersede the plight of the Palestinians. Other Arab states do not fare much better on the support scale, as they historically denied Palestinian refugees basic human rights by refusing them citizenship and failed to deliver on their promise of millions of dollars of sorely needed financial aid. This lack of solidarity with their Muslim brothers and sisters is absolutely despicable.

The seemingly impossible and deplorable situation can only be resolved if the reasons behind it are addressed head on. Interfaith dialogue groups and controversial exchange trips between Zionists and Muslims, well-meaning as they are, are not going to do much to improve the daily life of Palestinians on the ground or provide the security that Israel so covets. To be clear, this is not a religious problem involving anti-Semitism. It is a political, geographical, and human rights issue with only a political, geographical, and human rights solution -- end the occupation. Period.

If we cannot bring ourselves to allow for this based on politics and geography alone, then we should at least consider the human rights implications of the occupation, including security concerns on both sides, and for the Palestinians, constant fear of arrest, injury, and death, denial of freedom of movement, self-determination, and dignity and hijacking of land through illegal Israeli settlements. This is not only to the Palestinians' benefit, but also in Israel's favor as well, as its own population has also experienced casualties and attacks over the years.

In a bold move, Philip Gordon, a special assistant to US President Barack Obama and the White House coordinator for the Middle East, questioned Israel's commitment to peace and stated that the U.S. could not stop the increasing number of boycotts and isolationist policies hitting Israel in response to its egregious behavior.

"Israel confronts an undeniable reality," he said. "It cannot maintain military control of another people indefinitely. Doing so is not only wrong but a recipe for resentment and recurring instability. It will embolden extremists on both sides, tear at Israel's democratic fabric and feed mutual dehumanization."

Whether this results in a one-state or two-state solution remains to be seen, but just getting to that point will require intense international pressure on the U.S. and Israel to either get in line or face real political and economic consequences. Boycotts are just the beginning. The international community, including the UN and Arab states, must take responsibility, unify, and step up its game to find a peaceful and lasting solution. Emotional outbursts and mere rhetoric in a feeble attempt to save face and temporary cease-fires have not ever and will never cut it. Enough is enough. Every party in this conflict must ask themselves: Have we so lost our humanity that we would rather leave these people in a living hell for our own selfish gain? How long are we going to condone such blatant injustice?

For the sake of those innocent civilians suffering on both sides of the conflict, let's pray the answer does not take too much longer.