I'm a man who has a showtune for every occasion.

Almost 12 years ago, I was diagnosed with what the medical professionals charmingly called "full-blown AIDS." My viral load was through the roof, my t-cell count was 4 (a normal count is between 600 and 1500) and I had several opportunistic infections, including Pneumocystis pneumonia and thrush. Lying in that hospital bed, this lyric from the 1994 Broadway musical Rent came straight to mind:

"Will I lose my dignity? Will someone care? Will I wake tomorrow from this nightmare?"

I was frightened, confused, angry at myself for making the oh-so-human choices in my life that got me infected with HIV. All I could think of was the images I'd seen on television and movies of AIDS: horribly thin victims covered in Kaposi's sarcoma sores, being eaten away by the disease, shunned by family and friends, left alone in a sterile ward to wither away. I didn't know what the future could possibly hold for me, but my outlook was bleak.

Then a wonderful friend came to visit me, and reminded me that we weren't living in the 1980's or the 1990's. "Darling," he chided, "I think you have a bad attitude. Medical science has made fabulous strides in HIV treatments! HIV is now considered a chronic condition." He told me to simply follow my doctor's advice, and I'd be fine. Although my life completely changed with the diagnosis, I learned that HIV can indeed be managed with medication, along with making healthy choices in diet and exercise. I'm an incredibly healthy man, and I've managed to keep my viral load undetectable and my T-cell count high. It's miraculous and wonderful.

As I've lived these almost twelve years as part of the HIV community, I watch every movie and television show that involves HIV. Amazing films were created in the middle of the AIDS crisis, like An Early Frost in 1985 and 1990's Longtime Companion. Hollywood has also recently made movies like Dallas Buyers Club, the beautiful version of The Normal Heart on HBO. I watch documentaries about celebrities who died from AIDS like Rock Hudson, Freddie Mercury and Liberace. All of these stories touch me in a way that is deeply personal. They are my stories, my heritage, in a way.

But they are all tragedies. Every story in popular culture about HIV inevitably has a sad ending. There's always a dark cloud around the subject, a melancholy violin playing in the background as a character finds out the diagnosis. These stories are all historical, and necessary, but they aren't modern HIV stories.

In series television, there have only been a few shows featuring characters with HIV: The League, Brothers and Sisters and most recently, HBO's Looking. And of course, the terribly un-politically correct (but, c'mon! Totally hilarious!) episode on South Park.

As much as I'm glad to see any depiction of HIV in movies or television, I find myself wondering, where's the modern story about HIV? Where is an HIV story being told that doesn't end in a horrible death? How come no one is writing a story where someone has HIV, and it isn't the main thing about him/her? And where, maybe, the HIV+ person is actually happy?

Society desperately needs to see a fresh image of HIV. Despite the fact that the people with HIV can live healthy, normal lives, the negative stigma around people with HIV is incredibly powerful and prevalent. People need to be reminded, like my sweet friend reminded me 12 years ago, that we're not living in the hopeless times of the 80's and 90's.

It was out of this need to see a modern HIV story that I decided to write the web series, Merce. The lead is a character who is both HIV+ and joyful, at the same time. There's not a trace of tragic violin playing when the character's health is discussed. The show is funny, seriously silly and campy -- it's a musical! -- and has a lot of heart. It's a comic HIV story, and includes the reality of what it's like to live with HIV in America today. 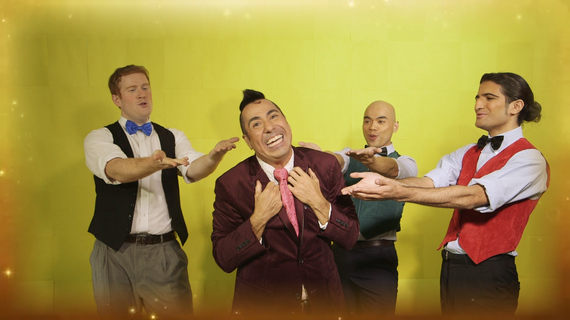 What is that reality? Well, Merce's life reflects my own. I'm not just surviving with HIV, I'm a man who lives a very full life. I'm healthy. I have an amazing and loving support system of family and friends. I work. I go to the gym. I have a love life. I laugh a LOT.

And I like to sing showtunes. Here's one of my favorite cheesy lines from the Jerry Herman musical, La Cage Aux Folles . It sums up pretty well how I feel today:

"So hold this moment fast, and live and love as hard as you know how, and make this moment last, because the best of times is now!"