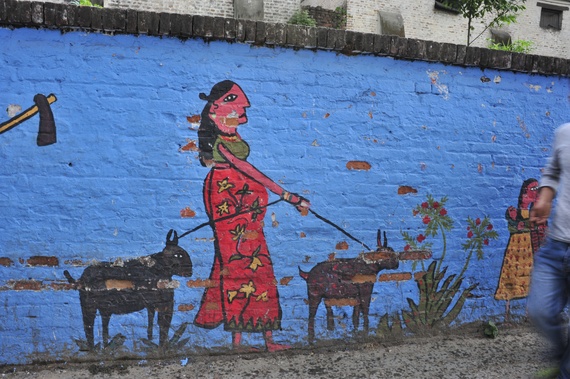 On 25 April 2015, Nepal was hit by a magnitude 7.8 earthquake, followed by a 6.7 aftershock. The death toll in Nepal now exceeds 8,000, with thousands more injured and/or homeless. After this first earthquake many more were in need of shelter, clean water, blankets, food, medicine and other supplies. To make matters worse a second major earthquake struck on 12 May. This was nearly as powerful as the first one (7.4 in magnitude).

We still do not know the number of causalities in remote rural areas from the first earthquake. The new damage from the second earthquake to Nepal's infrastructure (roads, power cables, telephone masts, and internet links) means that the initial relief efforts will suffer a set-back.

We know from previous disasters in low-income countries such as Nepal that help will be slower to reach rural areas. We fear, with two earthquakes in relatively quick succession, the worst is yet to come for many poor people living in remote villages. Infrastructure in rural Nepal is rudimentary and government services, like health posts, are patchy. The health service provision was unreliable particularly in these areas, where access was hard even at the best of times.

The Government of Nepal has asked for international aid after the first earthquake and the first aid arrived the next day from neighbouring India. Many countries have offered help. For example, the United States made US$ 7.6 million available for the most immediate aid according to USAID, whilst the Belgian government activated its so-called B-Fast team (Belgian First Aid & Support Team), China has given US$3.3 million, and the UK government's humanitarian response package for the Nepal earthquake now stands at 15 million pounds. Pakistan, Israel, the E.U., Australia and many more countries have also contributed. As have the Nepalese. These initial big relief efforts are vital, especially for the immediate support in finding people under the rubble, and bringing in clean drinking water, blanket, food, medicine and other supplies.

However, only last month, just before the earthquake, we published an editorial arguing that Nepal needs a greater focus on health protection to tackle emerging public health hazards (1). In this editorial we observed that "whilst Nepal has made some head way in disaster planning, much of this seems to be focused mainly around earthquake disaster planning only." The coming weeks and months will teach us to what extent this earthquake disaster management has been effective.

When the two earthquakes struck, as others with friends and family in Nepal, we were worried about those we know personally, especially in our field sites. Where we have been working and researching with the UK Buddhist charity Green Tara Trust, in close association with Green Tara Nepal for the past eight years, in an area just outside Kathmandu Valley called Pharping. The Green Tara intervention programme in Pharping centers around women's empowerment using women groups on maternal health issue as the vehicle for this development. The staff of our maternal health promotion programme, Green Tara Nepal are thankfully safe and keep supporting those in need. The bad news is that with the two earthquakes, one of our two major programme areas has been decimated.

Like so many people outside Nepal, our first reaction was that we need 'to do something'. We wanted to collect money for the earthquake victims of Nepal. However, in the spirit of our health promotion approach we have decided that, unlike a general appeal for help, like many friends of Nepal have set up across the globe, we would stick to what we are good at: (a) improving maternity care in rural Nepal; and (b) stimulating health promotion. The former because women will continue to become pregnant and babies will continue to be born; the latter because the risk is that any disaster relief will focus on the here and now. We, however, want our disaster relief to be based on the same principles as outlined here, (2):

Underlying philosophy of the Green Tara programme
The desired intervention or programme needs to be:
1. Community-based.
2. Culturally appropriate.
3. Women-centered, including working with those affecting women's access to improved health (e.g. mothers in law, husbands).
4. Small-scale.
5. Sustainable.
6. Making best use of existing resources, both from the government and others in the locality.
7. Low cost.
8. Involve stakeholders at all stages to increase ownership and maximise chances of sustainability.

Green Tara's work was very much embedded in this rural community. Our work in Nepal has led us to reflect on what the development community should consider in working towards sustainability, especially in countries affected by natural disasters. Universally, we need to think about the long-term and setting appropriate solutions. For example, Focus Humanitarian Assistance had deployed their trained team of female search-and-rescuers during the 2005 earthquake in Pakistan, as women caught in the rubble could not have a man rescue them that was not their relative. Furthermore, they also established community emergency response teams and training volunteers in disaster risk management and establishing community stockpiles in rural areas.

Finally, too often there is little or no guidance for maternal and newborn care in humanitarian crises. In the aftermath of this natural disaster there have been reports of diarrhoea outbreaks and chest infections in women and children. In the Mothers' Index Rankings of the Save the Children 2015 report, Nepal is currently 114 out of 179 countries. We are concerned that it does not slip into disarray post-earthquake. Our thoughts are very much with Nepal at this time.

Edwin van Teijlingen is a professor of Maternal & Perinatal Health Research at Bournemouth University. He trained as a medical sociologist. He has an interest in mixed-methods research, qualitative research and evaluation research in the field of either Public Health or the Organisation of Maternity Care.