Is it a province? Is it a country? It's a peninsula, it has a large rock - and it's definitely a geographical and political oddity, to say the least.

On the westernmost side of the Mediterranean Sea, we find the opening to the vastness of water leading to the East coast of the USA, via the North Atlantic Ocean.

You could say that the basin has a large representation of styles, cultures, languages, and terrain. The neck of the sea is at its easternmost entrance, where Gibraltar stands guard. Its name is Arabic ( جبل طارق , or Djebel Tariq), its location is at the bottom of Spain, but its nationality is British. And it has the Rock.

In Roman antiquity, the Rock was considered to be one of the two Hercules Columns, baptized The Pillars of Hercules (In Latin: Columnae Herculis; in Greek: Ἡράκλειοι Στῆλαι; in Arabic: أعمدة هرقل; in Spanish: Columnas de Hércules) and were believed to be flanking the entrance to the Strait of Gibraltar - the other one being the Djebel Musa, on the African coast.

Yes, this is Great Britain. Odd, isn't it?

Gibraltar is a "possession" of the Great Britain Kingdom since 1704. The British armed forces keep a strong presence there. Spain is claiming proprietary rights, even though its population is mostly against it.

The delicate situation of Gibraltar is a major cause of strain in the Spanish-British diplomatic relationship. Gibraltar is in the European Union.

Its physical border with Spain is the shortest one on the planet, at just 1,200 meters. Gibraltar has 12 kilometers of coastline, on two sides. The highest point is the famed Rock, at 426 meters of height.

The Rock is a natural reserve where Barbary monkeys roam free - the only place in Europe they do so. Without any exploitation of natural resources of any kind, the Rock of Gibraltar relies on a desalination plant inside it. 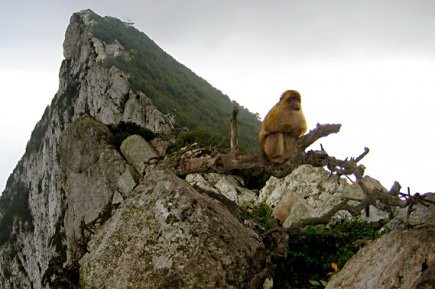 The Queen of England (I wonder if she speaks Spanish) is the head of state and a symbolic governor holds the fort, so to speak.

Gibraltar is looking with some anxiety to the Brexit happening, which may or may not take place. They say that would be bad for the financial situation of Gibraltar.

There are about 32,000 inhabitants on the speck of land, mostly Spaniards and Brits, with a few other Mediterranean nationals thrown in the mix.

The official language is English, used for governmental purposes and for business. A lot of people also speak Llanito, a unique tongue derived from, you guessed it, Spanish and English, and definitely only spoken there.

The official motto of Gibraltar is "Nulli expugnabilis hosti" , which in Latin means "No enemy shall expel us". It says it all. 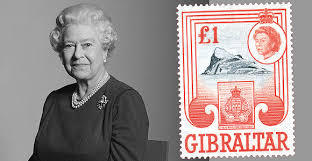 Only British airlines use the tiny airport, and entering Gibraltar is a strange experience. Barely checking passports, the customs officer waves you along, and you suddenly find yourself directly on the tarmac.

The road to the "city" crosses the airport runway. And so, you must wait for the green light to cross over to the country. In no time at all, you walk from Andalusia (Spain) to England.

And yes, they do sell fish & chips - albeit no longer wrapped in newspaper, but with cleaner white crispy paper, served with British ale.

Grottos and monkeys are the two main attractions for the wandering pedestrian tourists. The animals often pose for photos, but also often expect some treat in return, and can become agitated if they don't get any.

You can get to the top of the Rock via a small funicular, or you can hike it and discover the wonderful views from your walking path.

It's tempting to hop to the African continent from here - you can see it in the distance. A ferry joins the two countries of Gibraltar and Morocco in about 90 minutes.

Questions / Comments = sidoniesawyer@gmail.com
Visit my website to read more of my stories.