Cape May, New Jersey with its historic Victorian architecture may appear to share little with New Orleans, but when the end of the road meets the water, music become the vessel for cultural exploration. Key West is an outpost of year-round hedonism; Rotterdam is the port to Europe; Monterey is a Pacific biosphere; and New Orleans, well, is New Orleans. Over the last couple of decades, Cape May, the tail of New Jersey, has been promoting its own musical identity from beyond the tradition of summer family fun surrounded by the sea, to a singer/songwriter gathering that consumes a spring weekend, to an International Jazz Festival.

Music has become an instrument of healing along much of the Jersey Coast after a devastating Hurricane Sandy. Having largely avoided the destruction of shore communities further north, but with New Jersey's ever more recognized music culture, Cape May is now a cornerstone of venues and artists. A couple of weekends earlier, Ambassador Mo and I wandered into the Mad Batter on a late Sunday afternoon. The sleepy exterior of a town still waking from a long winter was dissolved in our preconceptions as an open-mic evening broke into one of the more memorable music concerts bringing together unique local and national talent. We went to sleep that night at the Victorian Inn pleasantly relaxed by the robust air and fresh sounds reverberating. I must admit my voice was a bit hoarse as I could not resist joining in a few songs, among them "Delaware Bay" and "I Love Cape May."

We first ventured to Cape May as the ferry connection that links New Jersey with the Delmarva Peninsula. A couple more times we had the opportunity to explore the rich ecology of the wetlands as well as walk the endless beaches. Thus, the inner town of Cape May was a bit of a discovery when we meandered into what was then the Cape May Jazz Festival.

There is at least another person in Cape May who knows the meaning of Le Bon Temps Roule (Let the good times roll.) Michael Kline is a former New Orleans resident, jazz radio host, and music-artist agent who is now the producer of the aptly named Exit 0 International Jazz Festival. (Cape May is the last exit, or exit zero, on the Garden State Parkway.) With a glass of wine by the fireplace of the Brown Room in historic Congress Hall, Michael gave me a bit of his longer-term vision as well as current plans for the festival -- as much a blues as it is jazz festival.

Like the New Orleans Jazz & Heritage Festival, the Exit 0 Jazz Fest is more inclusive of a broader variety of music and artists from around the globe. Some of its more prominent musicians are ambassadors for their art and represent a rising tide of diplomat-artists. In the near future, Exit 0 International Jazz Festival seeks to become one of the linchpins in the rosary of international festivals, most of which start where the road ends: Rotterdam, Monterey, Newport, New Orleans, etc.

This year Exit 0 will initiate a late spring schedule, May 30 - June 1 (as well as a fall event, November 7-9, 2014). A three-day, weekend trifecta of over 100 international musicians with a palette of styles ranging from jazz, soul, blues, and R&B will entertain tourists in the nation's oldest seashore resort, also a National Historic Landmark City. The Emlen Physick Estate on Saturday will be transformed into an outdoor stage venue with world-class performances and a variety of styles: Daisy Castro, a violinist with Gypsie-Jazz Influence; Vince Giordano's twenties and thirties music heard on HBO's Boardwalk Empire; Matuto's Appalachian-gone-Afro-Brazilian sound; and culminating with Jon Cleary, born in England, but New-Orleans-bred, whose great hooks and slanky New Orleans feel cements a great experience. Jazz at the Estate celebrates a quarter-century for the Cape May Music Festival and is a new collaboration between Exit 0 Jazz and Cape May Mid-Atlantic Center for the Arts & Humanities (MAC.)

Infused European-style, like Charleston's Spoleto, and the ever present sound of the surf accompanies visitors as they stroll from venue to vendor, all senses to be tantalized. Epicurean delights including South Jersey foods, locally produced wines, spirits and brews, and of course crafts and great shopping satisfy that other appetite.

Festival Headliners will appear each night at Convention Hall:

Dee Dee Bridgewater: American Jazz vocalist, thrice Grammy-Award-winning singer/songwriter, and UN Goodwill Ambassador will captivate the stage Friday. This global diva has performed the world stage at the inaugural International Jazz Day Concert at UN headquarters organized jointly by UNESCO and the Thelonious Monk Institute of Jazz. In fact, April 30 has been designated International Jazz Day, which spotlights jazz as a diplomatic bridge uniting cultures and people around the world.

Roy Hargrove: Visitors will not have to travel to Strasbourg - Saint-Denis, Paris to hear American Jazz Trumpeter, two-time Grammy Award Winner, Roy Hargrove. Having played with legends Wynton Marsalis (who coincidentally discovered his talent while visiting Booker T. Washington High School for the Performing Visual Arts) and Herbie Hancock, Hargrove will have his audience caught in the verve of kool jazz and a blend of funk, hip-hop, soul and gospel Saturday night.

The Dirty Dozen Brass Band and Kermit Ruffins & The Barbecue Swingers is an apropos finale to a special A Night in New Orleans.  If you haven't experienced Kermit at his former New Orleans speakeasy or New Orleans Jazz Fest, perhaps you heard his unique funk and brass on the set of HBO's Treme.  Influenced by Louis Armstrong, this native New Orleans great will have the audience moving to his vocals and trumpet climaxing Sunday night.

Throughout the weekend, club venues like The Boiler Room in Congress Hall, Carney's, Cabanas, Harvey's Bar & Grille, Marq's Pub, and Aleathea's open their doors to revelry, great music and lagniappe -- Cajun for "a little something extra."

You get a special feeling when crossing the bridge into Cape May.  Even if you've never been there before, you'll have a deja vu experience. Exit 0 International Jazz Festival is a month away, and I can't wait; for I Love Cape May.

Lyrics to "I Love Cape May," by Kevin Mulderig 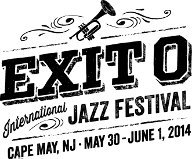