So you have been entrusted with a very important mission -- in this case, trying to convince several countries in the 1950's to allow take-off and landing of a new, super-secret aircraft, the U2, which would allow the U.S. to conduct surveillance over the USSR at such a high altitude that Soviet MiG-17s would be unable to shoot them down.

One problem, however -- a few key countries, like Pakistan, would not normally allow U.S. spy planes on their territories. What to do, what to do? Such was the dilemma of Anthony Marshall, who worked at the CIA at the very beginning of the U2 program. 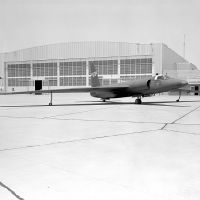 Marshall himself led a fascinating but ultimately tragic life. He became Ambassador to Madagascar and Kenya and later was a producer on Broadway beginning in the early 1980's. However, in 2009 he was convicted of grand larceny in an attempt to bilk his mother, famed blue-blooded philanthropist Brooke Astor, who suffered from Alzheimer's. He was sentenced to one to three years in prison but only served eight weeks after he was released for medical reasons.

MARSHALL: I took a look at the Foreign Service and decided that that was probably not what I wanted to do. And I contacted again a friend who gave me good advice, by the name of Bill Donovan. General Donovan was head of the OSS [Office of Strategic Services] during the war, as we all know, and in 1947 helped to create the CIA as a peacetime agency....Then a good friend of mine by the name of James A. Cunningham, Jr., who I met at Brown....

When I came back from General Donovan's, having sent me down to Washington, I said to him, "You know, I just had a meeting at the CIA and they look like a pretty good organization. I think there's a future there."

You know, he'd never even heard of it. So he promptly went down there, and they offered him a job to head up recruiting. So, back to 1952, when I was still with the Special Policy Staff, Jim and I had lunch one day and he asked me, "Are you happy in your job? How's it going?" I said, "Well, it's not something I want to stay with forever." He said, "Why don't you come work with me?" And so I did....

Then Jim left his job as head of recruiting in the Agency because he came to the attention of a man by the name of Richard M. Bissell (at left). Dick Bissell, who had just been assigned the job by [CIA head] Allen Dulles to take on a special extremely, extremely covert U-2 project. And Jim went over to that. I just lost track of him. 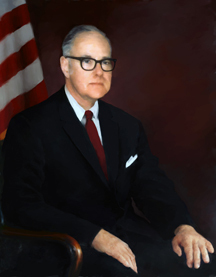 Until after another year or so, Jim and I had another lunch - we seemed to only think when we were eating. It happened in Washington and elsewhere. He said, "You know, would you like to make a change again?" He said, "Dick took me on as his special assistant and made me head of all the administration for the program. We'll be moving from the little site - a small two-story building (which doesn't exist anymore now) on Virginia Avenue to much larger quarters - 5000 square feet - across from the Metropolitan Club. Would you consider - I've recommended you - that you be a special assistant?" So, I said yes.

Perhaps, of all of the things he gave me to do, the most interesting was to go abroad to obtain from heads of state permission to operate the U-2 from their country. And this really was quite interesting on occasion, such as when I went to Pakistan. I also went to Turkey. We obtained permission from the Turks to operate from Adana in southern Turkey. But I also did briefings in various places. I went with Dick to Tokyo where we set up an operation which became later very successful and branched off.

The one to me which was the most interesting was to get permission from the Pakistanis. I went to Karachi which was still the capital and had an appointment with [Iskander] Mirza, who was then the President. I went to see him and I said (naturally, I did not tell him what we were doing; we didn't do that in the Agency) we had a special plane that had been adapted to obtain air samples of the atmosphere and could we have permission from his country to do this from an airfield somewhere in the northern part of Pakistan?

So, I went off and through our people there attempted to arrange an appointment to see [at right, Huseyn Shaheed] Suhrawardy, who was the Prime Minister, and was told that he was sick in bed with the flu. Also, they were going to have the Baghdad Pact Meeting shortly and the ministers were already arriving. He would be hosting a party and would probably get up briefly for that, but it would probably be impossible to see him. 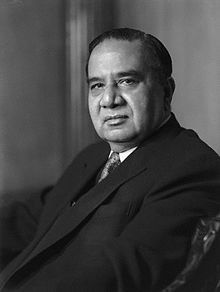 Nevertheless, they asked for an appointment, and he said he'd see me, so I went around to his home and was shown into his bedroom. He was lying in his bed with a thermometer in his mouth, and I thought this was a hell of a way to meet a Prime Minister. And the room was absolutely frozen, enough to give him a cold and he had phonograph records scattered all over the floor. I had time to look around while I waited for him to take his thermometer out, which he did when a wrist alarm went off.

Anyway, I told him my story and he said, "Well, it sounds fine to me. You have my approval. On the other hand, I'd like you to see the Chief of Staff and get his approval, and don't tell him that you've seen me."

I,unparenthetically, thought then and in retrospect feel I should have gotten a darn sight better briefing before going out. I think that probably the reason I didn't is that there was absolutely no coordination, no contact between any level except the absolute top level, between State and the Agency. Therefore, to have me go over to State and be briefed on this would have been a little obvious. The Agency had an interest in it, but, nevertheless, I think that somehow, I should have been briefed on the politics of the country.

Anyway, true to what he said, that evening he was giving a reception in the garden of his house for the Baghdad Pact. It was a very jazzed up reception. The colors of the national flag of each of the countries as lights of each of the trees in the garden. And there were probably three or four hundred people there. So I borrowed a tuxedo from the Chief of Station [head of the CIA at the embassy] which, fortunately, fit me well enough for the occasion and went to this with him. I don't know what he wore; maybe he borrowed it from somebody else, but anyway we both went because I didn't know what the Chief of Staff looked like. We finally spotted him, but he was talking to the Chinese ambassador. That was hardly the group we wanted to break up. So we waited for a few minutes.

The Chief of Staff walked away, and I then followed him. He was a glorious looking man; all dressed up in his white uniform with a full chest of medals, quite a bit taller than I was. He turned when I addressed him - the moment when I started - and unfortunately I had started to talk to him and was getting to the point, and this was the only opportunity I had, all of which was a bad way of doing diplomacy or clandestine work or whatever you want to call it. If I'd been he and been interrupted at a cocktail party, I wouldn't have responded too well to a serious conversation. It's neither the place nor the time, but I hadn't chosen it. I didn't choose it, but I had started it, and I saw that he was absolutely drunk as a lord, so I had to continue.

Then he poked his finger into my stomach and said, "You go back and tell your President that we need more tanks." So I then reported to Suhrawardy exactly what had happened. And he said, "You've done that. Leave him to me."

I said, "No. He said no, and I want to be sure of this. And I would appreciate your making arrangements for an appointment for me in his office." Well, it did take place the next morning. And he was courteous and agreed we could have a strip up in Lahore that we could use. I don't think he was too happy about seeing me, but nevertheless it was done. It was wrapped up what I considered properly under the circumstances.

So, anyway, I hopped on a plane, which we had come down from Europe with some other people on it. We went up to Lahore and looked at the airfield. It really wasn't that adequate. It turned out that we instead used a strip up in Peshawar. But that certainly was one of the more fun incidents.