Was mom worried when you made your big move to Los Angeles? She always believed in your hopes and dreams, but as she watched you spend your post-graduate years living with five roommates in a one-bedroom, working on a few sketchy reality shows and driving an Uber on weekends, it's no wonder that every phone chat with her ended in a pitch to move back to your hometown.

But now you've made it and you can invite her to town to celebrate. You have an extra bedroom, vacation days -- you won't ask her to cover the tab for brunch at Panera this Mother's Day. Show mom you've made it in the big city by taking her out this weekend to someplace special. Here are some great spots that will make her happy she paid for your degree in film.

The Guild: Brunch on Sunset
Is your mom enamoured with the gliz and glam of the silver screen? Then enjoy bottomless mimosas with her at The Guild. Located in the heart of the Sunset Strip, this newly opened small plates eatery took over the building that formerly housed the Screen Actors Guild during the Golden Age of Hollywood.

Executive Chef Charles Cho oversees a menu of creative American favorites. The restaurant just opened for brunch last weekend, so your mom can definitely be one of the first to Instagram the wild mushroom bruschetta with quail eggs or the lobster benedict served on a cheddar chive biscuit and topped with bearnaise and caviar. 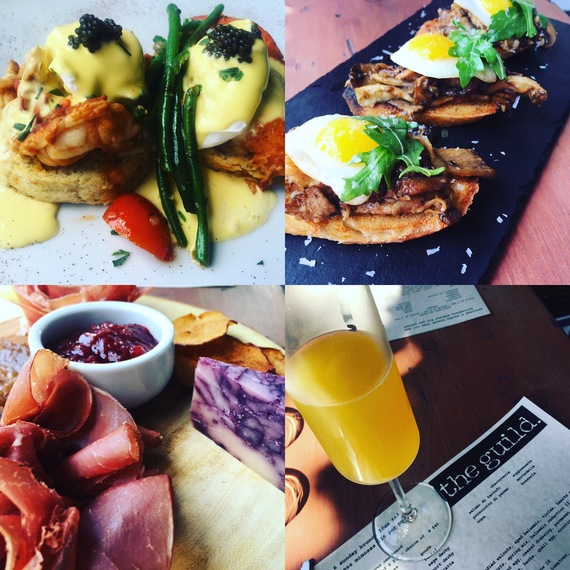 Beautiful bites at The Guild - Photos by Gina Hall

Restaurant owner Diego Leporini is also the establishment's wine director and has assembled a list of Old and New World wines from smaller producers. I can highly recommend pairing brunch with the Trefethen chardonnay from a family operated winery in Oakville.

Blue Plate Oysterette: Ocean views and local vibes
Is mom flying in to visit from the East Coast? Snag her a table on Blue Plate Oysterette's intimate patio overlooking the Pacific and she'll understand why you don't want to leave SoCal. A local favorite in Santa Monica since 2009, the vibe is East Coast clam shack meets L.A. beach town. Come for the oysters flown in fresh daily, stay for the decadent lobster mac and cheese. The place also does a top-notch take on the lobster roll fad. 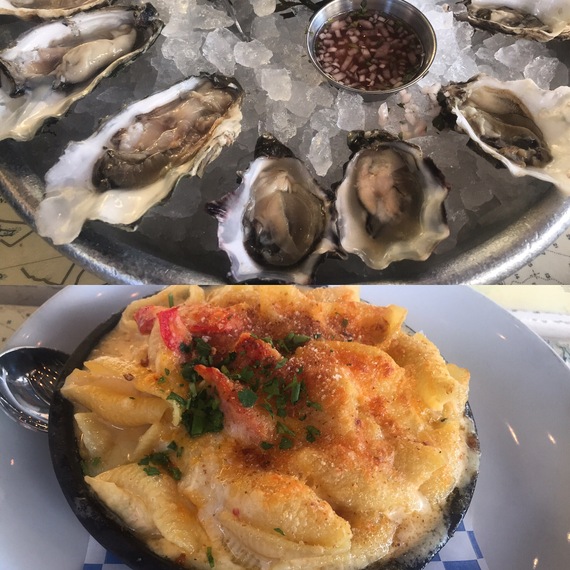 Hinoki & the Bird: Upscale and low key
Hinoki may be a high-profile restaurant, but the natural light and relaxed ambiance is pure California cool. Make sure your mom has adventurous taste buds because you'll want to share dishes like the Lemongrass lamb sausage with hoja santa and chili-lime sauce or the Santa barbara spot prawns in coconut broth. The restaurant, which is usually closed on Sundays, serves up a special brunch menu on Mother's Day that includes exotic dishes such as challah french toast with bananas, tonka bean and maple syrup or croque monsieur with Niman Ranch ham, Comte cheese and milk toast. 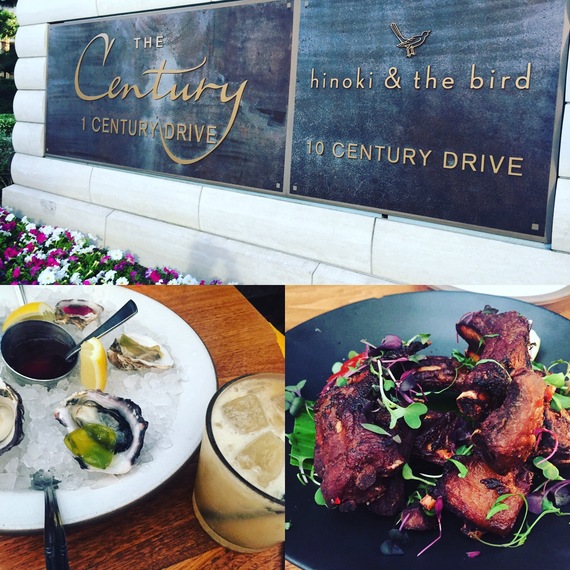 Think about arriving at Hinoki by Uber because the restaurant's curated cocktail list is not to be missed. I can recommend the refreshing take on the Harvey Wallbanger -- vodka, fennel juice, vanilla bean and orange simple.

You can't go wrong with any of these picks, so you're sure to have one happy mom.