Over the past few weeks, renowned British street artist Banksy has taken New York City by storm, leaving a trail of spray paint in his wake. But graffiti is nothing new here: The city has long acted as a blank canvas to artists, who have left their mark in a variety of formats, from bulky name tags to intricate murals. It's easy to ignore the large swaths of color that grace the New York skyline, but take a few moments to acknowledge the city's street art and you'll realize that you don't need to shell out $25 at the MoMA to enjoy a bounty of modern art. Just take a stroll around the following neighborhoods. 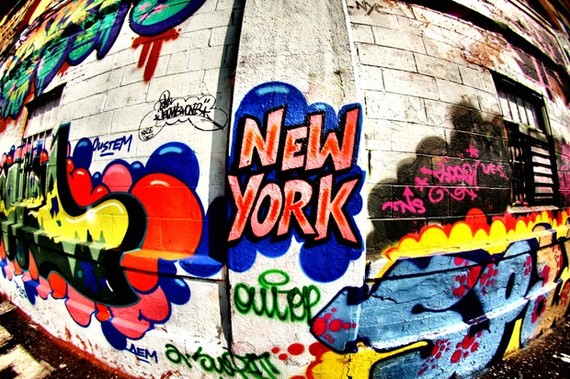 If you're interested in taking a guided tour of New York City street art, check out Time Out New York's list of recommended tour companies. 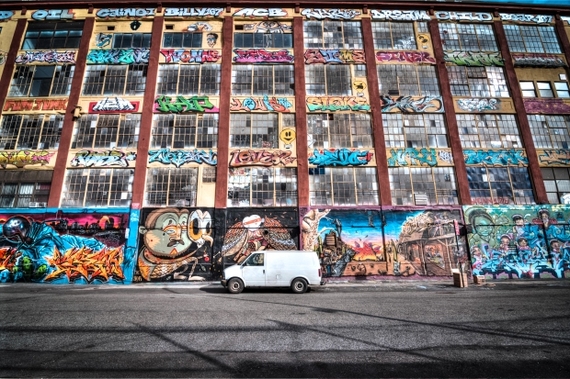 A mere glance at this derelict warehouse on Davis Street in Long Island City, Queens (near MoMA PS1) might cause you to shrug it off as an eyesore. But take a few minutes to study the scrawled names and bright portraits and you'll see 5 Pointz for what it is: A gathering spot for the city's taggers, both novice and experienced. Bright bubble letters and stylized forms represent all walks of life that that have found their way to 5 Pointz -- a true picture of New York's melting-pot culture. If you haven't seen it yet, you better do so soon; the developers of two large apartment complexes hope to tear the building down by the end of 2013, although members of the Long Island City community are fighting the demolition plans. 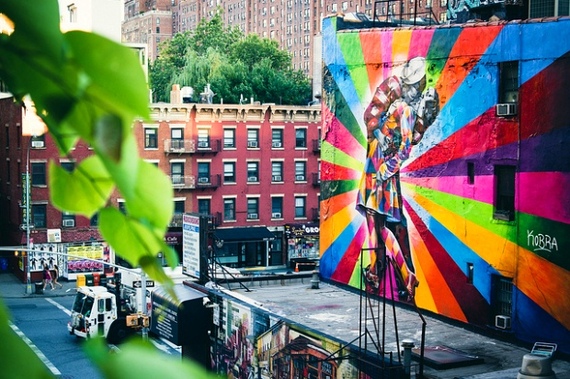 New York's High Line is the perfect example of transforming something old and rundown into something beautiful and enjoyable -- so it only makes sense that street artists would want to showcase their work here. Sure, you'll find the usual name tags etched onto the adjacent buildings, but you'll also spot several breathtaking murals like the one pictured above by artist Kobra. The three-story work is a rendition of Alfred Eisenstaedt's famous photograph, "V-J Day in Times Square." Only Kobra's version is anything but black and white. You'll have an excellent view of the mural from the High Line at 10th Avenue and West 25th Street. 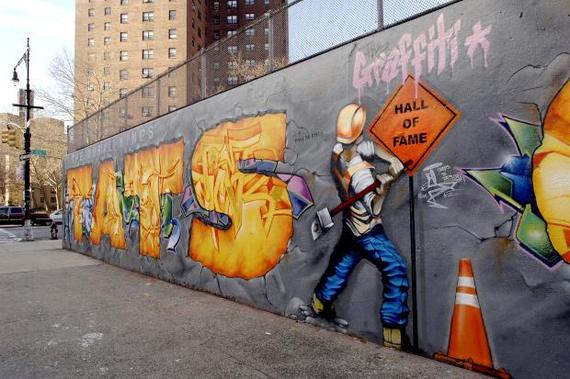 In 1980, "Sting Ray" Rodriguez founded The Graffiti Hall of Fame in an effort to provide East Harlem's youth with a creative outlet. At the time, it was simply a wall within the Jackie Robinson Educational Complex at East 106th Street and Park Avenue. But today, the wall is a tribute to the hundreds of artists that have visited over the past couple of decades. Those familiar with graffiti will recognize some of the work; known artists such as Dez, Skeme and Iz the Wiz have all left their mark here. Even artist Cornbread -- who started decorating the streets of Philadelphia in the 1960s -- left an impression at The Hall of Fame. 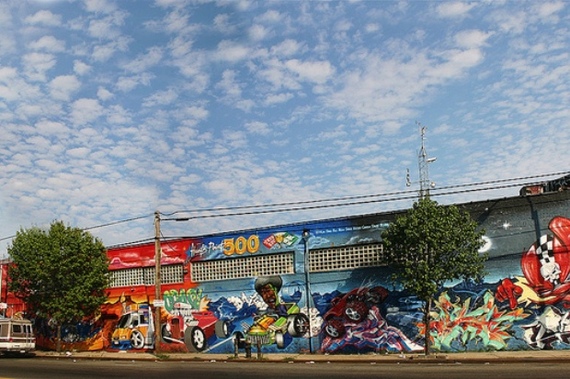 In 2008, Bronx-based graffiti artists, the TATS Cru, transformed 200 feet of barren wall into a stretch of colorful murals. And with the help of fellow artists like Goldie, Daze, Crash and even Los Angeles-based Seventh Letter crew, the Hunts Point Murals are constantly in flux, the wall changing to reflect those who were there last. Although the Hunts Point Murals are a bit of a trek from Manhattan -- take the No. 6 subway line to Hunts Point Avenue (about a 20-minute ride from Lexington Avenue and 59th Street) and head to Drake Street, south of Spofford Avenue -- the trip is worth it should you catch an artist assembly. TATS Cru hosts regular artist gatherings; you can check the group's Facebook page for news on upcoming paint sessions. 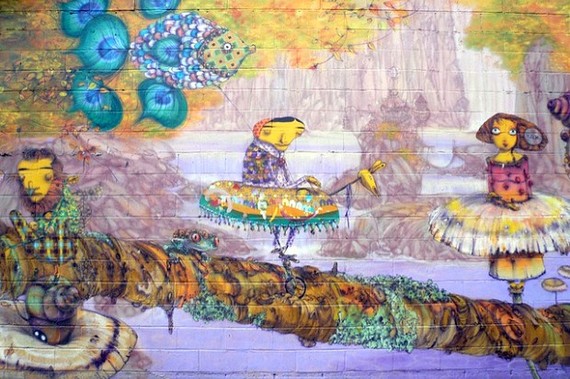 Coney Island's walls have long reflected the aerosol artists who've passed through, and the bricks lining Stillwell Avenue are no different. Outside the Stillwell Avenue-Coney Island subway station, a 130-foot mural provides the perfect intro to this whimsical Brooklyn neighborhood. Part of the Dreamland Artist Club project, the colorful cartoon characters are widely recognized as one of the best works by identical twin brothers from Brazil, Os Gemêos. The artists take their inspiration from a variety of places, leaving surreal representations of Sao Paulo's social and political issues on city walls around the world. In Coney Island, you'll see fun characterizations of dancers and other figures along Stillwell Avenue. 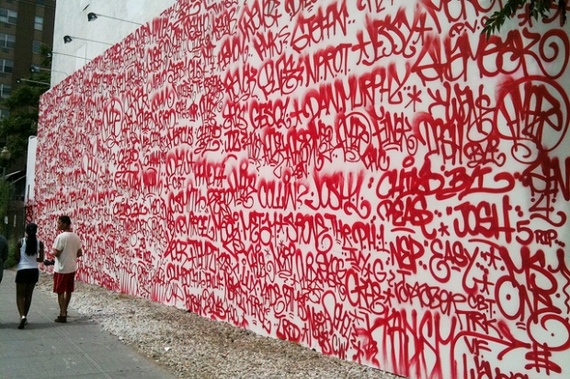 Manhattan's Lower East Side is a hot bed of street art, with the Bowery Graffiti Wall being one of the more famous examples. At the intersection of Bowery and East Houston Street, this mural site has offered a place of artistic expression since 1982 when renowned artist Keith Haring first claimed it as his blank canvas. At the beginning of 2013, artist John "Crash" Matos left his mark with a giant portrait of Popeye, using everyone's favorite sailor-man as the inspiration for a Pop-art masterpiece. Most recently, graffiti master Swoon took ownership of the space, with themes relating to Hurricane Sandy slowly beginning to take shape.

[See: Best Places for a Bachelor of Bachelorette Bash] 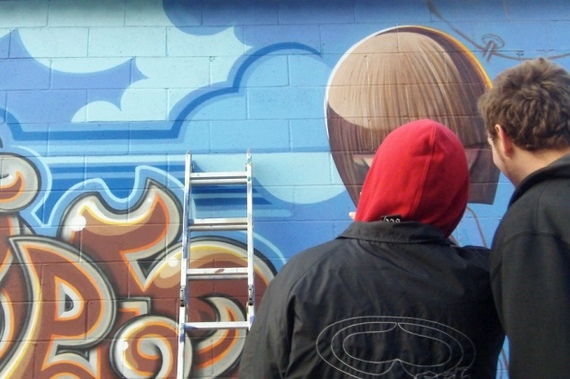 A relatively new addition to New York's graffiti scene, The Bushwick Collective emerged at Troutman Street and St. Nicholas Avenue in 2012. Created by Bushwick native, Joseph Ficalora -- with the help of well-known graffiti artists like Sheryo, Yok, Cost, Swoon and Dan Witz -- this collection of artwork includes both portraits and caricatures. You can enjoy the murals every day of the year, but to make the most of The Bushwick Collective experience, stop by on June 2 to enjoy the annual neighborhood block party. You can learn more about the murals and upcoming events on the Collective's Facebook page. 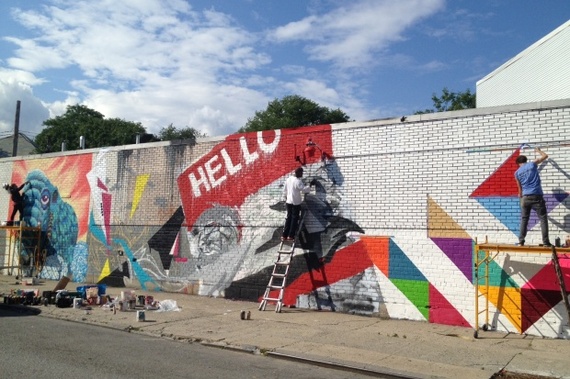 If you want good Greek food or a Steinway piano, you head to Astoria. And if you want to catch sight of groundbreaking street art, you still head to Astoria. This neighborhood in Queens is home to the Welling Court Mural Project, a crowd-funded art event hosted by Ad Hoc Art that takes place every summer and welcomes such big names in graffiti as Lady Pink, Swoon and Skewville. (The artists pictured in the above photo are -- from left to right -- Vera Times, SeeOne and Hellbent. The artwork sandwiched between that of Vera Times and SeeOne was done by artist Col Walnuts.) The purpose of the Welling Court Mural Project was neighborhood beautification, and though street art isn't everyone's idea of fine decor, the bright lettering and neon scrawls add a sense of life into the otherwise underwhelming area. You'll find the mural along Welling Court between 30th Avenue and Vernon Boulevard. Check the Ad Hoc Art website for the 2014 event dates. 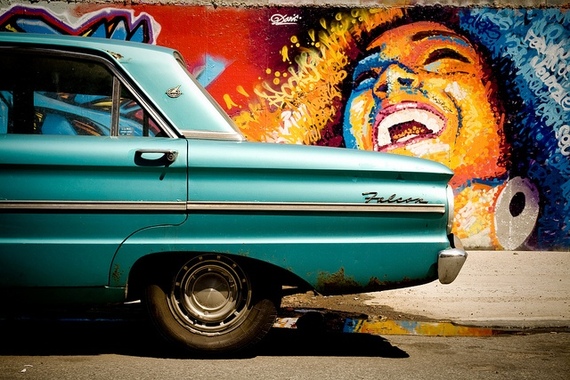 Williamsburg's low cost of living has long beckoned to "starving" artists, which ultimately lead to the Brooklyn area becoming a breeding ground for graffiti. The influx of new creative residents has fostered innovation; artwork that graces the walls in this area ranges from traditional "American" graffiti (think bold lines and heavily stylized text) to more European-esque murals, many of which were created using stenciling or modeled after posters. You'll see work by known artists like Os Gemêos (at North Third Street and Wythe Avenue), R.Robots (at North Third Street and Bedford Avenue) and Nick Walker (at Roebling Street and Metropolitan Avenue). 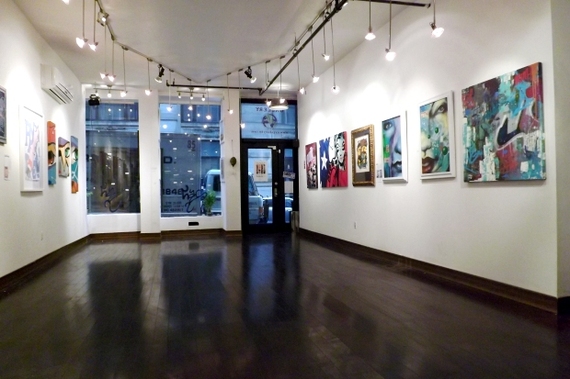 If you're interested in experiencing New York's street art scene but don't want to actually take to the streets, you'll find examples of works by established graffiti artists such as Taki183, Crash, Cornbread and Metro AKA Meo hanging in Gallery 69. Hosting regular shows since 2010, this gallery sits on Leonard Street (between Church and Broadway) in Tribeca. Unlike the art you'll see along the streets of New York, the works that grace the Gallery 69's walls are available for framing and purchase.