Few consumers categories have seen the explosive adoption that wearables have - especially fitness wearables.The category has gone from zero to tens of millions in sales in less than five years.

Without smartphones, however, the wearables market is likely nothing more than a fad for devoted athletes and passionate (or overzealous) weekend warriors. Smartphones have fueled growth in two core ways:

Today in the U.S., 21% of online adults use a wearable device [see graphic below]. The high adoption of Fitbit can be attributed to a combination of its hardware and software but, when you peel back the covers, it's the software that enables Fitbit's success. The combination of machine learning, which gives consumers accurate data and insights, and the added apps layer, which allows users to act on those insights, creates a winning formula. 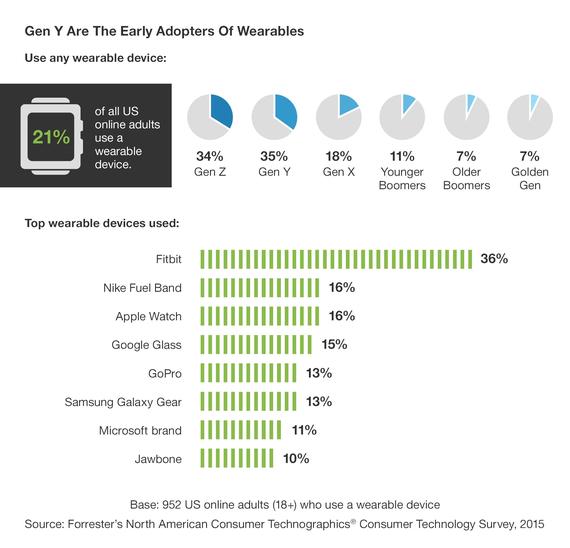 The result is that fitness wearables have matured from a "fun to have" gadget for those tackling a new goal, to a category impacting the financials of entire industries. For example, health payors and providers are starting to imagine the impact of more active members on the bottom line. We can expect to see sales of fitness wearables like Fitbit that target a broad audience grow for years to come.

The other leading wearables category, the smartwatch, has been around a few years, but Samsung, Pebble, LG and others quietly awaited Apple's launch in the spring of 2015. Few companies outside of Apple can create consumer demand for a product they've never heard of or never knew they needed, so it's no surprise that Apple quickly jumped to the top of the smartwatch category. Its customers are early adopters and brand enthusiasts. Expect Apple to gain share with subsequent releases as the price goes down and brands figure out the best use cases for an on-wrist device.

My colleague, Gena Fleming, writes more about this data in her new blog post, which also details additional findings from the annual report, 'The State of Consumers and Technology: Benchmark 2015, US.'