In this rich tapestry of a nation, people can call sub sandwiches whatever they want and it'll be completely, 100% kosher (in the metaphorical sense -- about 1% of these sandwiches are actually kosher). Of course, that doesn't stop the terminology you use from revealing a whole lot about your backstory every time you order a sub by any other name. For example, "grinder" folks: we know about your disdain for Fever Pitch.

Here's what your name for a sub sandwich says about you.

Where you're from: New England
If you now live anywhere other than where you grew up (New England), you frequently get made fun of for saying weird stuff like "bubbler", but the people who do it are just jealous because Boston's got David Ortiz. Grinder day was your favorite school lunch day in junior high, and inevitably meant either meatballs or some other hot sandwich that was equally tough to bite into (hence the name). Sometimes you gripe about the difference between cold "subs" and hot "grinders", but nobody in your current city can understand a word you're saying. You loathe Fever Pitch.

Where you're from: Westchester or Yonkers, NY
You claim to everyone that you're from New York City, but people can sense that something's ever-so-imperceptibly off, unless, of course, they witness you order a sub sandwich and call it a "wedge". Then your carefully manufactured facade falls away, and you're revealed for the penitent suburbanite you really are. You will pay the person who discovers this $1,000 and a wedge to keep their mouth shut. 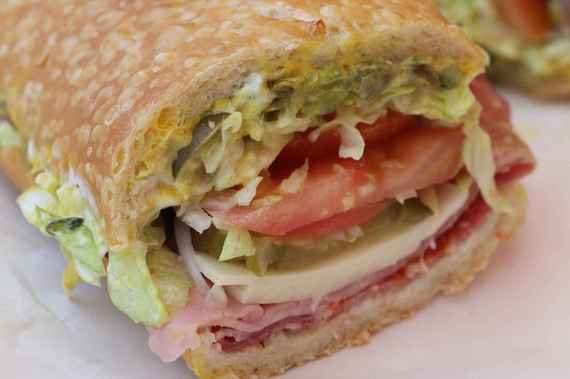 Where you're from: Greater Philadelphia
You're from around Philadelphia, or a part of New Jersey that's close enough to that city that you feel like you can hide the fact that you're from New Jersey by claiming to be from Philly instead. A hoagie is a big-city sandwich, according to you, and is usually filled with some dyed-in-the-wool Italian fixings like prosciutto, soppressata, Provolone, or... scrapple (and NEVER mayo). You're adamant that the hoagie was invented in Philly, just like liberty, even though both have actually been traced to Italy, sometime in the last couple of millennia.

Where you're from: New York City
The story of how the term "hero" came to be might have eluded you (it's not actually a corruption of the word "gyro", which most likely came to the U.S. via the Greek food boom that originated in... Chicago?!), but that doesn't matter -- you're eatin' here. The hero is probably the most versatile sub name on this list, coming in hot and cold varieties, and encompassing a breadth of fillings (corned beef, meatballs, pork cheek, etc.) that could only be found in the best city on Earth! Which, if that needs any more elucidating, is New York. Sheesh. 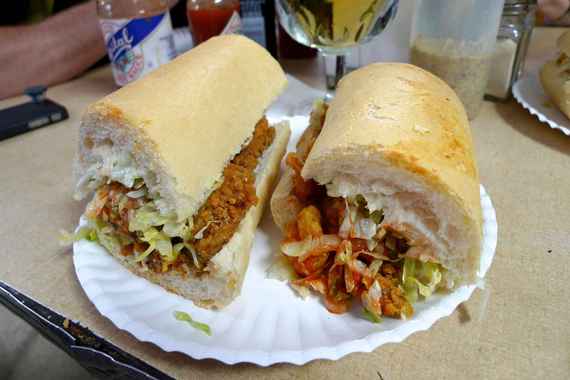 Where you're from: Louisiana or the Gulf Coast
You're aware that a po' boy and a sub aren't the same thing, per se, but that doesn't really keep you from referring to most sandwiches as po' boys anyway (or at least wishing that they were po' boys, and daydreaming with a bluesy melancholy). Fluffy French bread -- instead of a sometimes-seeded Italian roll, is a must for you when piling the fried stuff, or roast beef -- high. You're damn proud of the folksy origins of your preferred sandwich, and you have an encyclopedic knowledge of the odd lexicon of terms used to specify your order (stick, shorty, debris... just let everyone else in on this lingo so we can enjoy it too).

Where you're from: Boston. Just Boston.
You think the people who call subs "grinders" haven't been to the North End enough and need to get in touch with their roots, which involves patronizing your buddy Joey's bar, the "Wicked Local Tap & Grill". Half of your diet consists of cannolis. The other half is salami spuckies. You own The Departed on both DVD and Blu-ray.

Where you're from: New Jersey
Blimpie is the Kleenex of sub names. Some company in Hoboken did sub sandwiches so well that their brand became synonymous with them (the owner thought the word "sub" sounded too unimaginative, and decided to go with an icon of inflation instead). Now, the word "Blimpie" still brings to mind an incredibly stuffed Italian sandwich, and you crave one every time you think of those Hoboken streets or hear Darkness on the Edge of Town, which is daily, since the cassette is still stuck in your car stereo.

What's your name for a sub sandwich? Head over to Thrillist.com for 9 more and see if your local name made the list!

28 Must-Eat Sandwiches From Around The World

We Found Neck Gaiters For Kids That Won't Fall Off