Ms. O'Dwyer-Brinchman assumes throughout her recent book, Gustave Whitehead: First in Flight (ISBN-10: 0692439307), that Richard "Dick" Howell was the person who wrote the anonymous 18 August 1901 Sunday Bridgeport Herald article, Flying, about a supposed "flight" by Gustave Whitehead on 14 August 1901 near Fairfield, Connecticut. She repeatedly states that Howell was the "eyewitness reporter" who watched as Whitehead flew in the dead of that moonless night.

By associating Howell (who enjoyed a fine reputation) with that notorious Flying article, Ms. O'Dwyer-Brinchman seeks to bolster the article's credibility.

Yet, there is not one, not a single instance of Howell ever claiming he wrote that article. Ms. O'Dwyer-Brinchman's unproven assertion that Howell was present that night and wrote the Flying article has been adopted as a central element of proof by Whitehead supporters. 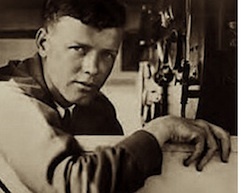 "Gus" Whitehead, who was born Gustav Weisskopf in Germany in 1874, was one of Bridgeport, Connecticut's more well-known residents, considered a genius by some and a "charlatan" and a "fraud" by others. He passed away in October of 1927, so he lived to see the time in May of 1927 when Charles A. "The Lone Eagle" Lindbergh (left) flew solo across the Atlantic.

Oddly, Whitehead is not mentioned, even in passing, in any of the coverage by Bridgeport newspapers of Lindbergh's accomplishment, when one could reasonably expect some mention of Whitehead, who supposedly made that first flight by a human in a powered, controlled, heavier-than-air machine - if the 1901 flight had ever been made. 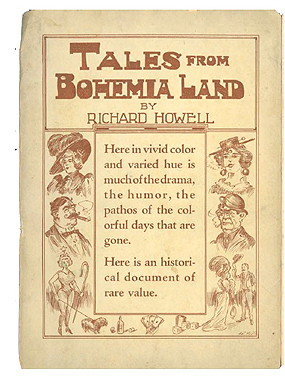 Perhaps even more odd is the utter lack of any mention of Whitehead in "Dick" Howell's 1928 book, Tales From Bohemia Land, which has story after story about the colorful characters that Howell met and knew during his 40 years at the Bridgeport Herald newspaper.

It is strange, with Lindbergh and aviation featured in hundreds if not thousands of newspapers and magazines in 1927 and 1928, that Howell doesn't mention that dark night, near dawn, when he personally witnessed the first flight by a human in a powered heavier-than-air machine... unless, of course, he wasn't present and didn't witness Whitehead fly and therefore had no reason to make any reference to Whitehead in his book.

In the sweep of "Dick" Howell's 40 years at the Bridgeport Herald, Whitehead and his story of that night would certainly have been one of the major stories of Howell's career - if it had even happened.

Something very strange underlies the absence of Whitehead from Howell's book... and obvious questions arise... was Howell avoiding any public association with Whitehead ?... was Howell reluctant to be identified as the one who had hoaxed the Bridgeport Herald's readers with the Flying story ?

The absence of "Gus" Whitehead from Howell's book is not the only instance of Whitehead as a missing person. 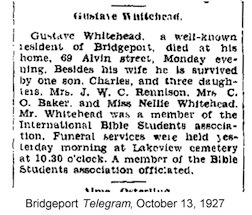 One could reasonably expect that Whitehead's obituary would mention his one great accomplishment - flying in 1901 - yet, no, there is not a single reference there either, not even a hint that anything aeronautical had ever happened in Whitehead's life. His membership in the "International Bible Students Association" (Jehovah's Witnesses) is the only mention of anything of note in his short obituary. 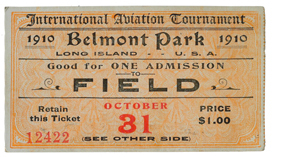 Two large aviation events happened at racetracks near New York City in 1910, the aviation meet at Asbury Park, New Jersey, in August 1910, and the aviation meet at Belmont Park, Long Island, in October 1910. Both were given heavy daily newspaper coverage around the region and across the US. Perhaps some reference to the region's first aviator, Gustave Whitehead, might be found in the thousands of column inches printed about those two aviation events... but no, not a word, not even in nearby Bridgeport, Connecticut's newspapers.

The two mentions of Whitehead found in a Bridgeport newspaper during 1910 appeared in the Evening Farmer, in June and September, in stories about a water wheel, and a helicopter Whitehead was building (it never flew). In one story Whitehead is referred to as "the noted engine builder and experimenter in aeronautics."... and makes no mention of him as the "first to fly."

The other Evening Farmer story mentions Whitehead as "one of the most expert engine builders in the world" (not as "first to fly") - and states "Back in 1901 he made a flight in an airship of the aeroplane type, out near Fairfield beach, when he soared through the air for one-eighth of a mile and astounded the few who were privileged to witness the unheralded trial." The story does not say the aerial machine was powered, so it might well have been a glider, although there are another possibilities.

Notice also the Evening Farmer article describes Whitehead's machine as an "airship," not a heavier-than-air "aeroplane."

So, the phrase "an airship of the aeroplane type" can reasonably be interpreted as referring to a winged machine suspended below a gasbag filled with lifting gas. 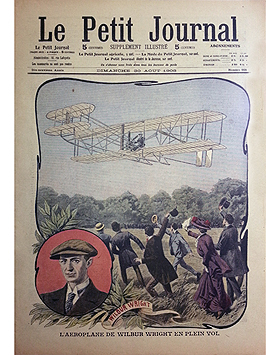 What about in 1908 when Wilbur and Orville Wright were being given vast coverage in newspapers worldwide. Wilbur, in France, was astonishing enormous crowds with his complete mastery of his Wright Model 1907 Flyer, and Orville's flights at Fort Myer, Virginia, were making headlines, including when he experienced a propeller failure and crash fatal to his passenger, Lt. Thomas E. Selfridge... perhaps then some mention of Whitehead's supposed successful flight in 1901 might have been made in Bridgeport's newspapers... but no, nothing, not a hint of anything related to Whitehead's supposed "flight" in 1901..

The false story of the Wrights visiting naive trusting Whitehead is another fabrication which has become an article of faith among Whitehead supporters.

It's difficult to come up with a reason why that story involving the Wrights and Whitehead would not have appeared in a Bridgeport newspaper in 1908 when the Wrights were in headlines everywhere - except for one... the visit never happened.

For all the extensive newspaper coverage Whitehead managed to secure during his life in the US, his supposed 1901 flight fails to appear in print at times when it reasonably ought to have - if that flight had happened.

While Whitehead supporters continue to claim that the Smithsonian Institution has suppressed Whitehead's "accomplishments," the truth is that during his lifetime, Gustave Whitehead had already become Aviation's Missing Person.

These absences are very good indicators that the story involving "Gus" Whitehead making the "first flight" in 1901 is nothing more than a myth - a falsehood from wingtip to wingtip.

Please read these Huffington Post articles about the Whitehead Myth "Gustave Whitehead and the Case of the Fallacious Photo" - "Jane's Points Finger at Editor" - "The Buck Stops Where ?" - "Editor/Aviation Historian Fails to Fly" - "David McCullough and Whitehead... and IHS/Jane's" - "Guess Who Discovered Gustave Whitehead (It Wasn't Stella Randolph)" - "Gustave Whitehead's Last Best Hope" - and - "The Last Living Witness: Memory and Deceit"
Download
Calling all HuffPost superfans!
Sign up for membership to become a founding member and help shape HuffPost's next chapter
Join HuffPost