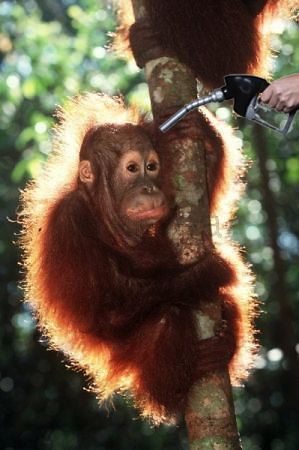 At 35,000 feet, going 400 miles per hour, things can get cold. Really cold. For years skeptics argued that a biofuel could never withstand the subzero temperatures and requirements of modern aviation. In February, however, Sir Richard Branson flew his Virgin Atlantic Boeing 747 on a biofuel from coconut oil. Some environmentalists, unimpressed with this "stunt," accused Sir Branson of wiping out the rainforest.

At the epicenter of the deforestation debate is Malaysia, the leading world exporter of palm oil. Critics argue that rising biodiesel demand leads to land clearing in order to grow high-yielding palm oil trees. Land is undeniably being deforested, but there is a larger web of cause and effect at work. While both biodiesel and palm oil production are on the rise, one does not necessarily cause the other.

Seventy-four percent of palm oil production is for food, not for biofuel (9). In fact, one out of 10 items found in a United Kingdom supermarket contains some form of palm oil.1 The use of palm oil is even more widespread in India. Even in the U.S., palm oil appears in a surprising array of products, including cookies, margarine, and peanut butter. Its excessive use is even replacing more logical choices - like peanut oil in peanut butter! Palm oil is also produced for industrial uses, including grease, glue, ink, plastics, and lastly, less than one percent of biodiesel.

The timing of the increase in palm oil production suggests that biofuels are not a principal cause of deforestation in Malaysia. Crude palm oil production grew 90% between 1995 and 2002 (2). However, it takes six years after planting palm oil for it to be ready for harvest. So, the new oil palm that was harvested and recorded in 2002, for example, was actually planted around 1995 -- long before palm oil for biodiesel became a topic of conversation. So if deforestation came before palm oil, and the majority of palm oil came before biodiesel, what was the main incentive to chop down rainforests?

Perhaps it was, and still is, money.

After six years of investment, resources, and maintenance, crude palm oil will fetch between $700 and $850 per ton on the world market (8). The largest reward, however, is the immediate bounty of thousands of dollars from selling rare wood. Malaysian Mahogany sells for $272-$283 per cubic meter (5). To obtain this wood, one simply needs to cut down trees. After the land has been cleared, it becomes a vacant lot for new crops. Crops like palm oil are an afterthought. Adrian Lake, Former CEO of the Australian Biodiesel Association has been visiting Southeast Asia over the last three years to investigate deforestation. He said, "The problem I found was that a large proportion of the land being cleared 'for palm plantation' was not being planted with palm and some of the areas being opened up had no infrastructure or population to support new plantations. Some of the areas were so steep, it would be impossible to plant with palm or any other commercial crop ... Biofuels have become the scapegoat of the on-going deforestation." Profits drive deforestation. So long as wood is a valuable commodity, trees will continue to fall.

Another point of confusion around biofuels is the rapid deforestation of the Amazon rainforest. Brazil experienced 42% of the world's net forest losses from 2000 to 2005, according to a report by the UN Food and Agriculture Organization (11). Ethanol derived from sugarcane is the primary fuel of Brazil, and often blamed for deforestation. But sugarcane does not come from the Amazon rainforest. It comes from the Cerrado, a large, open savannah that spans over Brazil, Paraguay, and Bolivia. This biodiversity hotspot has been continually cleared for agricultural purposes with an emphasis on creating pasture for cattle grazing. Reports indicate that there is pasture on 78% of this land and sugar cane on 26% (4). The production of sugarcane is internal to Brazil's domestic energy market, and not influenced by American ethanol consumption.

Soy is an equally controversial, but entirely different, biofuel-related crop grown in Brazil. Brazil is the world's number two soy producer (behind the U.S.). It is commonly believed that because of the increase in demand for corn-based ethanol in the U.S., corn is grown more widely. This displaces our domestically grown soy. This allegedly causes supply shortages, which lead to higher soy prices, causing people in far-flung markets like Brazil to deforest more land for profit from soy. Yet nothing could be further from the truth.

The demand for animal feed is the largest factor in soy production (12). Eighty percent of the soy crop is the edible meal and 20% is the oil. It's no surprise that the meal is where the money is. Brazil produces almost 60 million tons of soy annually, of which about half is exported (9). The other half is largely used to feed Brazil's growing beef industry. Brazil's meat exports are booming as they tap into new markets in the Middle East, North Africa, and Europe. Brazil's beef exports increased approximately 400% between 1997 and 2007 (10). Eleven million tons of soy from Brazil go to China each year, an increasingly meat-consuming nation. This country alone comprises about 25% of Brazil's soy exports (7). The Netherlands, the world's second largest importer of soy, uses 20% of Brazil's soy exports, mainly for animal feed (10). A minimal portion of Brazil's soybean exports goes to the U.S. and other countries that are leaders of biodiesel and very little, if any, of that soy is turned into biodiesel. Like Malaysia, a far more lucrative crop drives Brazil's deforestation.

The real driver for clearing Brazil's precious forest is cash for wood. In the last two decades, the Amazon's contribution to Brazil's total production of tropical wood rose from 12 to 90 percent, providing an estimated 30 million cubic meters of logs per year -- over a seven-fold increase.6 In essence, Brazil is trading its rainforest for quick cash, cattle feed, and grazing. Not for biofuels.

Malaysia's palm oil and Brazil's soy contribute to less than one percent of the miniscule worldwide biodiesel industry. In Europe, about 80% of biodiesel comes from rapeseed oil; most of the remaining biodiesel is from sunflower oil (9). Rapeseed is a high-yielding oil crop, which grows in colder regions such as Germany, Canada, and Russia. In the U.S., 95% of our biodiesel comes from soy. The rest comes from waste cooking oil, animal fat, and other domestic oil seeds. Thus, in the global scheme of things, biodiesel has about as much to do with deforestation as Paris Hilton's latest escapades have to do with foreign policy.

The true causes of deforestation are deeply connected to our lifestyle choices in the U.S. and in the rest of the developed world. Our choices foster a business-as-usual scenario in which profit-seeking companies run the show, small farmers get displaced, and developing countries lose control of their environmental protection. There is a right and wrong way to grow crops. There must not only be stronger enforcement of sustainability standards, but incentives for people to abide by them. Combined with a variety of energy sources, biodiesel from non-food sources can reduce our environmental impact. The future of biodiesel is not in palm oil or soy or corn. The future of biodiesel is in an "ecology of alternatives," which includes algae, waste, crops grown on marginal land, and a new set of lifestyle choices.

The next time you eat a cookie off of your Mahogany table that was brought to you on a diesel-fueled transportation backbone, consider this: everything you touch, everything you buy and everything you eat comes at a price. Part of that price you pay up front, and part of it is externalized to people in the "developing world" and to future generations. Before we point the finger of blame at technologies like biodiesel, societies like Brazil, or politicians we must first confront the consequences of our own actions.