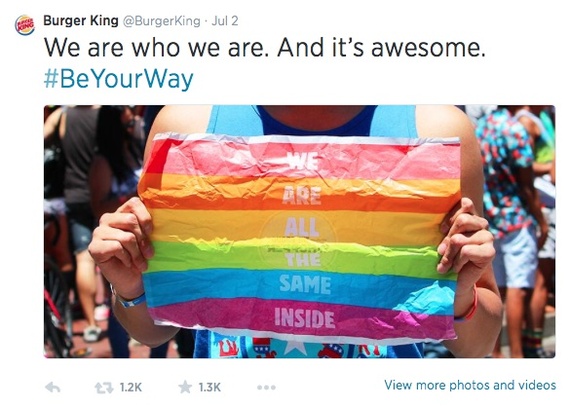 With much fanfare, Burger King claimed to introduce a new burger at this year's San Francisco Pride. The blurb for the YouTube video asks, "What made this burger different?" Spoiler alert: Nothing. It was the same Whopper as always, but in a rainbow-colored wrapper emblazoned with the message, "We are all the same inside," with sale proceeds going to the Burger King McLamore Foundation to provide scholarships for college-bound LGBT students.

Immediately, the social networks gushed with praise for Burger King's support of the LGBT community. But given Burger King's general silence on LGBT issues thus far, many were left wondering whether this wasn't just some elegant sleight of hand, an attempt to put fresh packaging on the same low-grade substance. And it highlights how tricky corporate social-responsibility initiatives can be, particularly those anchored in the PR-friendly level of cause marketing.

Jordan Bach, a corporate consultant and gay-rights activist, told USA Today that "a campaign that shows the company understands diversity and really believes in the profound acceptance of other people ... can change minds and hearts at the deepest level."

But how deep does it go?

It wasn't long before the Human Rights Campaign (HRC) weighed in with a reminder of Burger King's less-than-stellar record on promoting LGBT equality in the workplace. On the HRC Corporate Equality Index (CEI), Burger King scored a middling 55 out of 100. To be fair, Burger King's major shortcomings were not on the "mainstream" gay-rights issues, such as domestic-partner benefits and employment protections based on sexual orientation. According to the HRC's Beck Bailey, Burger King's score "reflects, among other things, a lack of employment protections on the basis of gender identity as well as a lack of base level health care coverage for transgender employees." Those "other things," by the way, also include the lack of an officially recognized LGBT-employee association, and a lack of adoption assistance for same-sex couples.

Those left unimpressed by the "Proud Whopper" promotion were quickly shamed by others for being ungrateful for Burger King's "gift" to the LGBT community, and the HRC was accused of overemphasizing an issue seen as marginal even by many gays, lesbians, and bisexuals.

But while transgender individuals fight for acceptance from gays, lesbians, and bisexuals, for companies it seems that transgender issues are less-controversial terrain. Coca-Cola and Pepsi both scored a perfect 100 on the CEI, while McDonald's and Yum! Brands, which owns KFC, Pizza Hut and Taco Bell, managed a respectable 80 and 90, respectively. Fully 86 percent of CEI-rated companies provide employment protections on the basis of gender identity.

Fernando Machado, Burger King's Senior Vice President of Global Brand Management, told USA Today that the "Proud Whopper" promotion and the unveiling of "Be your way" as Burger King's revised brand slogan "showcases who we are as a brand," adding, "It shows how we, as a brand, believe in self-expression." As a brand, perhaps, but apparently not as a company, which only serves to highlight how Burger King raced past the meat of the issue in its headlong rush for some good publicity. For this promotion to have been meaningful, Burger King should have gotten its own practices in order before preaching equality to others. HRC's Bailey notes, "While Burger King's gesture is nice and the scholarship fund is incredibly welcome, workplace equality in the form of policies, practices and benefits should be a fundamental focus of fair-minded businesses."

Furthermore, the promotion was limited to one restaurant (located along the San Francisco Pride parade route) on one day, and the company says that it has no plans to expand the promotion, though it may plan something bigger in the future. It all smacks a bit too much of test marketing rather than authentic understanding of and concern about an issue.

The bottom line is that 17 years after Ellen DeGeneres came out on national television, 16 years after the debut of Will & Grace, three years after the repeal of "don't ask, don't tell," and a year after the defeat of DOMA, and with marriage equality now favored by a majority of Americans and quickly spreading as the law of the land, Burger King stepped meekly out of the closet on an issue that already has popular support and doesn't risk alienating too much of its customer base. It is great that Burger King has finally gotten on the bandwagon, but merely playing catch-up is hardly cause for pride and celebration.

The lesson here is two-fold: For the LGBT community, it is that having pride means more than accepting crumbs from the table. Progress is more than hollow slogans and pretty packaging of the same-old substance; the ingredients and the process matter. This means that the lesson for Burger King and other companies that want to distinguish themselves by engaging communities on important issues is that social responsibility is no longer a matter of if but of how and especially why they do it.