Last night on "Geraldo At Large," Fox news showed footage of the body of model Ruslana Korshunova, 20, who had died Saturday in a fall from her 9th-floor window in Manhattan's Financial District, an apparent suicide.

The footage showed Korshunova lying partially uncovered on the street at the scene, her profile and upper body clearly visible in a long shot which seems to zoom in from the other side of a police vehicle behind yellow crime-scene tape (see below).

The shot, labeled 'EXCLUSIVE' in the upper left-hand corner, was a long one, shown in fullscreen and then again in half-screen as Gerlado Rivera talked to his guests. The later showing was interspersed with B-roll of Korshunova walking on the runway and in glamour shots.

There are no hard and fast rules about showing dead bodies on TV. Generally, it is a custom dictated by taste and a news imperative; certainly showing a body under a sheet gets the point across. When it is done, it is considered noteworthy — for example, the coverage of dead bodies in New Orleans during Katrina, in Myanmar last month following the cyclone disaster; showing images of the Saddam Hussein execution, before, during and after. For newspapers, the same caution applies — even this year, on the fifth anniversary of the Iraq war, it was notable that New York Times ran a photo of dead Iraqi soldier on the front page. Generally, news organizations avoid running photos with identifiable faces.

There are rules about some things, of course — the Pentagon prohibits photographing of the flag-draped coffins of fallen soldiers, and takes great pains to keep them hidden from view. But, though Fox has certainly seemed to honor that policy (and reacting with great outrage if offending images are ever shown), in this instance, the editorial discretion is their own.

So: Is this really as gratuitous and exploitative as it seems? A long shot of Korshunova's dead body does not show the scope of a natural disaster or the ravages of the battlefield, nor does it show proof 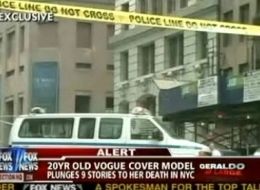 from a corrupt regime that a tyrant is dead. It does, however, cater to a certain ghoulish curiosity. Is Korshunova's death news? Of course — but it doesn't need to be so graphically illustrated. A sustained shot of Korshunova's face, her face pale in death, clearly visible in profile with what appears to be blood at the side of her mouth — that adds nothing to the story other than a horrific, shocking image to gawk at.

The clip is available here; we're not embedding or screengrabbing for obvious reasons. Or maybe not so obvious, I guess; well then, call it editorial discretion.

Update: Per TVNewser, David Clark, EP of weekend programming, said: "It was a producer error and we deeply regret it."