If journalists had been diligently following the science, or lack of it, from day one of the catastrophic explosion of the BP Deepwater Horizon wellhead, perhaps Gulf Coast residents would not now be faced with the only two options that remain on the table since the wellhead has been capped.

Depending on whom they turn to for answers, the environment is either safe or they are facing imminent doom from the "black wave." Of course, neither scenario is accurate, and the truth could easily end up buried in the mud beneath marsh grasses in Barataria Bay or under the sugar white sands of Pensacola Bay-- along with the oil.

There are two forces at play here. Media has totally abandoned traditional tenets of journalism and no longer reports the facts, which in this case unquestionably need to be based on hard science and on-scene observation. Blogs are read and interpreted as gospel, and mainstream media seems to adhere to political pronouncements as a competing gospel.

Many bloggers and journalists alike focus on wild accusations, assumptions, and interpretations instead of reporting what they see, and if an explanation is necessary, going to reputable scientists who may be able to shed light on the observable world. Events are reported second-hand, not vetted, and rumor and innuendo abound.

Most likely, BP's attorneys are salivating as they begin formulate defense plans and organize subpoenas of witnesses who will wilt on the stand. Remember the do-gooders at the OJ Simpson trial? They were made to look like idiots. The man who heard the "plaintive wail" of Nicole Simpson's dog comes to mind.

This is especially troubling when one realizes that the painfully inadequate "BP Deepwater Horizon Oil Budget: What Happened to the Oil" document, which the administration quoted in a White House press briefing last week, is riddled with speculation. The report says that all but 26 percent of the 4.9 million barrels is "gone," and that any remaining oil is so diluted that it does not matter, implying that the crisis is over.

A scientific team, including the Coast Guard, the EPA, and led by the National Oceanic and Atmospheric Administration (NOAA), used assumptions about the nature of the oil after it was combined with the dispersant Corexit. NOAA has been under constant fire for using the original estimate that the well was leaking only 5,000 barrels a day for weeks after the wellhead ruptured.

This report does not contain one shred of evidence based upon use of the scientific method, which demands first and foremost that the correct question be asked. The question must be about something that you can measure, preferably with a number. Rigorous collection and testing as well as duplication of results are required before any conclusions are drawn.

In effect, the administration bases their sunny outlook on a four page, 1800 word document that uses a simplistic pie chart to declare that the majority of the oil from the Macondo well explosion has vanished and uses the word "estimate" 22 times in making these assertions. The facts resulting from measurable data are a glaring omission.

Is there such a thing as a "precise estimate?" If not, the document stands as a four-page oxymoron.

We asked Dr. Samantha Joye, University of Georgia (UGA) professor of marine sciences at Franklin College of Arts and Sciences about the estimates. Joye was a member of the NOAA-supported expedition that discovered the deepwater plumes thousands of feet below the surface in the Gulf of Mexico, earlier this summer. The group sailed from Gulfport in late May on a scientific mission to characterize and visualize the largest of the underwater oil plumes, estimated to be more than 15 miles long, 5 miles wide and some 300 feet thick at depths ranging from approximately 2,300 feet to 4,200 feet. This plume was located to the south/southwest of the Deepwater Horizon site.

So, what is the value in the "Oil Budget" report based solely on estimates and no hard data? Dr. Joye responds:

The only value in that report that is not an estimate is the oil recovered by the siphon ship. All the others values are obtained from model output or mass balance (e.g. by difference). Because these numbers are 'estimates' constrained by little actual data and because the estimates probably have associated with them fairly large error bars, I do not find the budget convincing. Furthermore, of the evaporated/dissolved fraction (roughly 25%), only 10% is likely evaporated so the other 15% is still floating around out there. The refractory, dissolved and dispersed oil components REMAIN in the system. So rather than 75% having 'disappeared', I would argue that probably close to 60% of the oil is still floating around in the seawater invisible to our eyes but having exerting continued effects on the system for sure

Did Dr. Joye see any evidence of rigorous science and the application of the scientific method? Isn't an error of plus or minus 10 percent meaningless when dealing with millions of barrels and gallons of oil?

This oil budget reflects an exercise in approximation/estimation yet no error bars are given on any of the reported values. I suspect this is because the error bars are rather large.

Dr. Joye offered some valuable insight on the infamous oil and dispersants "dissolving like sugar in tea" statement.

This comparison is somewhat misleading because it suggests that sugar dissolved into water "disappears". It is invisible to the eye, yes, but it still exerts a strong effect on the solution, mainly it sweetens the tea! I would use such an analogy in the different way: Dispersed oil in seawater is much like dissolved sugar in tea -- both are invisible but both exert strong impacts on the respective solutions, sugar by sweetening the tea and oil by exerting positive (possibly increasing microbial metabolism) and negative (toxicity effects) affects on the biological components of the system.

The world faces the difficult challenge of understanding exactly what has happened to the ecosystem of the Gulf of Mexico in the uncertainty of the aftermath of the April 20 explosion of the BP Macondo wellhead. Eleven human beings died, as well as uncounted wildlife, and the implications of the application of 1.84 million gallons of the dispersant Corexit are uncertain and unknown.

No one is comfortable with uncertainty except scientists. It is reasonable to assume that the political administration of Barack Obama wants all uncertainty about the lingering effects and potential environmental damage completely out of the headlines by November's mid-term elections. BP sees legal and financial risks in uncertainty. Journalists and bloggers often see uncertainty as evidence of a cover-up or conspiracy.

Scientists, on the other hand, view uncertainty as their cue to get to work to find answers by rigorous testing of hypotheses, based on observable and measurable results. Joye thinks it could take as long as next March, a year after the disaster began, before concrete answers begin to emerge. She is especially worried about methane levels that could be 100,000 time higher than normal that could not only affect oxygen levels in the water, but ozone levels in the atmosphere as well.

But Dr. Joye is also concerned about what she calls a "clouding" of the facts and possible loss of necessary and valuable funding mechanisms to measure exactly what is happening beneath the surface.

I'm very concerned that funding for research will wane and much of my concern stems from the report released last week concluding that most of the oil is gone. The fact is that at least 50% (probably closer to 60%) of the oil is still out there, it's just not on the surface, and it will continue to have effects. Further, officials continue to refuse to admit/discuss the impacts of methane and other alkane gases that were also emitted from the wellhead. Methane and other gases were not mentioned in the "oil budget". Those hydrocarbons are trapped - for the most part - in the deep water and their metabolism will continue to have impact(s) on the oceanic system. We have to keep our eye on the ball, so to speak. There's a lot more work to be done. I'm very concerned that many things (including the impact of hydrocarbon gases) will be ignored and thus we won't fully document and understand the impacts of this horrendous hydrocarbon spill

The facts will not come easily and cannot be based on opinions or guesswork. It may take years, if not decades to fully understand what happened in the Gulf of Mexico in the 106 days that oil spewed from the broken and faulty BP wellhead. It will take funding, it will take time, and it will take exactitude to put all of this into perspective. Now is not the time for media to leave and move on to the next catastrophe or the next book or movie. Now is the time to dig in for the long haul until dedicated scientists and researchers can analyze real time data, establish a baseline, and watch and wait as to how the environment will respond to this unprecedented disaster. What we don't know is staggering. In the meantime, journalists have a moral responsibility to keep their eyes on the Gulf. This catastrophe will likely turn out to be more than today's headlines. It could very well become become the headline for a generation of Gulf Coast residents.

So where is the oil? Drew Wheelan of the American Birding Association had no trouble finding it this weekend. 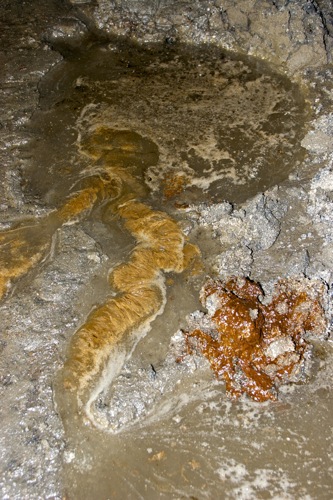 Thick oil is revealed on the beach at Grand Isle's State Park after clean up crews use an auger to take 30 inch deep core samples that show oil from the deepwater horizon oil spill exists on several levels beneath the sand. 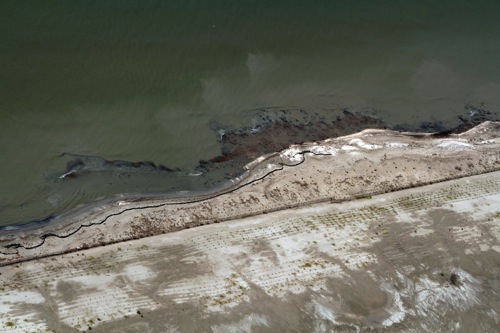 Aerials are courtesy of Southwings Aviation

"This shot (above) of the Timbaleir Islands in Terrebonne Bay shows heavy oil and saturated boom still on the beach on August 6th. Though clean up crews have been working in many areas for over two months to clean the oil, the vast majority of Louisiana's affected coastline has not seen the aid of one shovel," Wheelan said.

Public opinion, manipulated by media and political expediency will not change how nature has responded to the unparalleled amounts of Corexit dispersants and millions of gallons of oil that have been dumped into the Gulf of Mexico. Saying the oil isn't thereby using a made-up "OIl Budget Calculator" will not change the facts.

Our solar system formed 5 billion years ago with catastrophic natural forces in play that eventually shaped the earth. Nature functions under a grand set of natural laws, and although it is true that humans have manipulated, shaped and in some ways destroyed the environment, nature is not subject to public opinion.