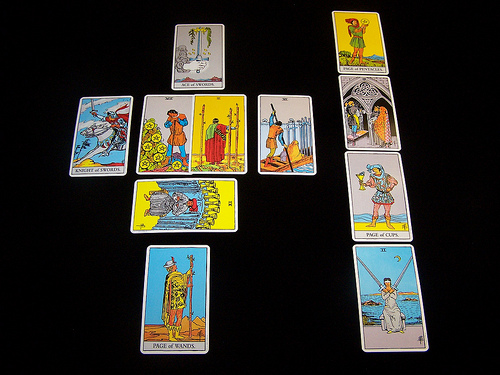 A grand bargain may not be in the cards for the congressional supercommittee tasked with negotiating a deficit-reduction deal that cuts at least 1.2 trillion from the federal deficit over 10 years. They still have a couple weeks until their Thanksgiving deadline, but, if current trends prevail, you can rule out a big, bipartisan deal of major significance, the tarot cards say. Indeed, if tarot were poker, this would be one weak hand. How much does this hand suck? Let me count the ways.

First, in tarot terms, this hand has no heft -- there are no cards from what we call the "major arcana" in tarot. The major arcana cards denote importance and significance, but all we have here are minor cards.

Second, just as in a regular deck you have queens and kings, in tarot we have what are called "court cards." The court cards in this spread are all lower ranking, with nothing rising above the level of a Jack. Again, weak. The supercommittee players are coming to the table with low expectations. The Knight of Swords in the Past position suggests the supercommittee has lost its mojo.

Third, this spread contains two cards that symbolize partisan gridlock, and their placement is particularly unfortunate.

Let's take a closer look at some of the cards. The Seven of Pentacles and Three of Wands in the center of the spread, with the Ace of Swords above, indicate that the supercommittee is diligently focused on doing their job -- they are carefully assessing America's debt problem, looking to the future, and trying to come up with a plan. But the Nine of Cups in the Obstacles position indicates that Republicans are rigidly holding the line, rejecting a Democratic plan that reduced the deficit by 3.2 trillion by cutting 500 billion from entitlement programs and raising 1.3 trillion in new tax revenue.

Democrats, for their part, are dug in, too. The Two of Swords in the Attitude position suggests that virtually all the players are coming to the table in an uncompromising frame of mind. Because it failed to increase revenue, Democrats rejected a Republican plan that reduced the deficit by 2.2 trillion with a mix of entitlement cuts and tax code revisions.

If a Grand Bargain appears to be off the table, do these cards at least offer some hope that a deal could be reached to reduce the deficit by 1.2 trillion and avoid triggering automatic draconian cuts from social programs and the defense budget? Yes. The Six of Swords in the Future position shows movement. This is far from over -- the supercommittee is still on the journey. The Three of Pentacles in the position of Hopes and Fears indicates that, while they may have given up, for now, on a grand bargain, the members of the supercommittee still hold out hope of getting a deal done.