As you read through the liner notes for Walt Disney Record's Legacy Collection version of The Little Mermaid soundtrack (which is this terrific 2 disc exploration of the Academy Award-winning score that Howard Ashman & Alan Menken wrote for this 1989 Walt Disney Animation Studios release), there's an anecdote in there that's sure to blow pop culture fans' minds. It reveals how Ashman (who not only wrote the lyrics for this John Musker / Ron Clements film but also helped shape its story & characters) wanted Ursula the Sea Witch to be ... 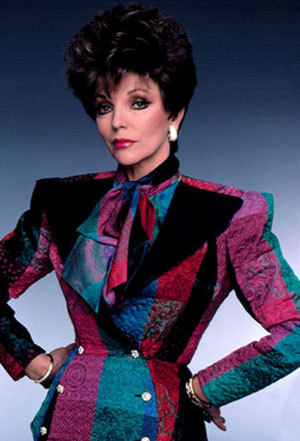 ... a Joan Collins-type, a la her prime time soap "Dynasty," in her rivalry with Triton

Which -- I know -- sounds kind of bizarre. But as Allan Neuwith revealed in his excellent behind-the-scenes book, Makin' Toons: Inside the Most Popular Animated TV Shows and Movies (Allworth Press, April 2003), Howard wasn't just looking for a Alexis Carrington clone.

Ashman -- then a huge fan of the TV show Dynasty -- had hoped that the role would be spoken and sung by Joan Collins. Clements and Musker, on the other hand, were picturing Beatrice Arthur (of 'Maude' and 'Golden Girls' fame), in their heads, and even described Ursula that way in the script. 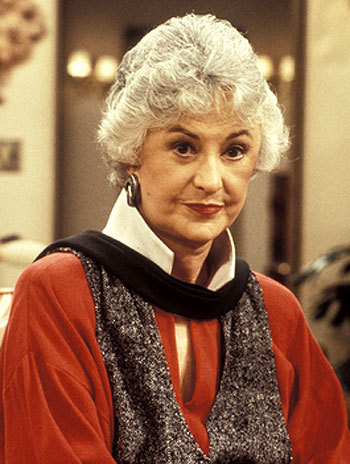 And given that "Golden Girls" was being produced by Disney's Touchstone Television division, Ron & John thought that they'd then have a piece of straight pipe when it came to recruiting Bea for this project. But what they hadn't counted on was Arthur's agent. As Neuwith explained in "Makin' Toons" :

When (Musker & Clements) actually went after Bea Arthur for the part, they were -- surprisingly -- rejected by her agent, who seemed livid at the suggestion that her client could even be thought of as a witch. "Her agent, I guess, read the script, and it described the witch as having a Bea Arthur-type basso voice ... but she just read it, somehow in her mind, like we were saying Bea Arthur is a witch," Musker surmised. "I don't think she even gave it to her."

And given that Ashman had been similarly stonewalled by Dynasty producer Aaron Spelling (Spelling supposedly thought that Ms. Collins' star power would be seriously undermined if she did something as common as voice a cartoon character. Which is why Aaron reportedly wouldn't allow Joan to even audition for The Little Mermaid), Walt Disney Animation Studios now had to mount a year-long search to find just the right actress to voice Ursula. 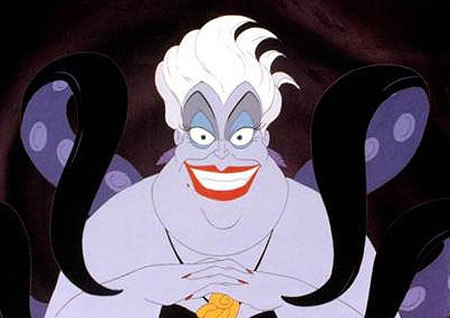 Mind you, WDAS wasn't just searching for someone to voice the Sea Witch. At this same time, they were bringing in all sorts of actors to audition for other roles in Disney's The Little Mermaid. As John Musker revealed during a recent interview with the "Part of Your World" website:

Jim Carrey read for Eric. Bill Maher read for Scuttle, as did Michael Richards. Rosanne Barr came in to read for Carlotta the chambermaid, and Howard was so amused by her nasal voice he pulled us aside and said how about letting her read for Ursula? So we did. I am still amused as I recall hearing, "Flotsam, Jetsam, you divine little vipers!" in that distinctive Barr twang. 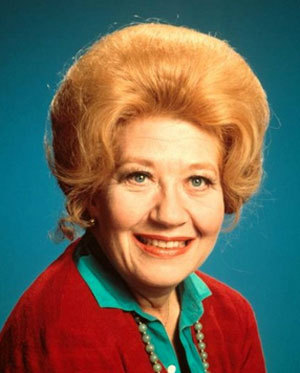 According to Musker, Ashman initially really loved Stritch's take on the Sea Witch:

It sounded like Ursula had a few belts before Ariel swam in. It was an eccentric, loopy reading, a bit like Johnny Depp's Jack Sparrow.

But at the same time, Ron & John really enjoyed the performance that Charlotte had given when she was auditioning for Ursula. So to determine who would ultimately win the opportunity to voice the Sea Witch, Walt Disney Animation Studios set up a second set of auditions. Only this time ... 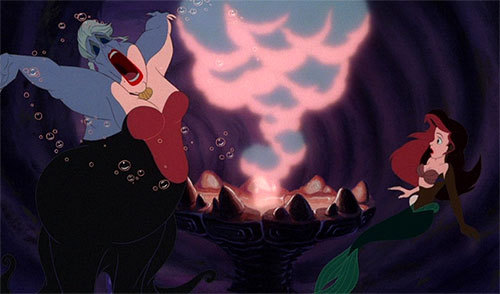 ... The test now would be how both these actresses performed (Ursula's signature song, "Poor Unfortunate Souls"). So Charlotte did the song out in California, and Howard supervised Stritch's performance in New York. Unfortunately, as wonderful as Charlotte Rae was, the demands of Howard's song didn't suit her voice.

So with Rae now out of the competition, Musker & Clements now waited on word from Howard as how Elaine's audition in NYC had gone.

(Finally) the phone call came, but it was not what we had expected. Howard was curt. "Elaine's out..." What had happened we wondered? 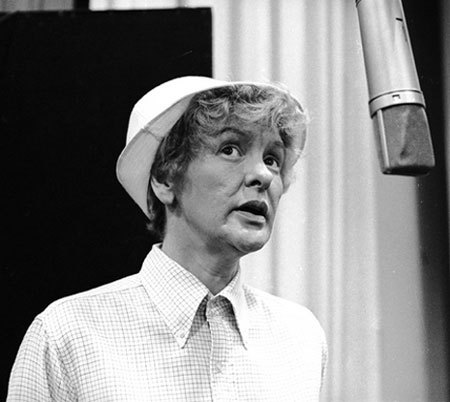 As Allan Neuwith recounted in Makin' Toons, the reason that Ashman had let Stritch go was because she hadn't responded well to his style of directing.

For one thing, "she wouldn't (perform 'Poor Unfortunate Souls') at the tempo he wanted," Musker says. "Howard, with all his songs, he was kind of Svengali-like ... and he would sing the demo for them. He was the witch, and he was the crab, and he would shape those performances. He would really channel himself into those people to do performances that he kind of initiated." But Stritch didn't respond to that kind of prompting. She was also fighting a long and now self-admitted battle with the bottle, which didn't help matters. They had to let her go.

Ron Clements heaves a sigh. "So we had these two leading contenders, and then, suddenly, we didn't have either of them. And then we had to go through 'another whole group of auditions ..." 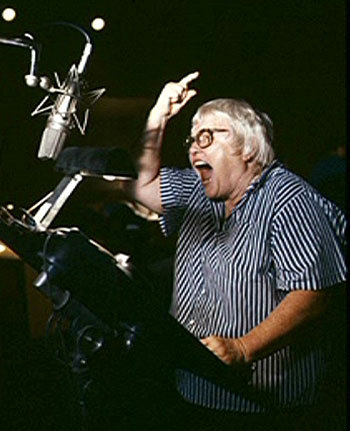 Enter Pat Carroll, who -- thanks to all of the years that she'd spent working in the theater -- quickly understood what Howard Ashman was trying to do with his style of directing and then allowed him to help shape her performance as the Sea Witch. Again from Neuwith's "Makin' Toons" :

Many of the embellishments that make Ursula's number so chillingly provocative came from Howard Ashman. Ursula's catchy "innit" in place of "isn't it," for example, was pure Ashman. (Pat) asked, "Howard, can I use that?" He said, "Of course, I wished you would!" These "attitudinal things," as Carroll calls them, often came from the lyricist's own reading of the lines.

Which brings us back to the Walt Disney Record's Legacy Collection version of The Little Mermaid soundtrack. One of the more entertaining & informative aspect of this 2-disc soundtrack is Ashman's own performance of "Poor Unfortunate Souls." Once you get to listen to these tracks on that recording, you can then see how closely Pat followed Howard's lead. As Carroll recounted to Neuwith for "Makin' Toons," once she'd heard Ashman perform this German cabaret-inspired song ... 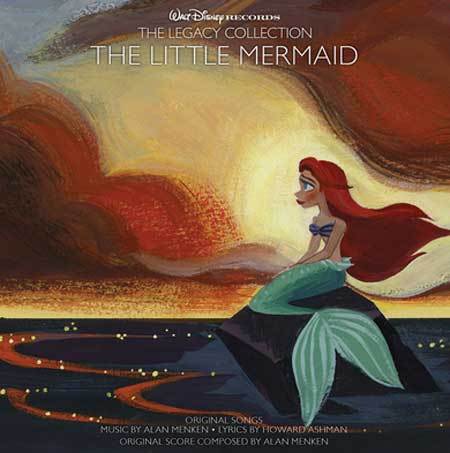 "... I said, 'I got you, Howard. I know exactly what you want.' He gave me that performance! Come on, I'm honest enough to say that. I got the whole attitude from him ... and his shoulders would twitch in a certain way, and his eyes would go a certain way ... I got more about that character from Howard singing that song than from anything else."

That's the great thing about Walt Disney Music's Legacy Collection. These 2-disc sets not only feature the most complete soundtracks ever released for these particular Walt Disney Pictures and Walt Disney Animation Studios productions, they also feature terrific liner notes and all sorts of bonus tracks. Which then allows the listener to have a deeper understanding & appreciation of how these projects actually came to be.

Which brings us to the next release in the Legacy Collection, the 4-disc set for Fantasia which just hit store shelves earlier today. One wonders if -- among the tales that will be shared on this Walt Disney Record's liner notes -- they'll then tell the story of how Dracula himself, horror legend Bela Lugosi visited Hyperion Studios back in November of 1939. Just so he could then pose for Disney animators there and be filmed as the live-action reference for Chernabog, the massive demon who drives the story in Fantasia's "Night on Bald Mountain" segment.