If you were sick in ancient Greece your body's chemicals were simply off-kilter- -a bad mix of the four bodily humors: blood, phlegm, black bile and yellow bile.

There are four seasons (for now), four legs on a chair and four balls for a free base -- but only two parties running the country. Have you had much luck on a two-legged stool lately?

Wouldn't it be great if, like mood rings, we could glance at someone's wardrobe and know who we're about to ask to babysit your kid? The Scots had it right -- you could spot an enemy clansman running up the heath by the pattern of his kilt. Even in the Harry Potter series, my own kids walked around the house with Griffindor's gold-and-red scarves. Now if our congress were forced to wear such identifiers from their lobbyists, it might be easier come election day.

Men From Mars, Women From Venus, Dogs From Pluto...

My wife had everyone in the family take a survey recently that, after a series of questions, told us how we rank types of love (e.g. physical contact, acts of service, kind words, etc.). Its purpose was to help us each understand the other's perspective. For example, after the bedroom is still a mess, the "acts of service" mom least wants from the sobbing "physical-contact" daughter a hug -- but that hug is tops on Abby's chart.

It reminded me of a Harry Potter app my kids had me use to determine which house in Hogwarts I'd be placed--Slytherin, it appears When I announced my placement, I was looked at with surprise by a few -- like I had just announced I'd served time.

Harry Potter is known for many things such as reinvigorating reading for children, offering the best rags-to-riches example of all time and allowing Orlando to squeeze in one more theme park.

But I'd also point out that...

But in light of our current "all-or-nothing" two-party system, where the other guy is the bad-guy and mission number one is to topple said bad guy--no matter how many noses and despite how many faces--I have come to believe that the only true method of running our country may be with Rowling's sorting-hat. 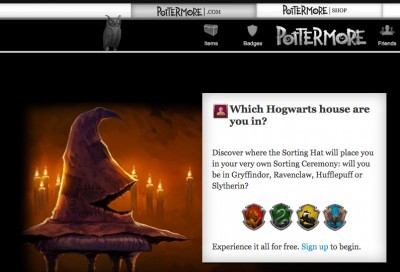 The Sorting Hat game at Pottermore.com, Rowling's own website.

The Hogwarts Four-House System of Government

Seemingly contrary to Lincoln's "House-Divided" warning, Hogwarts runs effectively through the eons with its four distinct houses--each recognized for its own unique gifts it brings to the whole. Each of Rowling's four houses echoes the four humors and their emphasis on the heart of Griffindor, the liver of Slytherin, the spleen of Ravenclaw or the brain of Hufflepuff--each organ vital, but incapable of self-sufficiency.

In her first book Harry Potter and the Sorcerer's Stone, young Harry has just been informed that he has magic and there is a world for him outside of his terrible suburban broom-closet. He is is marched with all the other newbies into a great hall where a hat is placed on his head that proclaims his dorm--Gryffindor, home of the brave. The Boston Red Sox equivalent of Gryffindor's Yankees is the evil empire of Slytherin. Harry and we readers are predisposed to not like the slimy cellar-dwellars. It's a house of greedy, sneaky, evil old-money snobs. We never get to meet the moderate-Slytherins; only the extremists like Malfoy, Crabbe and Goyle (again, such wonderful names that would fit perfectly in Oliver Twist).

But by the end of the seventh book, we are all, Harry included, forced, through thousands of pages, hundreds of deaths, the demolition of the government and the walls of the castle itself, to acknowledge that there might be a person or two worth saving down in S-Town.

So let's take a look at the four houses of Hogwarts and see if the ballot in November might look a little different than it does now, escaping for a minute the Republican choice or the Democrat choice--with the occasional third-party challenger like John Anderson in 1980 and Ross Perot in 1992 serving to do no more than toss-out the incumbent. What if all four parties could compete throughout the year for the right to run the government--but only through cooperation and co-existence not character assassination?

The One Question That Determines Your House...

To quote one of my favorite high school teachers, "If someone held you up in a dark alley, what would you say" to the following.

How do you see the United States?

Granted you can have hybrids of the above. But which is the answer you would place on top? Like Chapman's love-languages, it's fun to take the quiz but equally fun to guess how your friends might take it. So let's do the same with some fan-favorite presidents, looking at the up-side and down-side of them spending too much time in the same dorm. 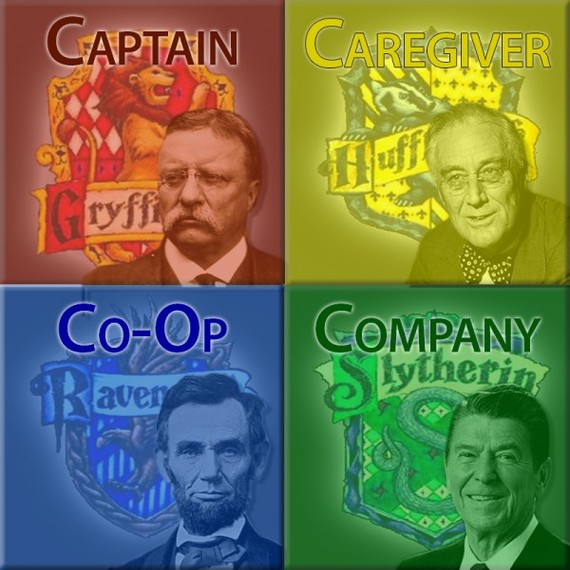 Teddy Roosevelt--Griffindor: The Nation as a Captain

If you believe that the primary purpose of the United States is to serve as a moral compass whose destiny is to lead by strong example, you're probably a Griffindor like Teddy Roosevelt. His bravery was legendary, bordering on foolishness. He had the foresight to create our national parks, create child labor laws and breaking monopolies--yet he wanted the United States to become an empire seeing it as our rightful turn to mount the throne of the world and the Philippines, Cuba and Panama Canal neighbors would generally be glad they've got our brave protection.

Rowling points out that bravery alone, without a little street-smarts can be dangerous. Harry is constantly lectured that the predictability of his rash courage is his Achilles heel.

World Wars I and II began with the United States being attacked. Korea and Vietnam began halfway around the world to stop a threat that hadn't attacked our shores. Teddy's cousin Franklin knew, after seeing that without the full support of the people a war could not really be won. FDR held back the isolationist United States for two years before the Greatest Generation would feel obliged to make the world safe for democracy.

Abraham Lincoln--Ravenclaw: The Nation as a Co-Op

If you see America as a large condominium complex, it makes sense to the Ravenclaw to share the costs--even if the road you're paying for may never be driven on by you. Distributing the load makes it lighter for everyone. Ravenclaw is practical, if nothing else.

The quick answer to the question, "What is Lincoln best known for?" is "He freed the slaves." But Lincoln was a canny lawyer whose primary goal was to preserve the union. The wedge between north and south was slavery but the real issue, as he much more eloquently put it, discusses the collapse of that sub-divided house--echoing the Greeks and their knowledge that a spleen on its own is relatively useless.

Lincoln was generally under the dark impression that he was not worthy, all while becoming famous for his long-stories and one-liners. While all the southern states wanted him gone, nearly half the north did as well as they rioted his draft and Maryland was held at gunpoint to be part of the north. His greatest accomplishment was logical, not heroic. His long-view of what could happen if states could just break off when they disagreed made him generally unpopular--until, as he would dryly observe if he could, his funeral.

The motto of Hufflepuff might as well have been carved on the Statue of Liberty's tablets. Before he met Eleanor, before his polio, Franklin D. Roosevelt was anything but empathetic. He idolized his cousin Teddy for his courage and Griffindoritis--the same way little boys admire firefighters, cowboys and pirates. But Eleanor was raised without his charm and loving parents. Her schooling in France taught her social responsibility and caring for the less fortunate, which she transferred to Franklin as she toured him through the slums of New York.

If you believe that, like the Pilgrims and most of our ancestors who sought not only freedom from poverty and oppression but freedom to co-exist with their neighbors, it would make sense that you belong in this house. Social Security and the FDIC's protection from closed banks are staples now, designed to protect everyone, not just Roosevelt's class. But when he introduced them, he was seen as Lenin.

Ronald Reagan--Slytherin: The Nation as a Company

The green of money, the snake, the easy-target of Reagan as a bad guy may be as obvious as "Snape did it" throughout all the Potter books. While it seems unlikely that his removal of striking air-traffic controllers or incredible reduction in taxes on the wealthy are as true as Severus's love of Lilly Potter, it makes sense that Slytherins have some good. Fellow dorm residents would certainly include Henry Ford, Bill Gates, J.D. Rockefeller and even Bill Clinton with his landmark decisions to allow Comcast to rule the universe. The Captains of Industry and their immense profit--particularly during Roosevelt's war years, is testament to the benefits of allowing business to run its course and trickle down to the middle class. Reagan was an inspiring leader, the "great communicator" who outspent the Soviets and brought down a wall.

But like any excess from any of the houses, the lack of a counter-balance can be dangerous--and sometimes the trickle can be turned off completely.

So, what if you removed the electoral college and just let folks go to the polls and vote for their four Americas--red, yellow, blue or green. Could it get any worse in our off-humoured time? One nice thing, the lobbyists and slanted "news" channels would be spread a little thinner--at least for a few years. At least with four legs on your chair instead of just two, if one gets a little big you just shift your weight and not crash to the ground.