One of the principal reasons atrocities like the Charlie Hebdo massacre continue to occur is because "freedom of speech" means entirely different things in different countries.

The Western View In the United States, freedom of speech means, plainly stated, that we all get to say more or less whatever we like. There are limits, of course. But generally speaking, Americans believe society benefits by allowing folks to express highly divergent points of view, even when everyone else completely disagrees with those positions. Nothing is sacrosanct in our interpretation of free speech, and therefore no person is safe from challenge or ridicule. This acts as a sort of safeguard against groupthink, narrow-mindedness, and ultimately tyranny. As one astute writer put it, in the West, "we prefer an equilibrium of mockery, rather than an equilibrium of terror and censorship."

Europe, generally speaking, takes a somewhat similar view; except that our brothers and sisters on the other side of the Atlantic focus more on maintaining human dignity than providing free individual expression, which partly accounts for European countries' greater willingness to demand websites like Google remove information that violates an individual's right to privacy if leaving it up reduces that person's ability to live a happy and successful life. Even the Pope is weighing in with the European view.

The Eastern View Outside the so-called West, freedom of speech takes the European interpretation one step farther toward protecting the rights of entire groups of people to live in dignity, untormented by ridicule or hate speech. Here the primary focus of free speech protections is driven by the belief that that people matter, that everyone should have the right to live undisturbed by what someone else says or thinks about them, without feeling attacked by harmful speech.

While this interpretation may seem counter-intuitive to many Americans, even wrong perhaps, within the context of more homogenous societies - particularly those with a single dominant religion, ethnicity, or monolithic political structure - it is frequently the norm. Freedom of speech means the freedom not to be disturbed by someone else's speech.

Whether we agree or not, it's important we understand this distinction if progress toward peace is to be made. 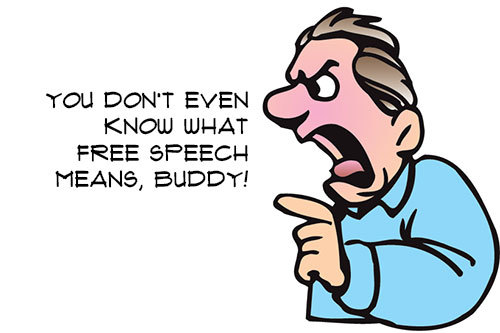 Actually, Everyone Limits Free Speech To help us understand the disparity, we must first recognize that no one anywhere actually endorses freedom of speech without limits. And the borders to our various tolerances tell us a lot about what we really believe. Post a threat to someone on Facebook, for example, and you'll quickly discover America has rather strict limits about what free speech it will accept.

Case in point: If you clobber someone over the head in America, you'll generally be charged with assault. But if you use a racial slur or homophobic rant while doing so, the charges filed against you will rapidly escalate to the much more severely penalized category of hate crime, an indication that we really believe words hurt, and an acknowledgment that our speech is not actually as free as we say it is. Most people in our nation have come to accept this tradeoff as a useful way of deterring the escalation of discrimination, hate crimes and bullying.

Likewise, in the generally tolerant Germany all you need to do is draw a swastika to be sent to the cooler. While in Sri Lanka, sporting a tattoo of the Buddha can get you deported. Even America's staunchest ally in the Gulf Region, Saudi Arabia, throws folks in prison and beats them if even a simple tweet feels insulting.

The Problem of Interpretation The problem is that far more countries are now using the same moniker - freedom of speech - than used it in the past, but they each have rather different understandings of what that expression actually means.

Unless we share a common definition of what "free speech" means, tragedies like what happened in France last week will continue occurring, if not even escalate.

To help reduce this tension, we need to educate one another about what our cultures really mean when they talk about free speech, not just resort to pontificating and finger pointing when things go wrong, or we'll continue to speak (and act) past one another.

Are, for example, pictures of an historical figure's exposed rectum, testicles and other private bits [NSFW link] meaningful satire, as Charlie Hebdo claims? Or do such images rise to the level of inflammatory hate speech? The answer to this question divides our understanding of what constitutes freedom of speech today.

Which "freedom of speech" do you believe in? Join the poll below to give voice to what you think, and find out where others stand on this issue!