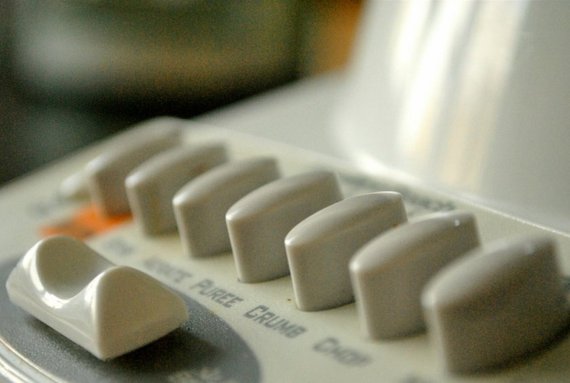 To juice or to blend, that is the question. With new cold-pressed juice brands popping up on the shelves of coffee shops and grocers quicker than Chipotle stores are becoming contaminated (which seems to be pretty darn fast), even the least observant observer could tell you that cold-pressed is beyond trending. It's an astronomically hip market that is being tapped into more and more by the minute.

Those on the quest for near-perfect health and nutrition are always seeking out what's "best" and "healthiest," so, to those of such a mindset, cold-pressed juices obviously trump other juicing methods. We'll touch on that in a second, but what's probably a more pressing (pun!) issue, however, is whether or not there's any nutritional difference between juicing and blending fruits and vegetables. You may be surprised to see that yes, in terms of bodily benefits, there is one method to liquefying produce which reigns supreme over all of the others. We'll start with some of the basics.

What's Wrong With Traditional Juicers?
When put tête-à-tête with traditional centrifugal juice extractors, cold-pressed or masticating juicers produce a better product nutritionally. Your run of the mill centrifugal juice extractor utilizes a quickly spinning metal blade, resulting in the decimation of many beneficial enzymes that the fruits and vegetables you're juicing contain in their unadulterated form. These enzymes are destroyed because of the heat that the spinning blade produces, and the very same generated heat is responsible for oxidizing nutrients. The result? Less nutritious juice.

OK, Centrifugal Juicers Suck. Why Don't Cold-Pressed Juicers?
Cold-pressed juicers do exactly what their name suggests (funny, the way it is): They slowly but ever-so-surely crush and press the fruits and vegetables you put into them, resulting in both a higher nutritional yield and a longer lasting juice. To say a cold-pressed juicer made no heat would be scientifically inaccurate, but they do produce a lot less heat than the spinning metal blades of nutritional death (enzymes' bane, if you will) used by their centrifugal counterparts.

Is There a Difference Between Juicers and Blenders?
No. Article over.

Just kidding, yes: There are some big differences on both a micro and macro level when it comes to centrifugal juice extractors and blenders. The larger scale, macro-level differences appear in consistency. A blended apple has much more solidity to it than a juiced apple, and there are also clear differences in taste. Regarding the smaller, more cellular level, Foodmatters.tv says:

"Juicing is a process which extracts water and nutrients from produce and discards the indigestible fiber. Without all the fiber, your digestive system doesn't have to work as hard to break down the food and absorb the nutrients. In fact, it makes the nutrients more readily available to the body in much larger quantities than if you were to eat the fruits and vegetables whole." While this is great for those who want quickly digesting nutrients, the fact is that a juiced fruit or vegetable loses its valuable fiber content in addition to some of the nutrients contained in its skin.

Time for the Plot Twist:
Between cold-pressed juicing and blending, blending seems to be the healthiest plan of action if you want to drink your plant-based foods. But, like any good novel, the tale of blending versus juicing has a plot twist: Both of these methods pale in comparison to simply eating your fruits and vegetables raw (a novel idea and, perhaps, a novel novel idea).

Robert Davidson, PhD, Director of the Nutrition and Human Performance program at Logan University, has this to say about consuming raw fruits and vegetables:

"Whole foods or nearly whole foods, as opposed to processed foods, offer us the most nutritional value. For example, eating a whole apple and drinking apple juice are very different -- when you juice an apple, you are essentially processing it, and you lose a lot of the fiber and nutrients present in the whole fruit, which are important for optimal nutrition. Juice can be part of a healthy diet, but it should supplement your intake of whole fruits and vegetables -- not replace them."

There you have it. If you really want to get the most out of your produce, you should eat it raw. If you feel a burning desire to drink your fruit or vegetable, blending it would appear to be the second best method, followed by cold-pressing it, putting it through a centrifugal juice extractor, and dipping it in chocolate in that order.