Music was Curtis "50 Cent" Jackson's second career. News reports say he began dealing crack at the age of twelve, after the murder of his coke-dealer mother. Early tracks like "Ghetto Quran" and "How to Rob" reflect a brutal, street-hustling life, and Jackson has the bullet wounds to match. He's talented, wildly successful, and I sure wouldn't mess with him.

But when he starts mixing social media with pumped-up investment pitches, 50 Cent is moving into Goldman Sachs territory. "Fitty" reportedly earned millions for touting a stock on Twitter, without disclosing that he owned shares in the company. How does that stack up against Goldman's own social media deal with Facebook? When you move into the stock market, you're going where the real gangstas roll.

We're in the middle of a much-needed national dialog about harsh and violent rhetoric, and rappers like 50 Cent have been singled out again for criticism. I'm opposed to music censorship, but I get the concern. Even some of the best rappers glamorize things I despise. Yet even as some politicians wag their fingers at hip-hop criminals, their other hand's stretched out for campaign cash from corporate lawbreakers. Sometimes the difference between crime on the Mean Streets and crime on Wall Street is just a matter of degree.

And don't think the language and lifestyle can't get rough on Wall Street. Morgan Stanley's brokers had a now-famous phrase, used whenever they sold their own clients bad investments: "I ripped his face off." It was a Goldman Sachs executive who praised another employee for selling Goldman clients on a program he described as a "shitty deal." (That guy's now a senior exec at Bank of America.) And the depositions in Goldman's sex discrimination suit read like the script to a rap video: female employees pressured to join a party in a topless bar, a woman pinned against a wall and forcibly kissed, a Christmas party with female escorts wearing "short black skirts, strapless tops and Santa hats."

Throw in some beats and a few "uh-huh's" and "yeahs" and you've got yourself a video.

"Ok ok ok my friends just told me stop tweeting about HNHI so that we can get all the money. Hahaha check it out its the real deal."

50 Cent tweeted about a marginal stock all weekend and into early Monday, calling it "BIG MONEY" and saying "you can double your money right now." The effect was mindblowing: 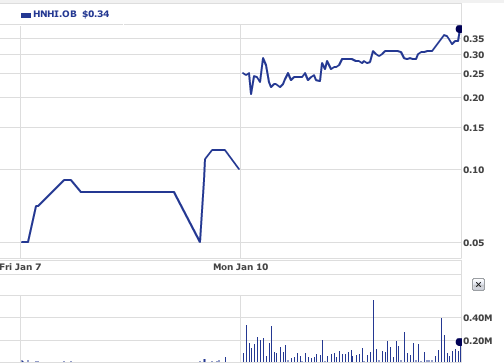 Jackson's credited with moving the stock of a company called HNHI by $50 million dollars in one day, even though its own auditor reportedly "expressed concerns about its financial future." Fitty didn't mention that he held 30 million shares of the stock, which he picked up for $750,000 last fall. Yesterday's surge reportedly netted him somewhere between $8.7 million and $10 million. No wonder so many news accounts repeated the name of his hit album, Get Rich or Die Tryin'.

HNHI increased in value by about 200%. Even after it dropped more than 23% today, Jackson was way ahead of the game. Fitty's attorneys presumably got a little worried, because the disclaimers started appearing late Monday: "HNHI is the right investment for me it might not be for u! Do ur homework," "I own HNHI stocks thoughts on it are my opinion. Talk to your financial advisor ..."

How does Fitty's Twitter run compare with Goldman Sach's Facebook deal? Goldman consolidated a number of its clients into a single artificial "investor" to get around a legal requirement that any company with more than 500 investors be publicly traded and subject to the regulations that protect investors. Felix Salmon observes that this deal is bigger than many IPOs, but doesn't have to follow any of the same rules.

Goldman sure knows how to create a feeding frenzy. They wouldn't let anybody into the deal for less than $2 million -- a surefire way to make the marks salivate -- and touted the deal shamelessly to its clients: "When you have a chance I wanted to find a time to discuss a highly confidential and time sensitive investment opportunity... If you agree not to use information that we reveal to you... I will be able to disclose the name of the company and provide you with more information..." Former Goldmanite Nomi Prins captures the essence of the deal: create an artificial bubble and then "pawn off the overpriced goods on the clients." As Prins notes, Goldman's giving itself the option to unload this investment if it goes bad, but it's locking its clients in until 2013.

Knowing Goldman, they'll also be shorting Facebook somewhere along the way. The country learned their M.O. after the last crisis by reviewing their internal emails, and by the cynical and lawless way they played clients in the ABACUS deal. To avoid legal trouble this time around, Goldman's even disclosed in advance that it may short Facebook. Goldman skims a lot off the top, then lets you buy into a deal so skewed that one of its own funds turned it down. In return, you get to say you own a piece of Facebook. Maybe they'll even give you a nice certificate you can hang on the wall of your Las Vegas investment property.

Does that mean Facebook is this year's version of Vegas real estate? Could be. Even the most successful business has a real and an inflated value, after all, and I tend to agree with Douglas Rushkoff and others who say Facebook's going to fade away like MySpace did.

Think about it: Facebook has a badly designed interface, it's difficult to use, and it continues to irritate and infuriate its customers. Poorly-managed companies can thrive for a while, but not forever. And the Goldman deal sidesteps the very public accountability that might encourage Facebook to make the changes it needs. But whatever happens to Facebook, the Goldman deal's a bubble machine designed to inflate its price. If they take Facebook public in 2012, they could ride an initial wave of "BIG MONEY" hysteria to a quick killing, then cash out while their own customers are still locked in. "Hahaha check it out ."

And Goldman's tapped the mother lode: the US government. As Simon Johnson points out, their Facebook investment is backed by the Fed -- and therefore by the public's dollars. The money boys have knocked off Fort Knox.

Goldman invested $75 million in Facebook early on through a hedge fund. Now they're saying they've put $450 million of their own money into this deal, but they get that money at the ultra-low Fed rate the government gives them. So they don't need to earn the same returns their clients do. What's more, they're charging at least $60 million in service fees, and they can unload their investment whenever the bubble deflates.

So how does 50 Cent stack up against Goldman -- morally, ethically, and legally? For one thing, Mr. Jackson is not a bank or investment manager and doesn't claim any special financial expertise. Fitty doesn't receive low-rate loans through the Fed's discount window. Neither he nor his company, G-Unit Records, received a Federal bailout. 50 Cent did not receive $13 billion in taxpayer money as a "backdoor bailout" through AIG. (Disclaimer: I used to work at AIG.) And 50 Cent has never paid himself a nickel, much less a huge bonus, after being rescued with Federal funds.

Goldman wouldn't admit that it misled clients about its ABACUS product until it was time to plea bargain its way out of SEC fines and potential criminal charges. Until then Goldman execs congratulated themselves for dumping bad investments on their clients. Now that's cold. Fitty, on the other hand, copped to his actions right away.

On the rhetoric front, 50 Cent's pretty rough: "I'll hit your vertebrae, rip through your tissues/your wife on the futon huggin' the shih tzu." Goldman's more genteel -- but some of its political allies aren't. Most of its campaign contributions are placed through intermediaries -- in this case, the GOP Senate and Congressional Committees. Some of the candidates funded by these groups have used a lot of violent rhetoric, like threatening "Second Amendment" reactions (i.e., gun violence) to decisions they don't like,firing guns at targets with their political opponent's face on it, and suggesting they would issue "hunting permits" for "liberals."

If there's a difference between this rhetoric and 50 Cent's, I can't see it. (And despite all their populist Tea Party rhetoric, these candidates have come through for their Wall Street patrons. )

The chorus to the "shih tzu" song is "I'm laughing all the way to the bank." But 50 Cent has an actual product -- music -- so he's a part of the productive economy, not the financial sector. Curtis Jackson's a self-made success who came up the hard way, with talent. If Kanye is rap's F. Scott Fitzgerald, its chronicler of the high life's pain and pleasure, 50 Cent is its Jim Thompson. He's the poet of blood and bullets. His raps remind me of what a great jazz bass player once told me about that instrument: that it stands on the borderline between melody and percussion. 50 Cent raps on the border between prose and percussion.

There's no evidence of criminal behavior in either Curtis Jackson's Twitter move or Goldman's Facebook deal. But 50 Cent has proved that the so-called "rational" "free market" is neither. And Goldman has proved that Wall Street is still up to its old tricks, getting rich creating bubbles and then getting even richer as they pop.

No, I don't like the violent language. Or the sexism. Or the glorification of bad behavior. But enough about Wall Street: I don't like those things in music, either. One of the things worth remembering about language is that it reflects deeper values. If we despise what these words reflect, we shouldn't tolerate the behavior.

UPDATE: A commenter observes that 50 Cent may have violated SEC rules, which of course is possible. My disclaimer about "no evidence of criminal behavior" meant that I wasn't claiming to pass legal judgement on either Curtis Jackson or Goldman Sachs - I don't have all the facts, am not a judge or attorney, etc. - but rather to make larger ethical and social points.

Behavior doesn't have to be criminal to be wrong. And next to Goldman Sachs, 50 Cent is small change.

(Here are two videos for your enjoyment: 50 Cent and Lloyd Blankfein. Play them at the same time for the proper effect.)