First off, psychopath doesn't just mean someone who cuts you up with a chainsaw -- though the majority of people who do things like that are psychopaths. What's the definition?

So which professions (other than axe murderer) do they disproportionately gravitate towards -- or away from?

Via The Wisdom of Psychopaths: What Saints, Spies, and Serial Killers Can Teach Us About Success: 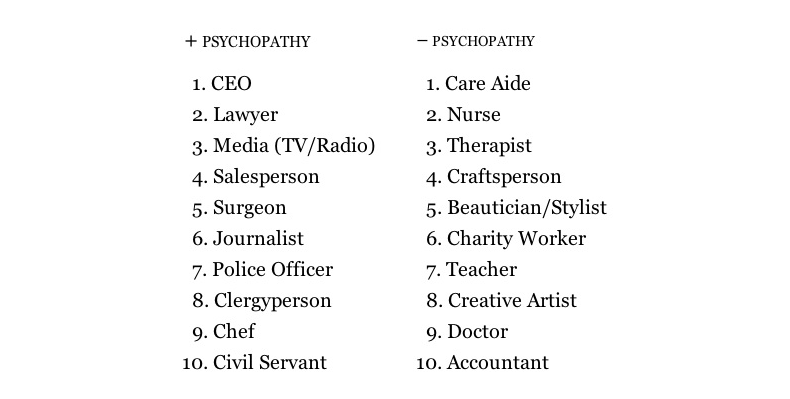 And the next thing that comes to mind is: Why?

Most of the professions on the right require human connection, dealing with feelings and most of them don't offer much power. Psychopaths, by their very nature, would not be drawn to or very good at these things.

On the other hand, most of the roles on the left do offer power and many require an ability to make objective, clinical decisions divorced from feelings. Psychopaths would be drawn to these roles and thrive there.

Chef? Really? I guess it pays to tread lightly around anyone who has a set of knives bearing their initials.

This article originally appeared on Barking Up The Wrong Tree.