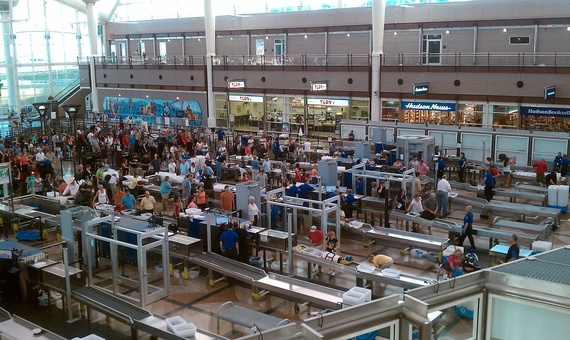 Much like you think your city has the worst traffic and your bars are full of the worst people, you probably also think your local major airport has the worst security wait times. But as you shuffle behind the guy who forgot to remove his shoes, and curse yourself for not signing up for TSA Precheck, remember one thing: there's probably an airport that's worse. Unless you're flying out of LAX.

But to find out which of America's airports actually DO maintain the absolute slowest security lines, we teamed up with the folks at MiFlight, an app that tracks wait times at 150 airports worldwide. To the surprise of absolutely nobody (we were only half joking above), Los Angeles International tops the list with an average slog of 40 minutes. Read that again: FORTY MINUTES. Jaw-dropping to most, but probably imperceptible to a group of people use to spending two hours in traffic every day.

Just for kicks, MiFlight also gave us the longest recorded waits in aviation-security history at the ten slowest airports. The record... a staggering 3-hour-and-51-minute mess at New York's John F. Kennedy International. Yeah, travelers could have watched Escape from New York TWICE and still not have escaped.

Anyway, here is the full breakdown by average and longest wait.

More: The Best Airport Bars in America, So You Can Survive Your Layover

To find out which 5 airports have the longest security lines in the nation, get the full story at Thrillist.com!

Every Question You've Ever Had About Flying Answered by a Pilot