As members of Congress continue to bicker and stall over the federal government shutdown, tens of thousands of people descended on the U.S. Capitol to redirect the conversation back to immigration reform.

On October 8, I was arrested along with faithful partners, committed organizers, and community leaders in Washington, D.C. We stood together, were handcuffed together, and led away together for one purpose -- to tell Congress to get back to work on compassionate immigration reform. We hope that by momentarily suspending our freedoms, we give voice to the millions of people denied theirs every day.

As a leader in the Unitarian Universalist religious community, I felt compelled to come to Washington, D.C. as part of a 3-day event that began on October 5, National Day of Dignity and Respect, to bring attention to the 11 million immigrants currently being held hostage by the federal government because of inaction.

Immigration reform isn't just a religious or partisan issue -- it is a moral issue. Equality is not only a religious value, but a basic American value: there should be no "second class" U.S. citizen. One's immigration status does not change their worthiness of basic human and civil rights. No one should be despised or scapegoated. No one should be criminalized unjustly. No human being is illegal.

When I was elected the first Latino president of the Unitarian Universalist Association, I felt a sense of duty to bring attention to this issue. From the beginning of my presidency in 2009, I championed immigration reform as a moral issue within the Unitarian Universalist community leading to the adoption of our Statement of Conscience "Immigration as a Moral Issue" at the UUA's 2013 General Assembly.

In 2010 in Phoenix, Ariz., along with local partners and Unitarian Universalists, I was arrested for civil disobedience in an effort to combat Arizona's anti-immigrant law, SB1070. Afterwards, we worked with our UU state networks to defeat Arizona "copycat" bills across the nation and to support immigrant-friendly legislation. And we joined with other leaders of faith calling on President Obama to suspend deportations and grant administrative relief to migrant families while we wait for Congress to act.

It was a long struggle to finally convince Congress to pay attention to the issue of immigration reform. We must not let them turn their backs on 11 million people now. We must not let families continue to be torn apart. We cannot let our elected leaders fail us. We have the votes in the House of Representatives to pass immigration reform with a path to citizenship--we just need the House to schedule the vote. And that is why the time is now. The consequences of inaction would be devastating for so many people living in this country--just this summer nearly 50,000 people were deported. We cannot let that number rise anymore. Please add your voice to mine. Contact your senators and representative today.

I invite you to stand on the side of love with me. Love keeps families together. Love respects the inherent worth and dignity of all people. And love has no borders.

While Government Shuts Down, Immigration Reform Steps Up
October 8: Calling for Immigrant Dignity and Respect 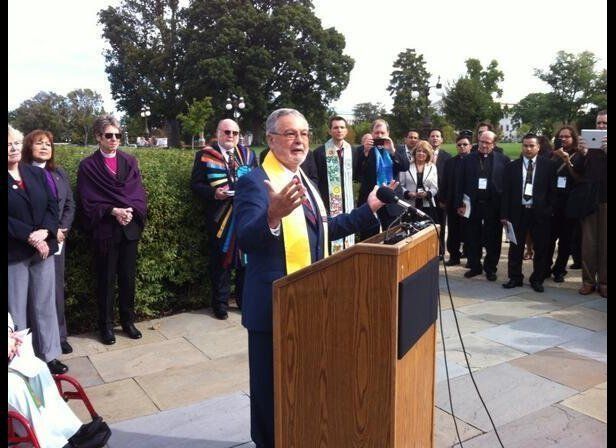