Listen in to this companion podcast on SiriusXM POTUS 124.

To understand the hows and whys of Bernie Sanders' spike and Hillary Clinton's stall, look no further than the plays they're running. Two recent CNN sit downs serve this purpose, beginning with Brianna Keilar's interview of Clinton: 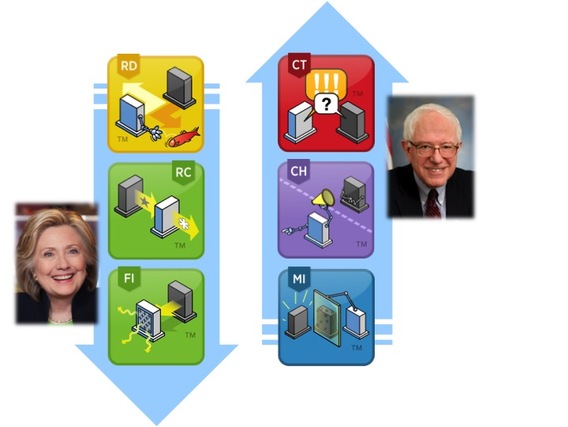 Hillary on distrust: "I can only tell you that's been a theme that has been used against me and my husband for many many years...I trust the American voter a hundred percent." Clinton's reference echoed her "vast right wing conspiracy" comment in 1998 and is evidence of a Red Herring to divert attention from other explanations for her trust problem.

Hillary on 33,000 deleted emails: "Everything I did was permitted. There was no law, there was no regulation, there was nothing that did not give me the full authority to decide how I was going to communicate....I chose to turn over 55,000 pages...and now I think it's kind of fun." As with questions on trust, Clinton opted to ignore the essential point by emphasizing what she turned over rather than what she deleted. Her strategy was a combination of framing plays, the Filter and Recast.

Tough questions are to be expected, but what this interview demonstrates is the determination of the media, at least by CNN, to mine for plot lines over policy. Keilar's remaining questions focused on Donald Trump (which Clinton dispatched for no material gain), closed media policies (which Clinton deflected), women on US currency (which took Clinton off-script), and Clinton's impersonators (which only promoted the unflattering farcical takes of Amy Poehler and Kate McKinnon). 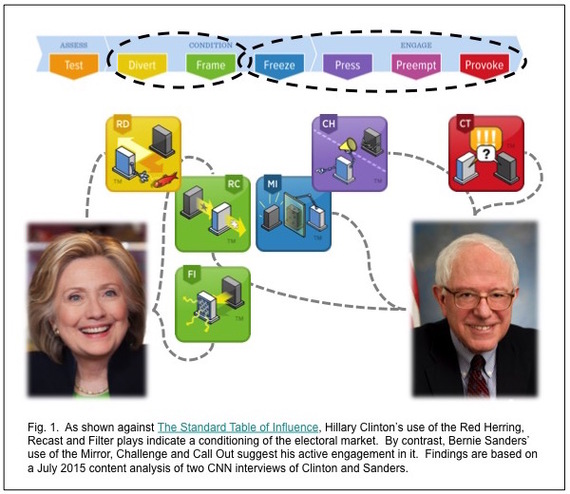 In comparison, recent and similar inquiries of Bernie Sanders have been more about policy than plot lines. Consider this Jake Tapper interview of Sanders:

Bernie on gun laws: "We have been yelling and screaming at each other for decades with very little success...Guns in Vermont are not the same thing as guns in LA or Chicago...We need a sensible debate about gun control that overcomes the cultural divide about guns in this country...I think I can bring us to the middle." Like Clinton, Sanders sought to Recast the question but, different from his rival, was able to fashion his answer as a more up-beat Challenge to take action.

Bernie on income inequality: "When you do have major American corporations...not paying a nickel in taxes that has got to change. We have to dampen down speculation on Wall Street, tax havens and increase tax rates...because all of the income is going to the top one percent." Sanders' plays were high-engagement and his footing was offensive, running Mirrors to tick off his claims and Call Outs that'll tick off Republicans.

Where Hillary was left to answer questions about currency and comedy, Sanders was asked about direction and strategy. What would your cabinet look like? Tapper asked. It wouldn't dominated by Wall Street, Sanders promised. "I want a cabinet that is focused on rebuilding the crumbing middle class, demanding that the wealthiest people at large corporations become part of America and do not live as an island unto themselves." No Red Herrings, Recasts or Filters to dodge a tough question. Just a Fiat to answer an easy one and to say where his candidacy will take us.

Whereas Clinton is left to run diverting and framing plays of the conditioning kind, Sanders has the luxury of using pressing and provoking strategies of the engaging ilk (see fig. 1 above). In fairness, one is having to defend past deeds while the other comes with little such baggage. But that, nonetheless, is where these candidates sit this hot summer, 500 days from the 2016 election.